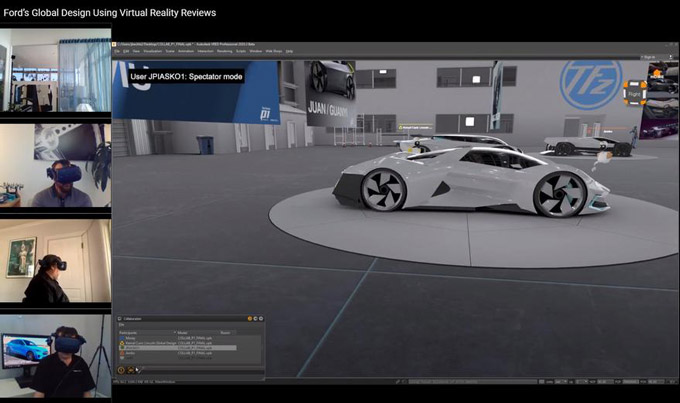 Designing a new vehicle requires an enormous cross-functional effort from engineers, product developers and designers to give Ford customers the best vehicle possible. You would expect collaborating would become difficult when the Ford’s Australia Design Studio was affected by the stay-at-home order of the government because of COVID-19. Ford’s design team leveraged technology and used Virtual Reality (VR) and turned their living rooms into the Australia Design Studio.

Ford’s use of VR technology for designing was originally developed as a way for key stakeholders from around the world to work together from their respective offices. An engineer or designer working from Ford’s headquarters in Dearborn, Michigan could simply log onto a meeting with a designer in Melbourne, Australia, using teleconference software similar to what you would use while working from home. This technology is often used during the different design reviews or checkpoints which vehicles in development have to pass in order to continue the journey to production.

To answer the demands of working from home, Ford Australia distributed high-performance computers along with HTC® VR goggles and hand controls to key designers so work could continue on future vehicles. Much like design reviews, the Ford Australia design team logs onto a virtual meeting so their work can continue from the safety of their homes. Designers on the virtual meeting are represented by avatars, which their coworkers can interact with, just like the players in an online videogame.

The VR system uses the same data that would typically be used to build a physical clay or foam model for evaluation. The software used in conjunction with the VR goggles can create a digital version of the clay model and can place the vehicle anywhere in the world. For example, the VR system can simulate the vehicle in an outdoor plaza and can replicate how light and shadows affect the appearance of the vehicle just like in the real world. Designers can also use the headsets and hand controls to enter the cabin and manipulate controls and touch points.

VR allows design teams and key stakeholders to study both the body and cabin of the vehicle without having to be in the same room or even the same time zone. The avatars representing stakeholders are equipped with laser pointers to help them point out specific elements during their discussions. With designers having this technology it allows them to continue working from home as if they’ve never left the design studio - customers can expect Ford to keep developing future vehicles for their driveways.

Designing a vehicle is an immense task, and while nothing can replace physically being present around the vehicle, the health and safety of every team member is the utmost priority.