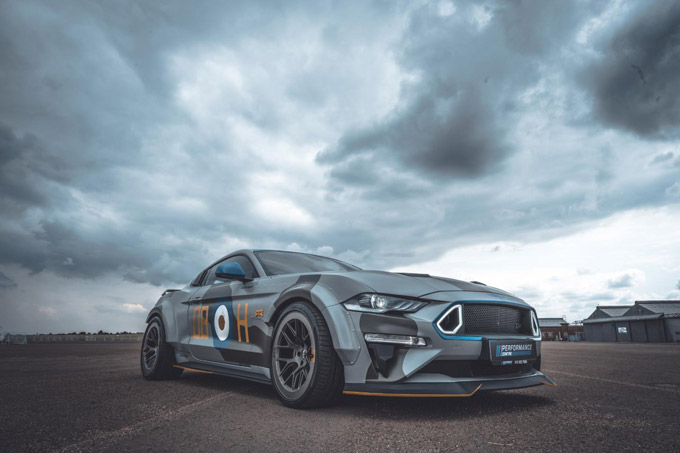 The last remaining Spitfire warplane in South Africa took a step closer to achieving its first flight after more than twenty years, following the purchase of a unique Mustang created between Vaughn Gittin’s authentic RTR Vehicles, Performance Centre, the South African Air Force (SAAF) Museum, and Friends of the SAAF.

During a handover event at the Swartkops airbase on 12 February, the excited new owners collected the keys to this one-of-a-kind Mustang and in the process made a valuable contribution to the overall restoration of Spitfire #5518. The Spitfire warplane was flown by the British Airforce and Allies during World War 2 and remained in service until the 1950s. The Spitfire’s elliptical wing design gave it a top speed of nearly 600km/h - higher than many other warplanes during the time.

This unique collaboration was formed with the sole purpose of converting ten standard 5.0L Mustangs into RTR Spec 5 wide body versions, each based on an accurate interpretation of South African aviation history. With every ‘Spitfire’ Mustang, Performance Centre will make a donation of R75 000 which will go towards the repair and restoration of this iconic Spitfire, which crashed at Swartkops airbase in the year 2000.

The first finished Mustang has already enabled the construction of a new hanger where work on Spitfire #5518 can begin. This includes placing the aircraft on a full-sized rig that was previously too large for the existing hangers at Swartkops airbase.

Through the Warriors of the Sky program, prospective customers can choose one of the listed South African airmen and their military aircraft as inspiration for their own unique Mustang. After this point Performance Centre, based in Centurion, will carry out the full list of upgrades.

The first of these special iterations is the DBH RTR Spitfire Mustang, which is the first Mustang RTR Spec 5 wide body in the world and shares a slice of provenance with Ace Capt. Bob Rogers. Rogers was assigned to 208 Squadron (RAF) in Egypt, where he ﬂew Hurricanes and Spitﬁres in North Africa, Sicily, Italy and Austria. By December 1943, he had been promoted to Lieutenant Colonel and placed in command of 225 Squadron, RAF. For his services he was awarded the Distinguished Service Order (DSO) and Distinguished Flying Cross (DSC).

To maintain absolute authenticity and credibility, every cosmetic detail on these hand-painted supercharged Mustangs is significant and replicates the insignia from those aircraft flown by famous South African airmen in World War 2. On this Mustang, this includes the yellow markings on the wheels which mimic those found on the propeller’s leading edges. The badge on the Mustang’s nose is named after the manufacturer of the Spitfire’s propeller and the dash plaque inside the car is made from an actual piece of the crashed Spitfire plane.

Upgrades carried out by Performance Centre, in Centurion, on each Mustang are comprehensive, including engine, brakes, alloy wheels and interior. The supercharger kit has been specifically developed for the new 5.0L V8 and features dual-fuel, high-pressure direct injection and low-pressure port fuel injection technology for increased power and efficiency. Power is raised to 710hp while adding a distinctive soundtrack.

“It’s been really great to work with these teams; the support from all involved has gone far and wide. The car specifically was a labour of love and we welcome the new owners to the family. I think it’s important that whoever bought this car understood and appreciated the heritage. This is the most iconic vehicle we’ve ever done and we trust that this is the first of a whole lot more we’ll be doing,” says Grant Askham, CEO of Performance Centre.

“Passion and emotion have always epitomised the Mustang nameplate and these are highlighted by this unique collaboration,” says Atloli Lesela, Brand Manager at Ford South Africa. “It’s hard not to get goosebumps when you see how this Mustang has brought everyone together for a worthy cause. This is only the first chapter in a much bigger story but it’s off to a very encouraging start that is already taking the Spitfire a step closer to the sky.”

Pricing (including purchase price of the vehicle and Vat)

Contact Performance Centre for more information by mailing This email address is being protected from spambots. You need JavaScript enabled to view it.