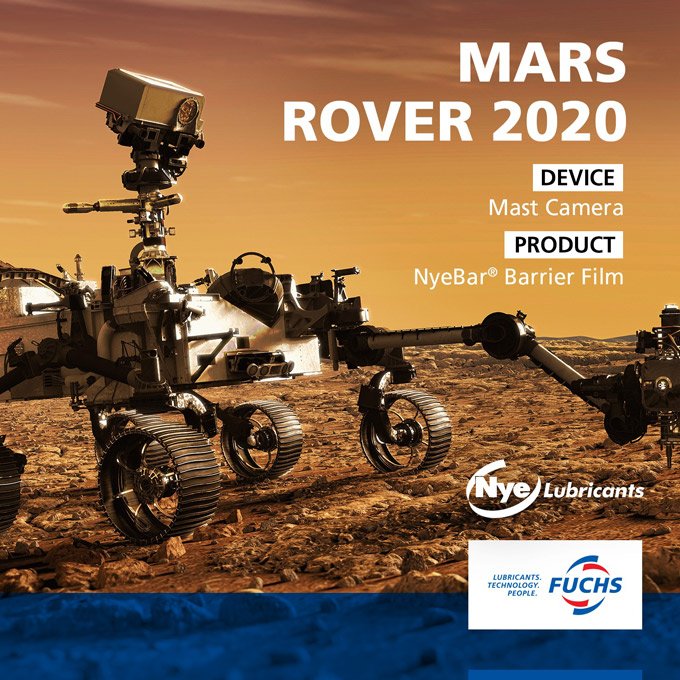 The Mars Perseverance Rover now operational on Mars is using a barrier film from FUCHS Lubricants member company, Nye Lubricants, a manufacturer of specialty lubricants for space applications and critical applications in the automotive, medical and semiconductor industries.

The Mars Perseverance Rover uses the company’s NyeBar Barrier Film formulation which plays a critical role in preventing oil from migrating to the Rover’s mast camera and compromising the image. A thin coating of NyeBar is also used to protect printed circuit boards by repelling moisture, oil and attendant dust entrapment.

“Due to the extensive development time required for space projects, it can often be years between when we sell a grease and when it actually launches. It always feels like a great accomplishment when we see these projects come to fruition,” explained George Mock, president of Nye Lubricants.

Recommended whenever reliability or lubricant migration are a potential problem, NyeBar fluorocarbon barrier films control oil creep and prevent corrosion. Liquids will spread upon or ‘wet’ any surface where surface energy is higher than the surface tension of the fluid. Because of the very high surface energies of metals, fluids would be expected to spread or creep on any truly clean metal surface.

By modifying the surface of a metal or solid, in advance, with a stable, durable film of low surface energy, it is possible to retard the migration or creep of fluids on that surface. Wettability of surfaces can be controlled and protection can be obtained from very thin film coatings. This acts as a dam around the lubricated area to prevent oil migration and subsequent contamination of nearby, sensitive components and optics.

Additionally, the lubricant also has extremely low outgassing properties which prevents the lens from fogging up. These properties play an important role in aerospace applications where parts cannot be routinely serviced.

This isn’t the first time Nye products have been sent into space. NyeBar is also found in the mast camera of the Mars Curiosity Rover which launched in 2011. Nye Lubricants has several other products used on the James Webb Telescope, GOES-R Series and International Space Station.

“Nye has invested significant time and resources into expanding our research and development efforts in the aerospace industry,” said Mr Mock.

“Last year we launched our new Vacuum, Aerospace, Semiconductor Test Laboratory dedicated specifically to the formulation and validation of in-vacuum lubricants. We strive to innovate alongside our aerospace customers who are working on more complex projects,” said Dr Jason Galary, Director of Research, Development and Innovation at Nye Lubricants.

“Nye is honoured to have played a small part in this historic mission that will gather crucial information about conditions on Mars,” said Mr Mock.