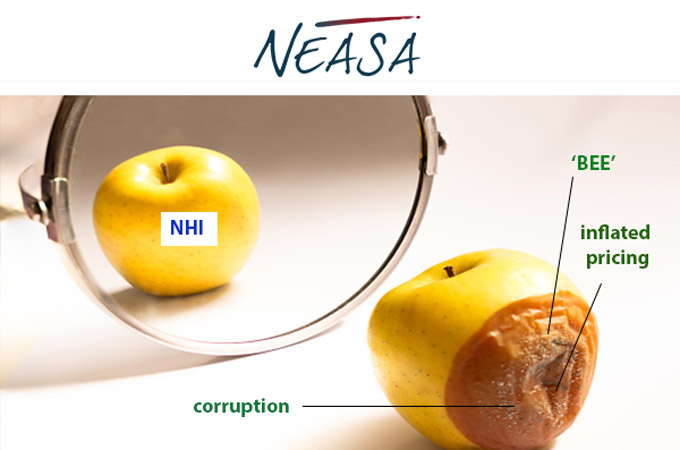 According to reports, a group led by the South African Institute of Chartered Accountants (SAICA), has calculated that South Africa has lost over R1.5 trillion to corruption between 2014 and 2019.

After looting and mismanaging each and every State-Owned Enterprise (SOE) into near obliteration, the looters are not deterred from setting their sights on South Africa’s private healthcare sector.

The ANC wants to achieve this by “bringing private healthcare providers under comprehensive state control, regulating medical schemes into bankruptcy, and leaving the country with a single ‘giant state-run medical aid’”.

We all know that, true to the nature of everything the ANC/SACP touches, this will be a complete and utter disaster.

If this is the case, why does the ANC/SACP want to continue with it? According to Anthea Jeffery, the motive lies in the advancement of their destructive socialist revolution, to grease the ANC’s patronage machine and to pursue the “blatant elite enrichment” (BEE) that state control over every single healthcare contract and service is sure to provide.

The following article by Anthea Jeffrey, which appeared in the Daily Friend on 24 June 2021, is a must-read.

> The National Health Insurance Bill of 2019 (the NHI Bill) is back before Parliament, for the National Assembly’s portfolio committee on health (the health committee) is busy hearing oral presentations from those who asked in their written submissions for the chance to address MPs directly.

The IRR made its presentation on Tuesday this week.

A state monopoly over healthcare

The NHI is aimed at nationalising the private healthcare sector and giving the state a monopoly over all healthcare in the country. This is to be achieved by bringing private providers under comprehensive state control, regulating all medical schemes into bankruptcy, and leaving the country (in the words of former health minister Dr Aaron Motsoaledi) with a single ‘giant state-run medical aid’: the NHI Fund.

According to the ANC, this single provider – which will be just as inefficient and corrupt as Eskom, Transnet, Prasa, SAA, the SABC and other failing SOEs – will then (magically) succeed in supplying ‘free’, comprehensive, and high-quality healthcare to the entire South African population, already some 60-million strong.

This fantasy can be sustained only by turning a blind eye to many inconvenient truths.

These include the following:

Why then is the ANC so determined to push ahead with the NHI? Its real reasons for wanting it lie clearly in ideology, the need to feed its patronage machine, and the personal desire of many cadres to benefit from the ‘blatant elite enrichment’ (‘BEE’ for short) that a centralised and state-controlled system will bring.

The ideological goal is clear. A key objective of the National Democratic Revolution (NDR) is to bring about a ‘socialised’ economy in which healthcare (along with many other vital services) no longer depends on voluntary exchange in a competitive market but is strictly controlled by the state, en route to a socialist and then communist nirvana.

The patronage goal is clear too and has several strands. New ‘NHI’ taxes are to be introduced in an attempt to siphon into state coffers the roughly R200bn a year that people now spend on medical scheme membership to secure the quality private healthcare of their choice.

However, this R200bn – assuming it can in fact be collected from a small and shrinking pool of taxpayers – will not be ring-fenced for NHI purposes unless a specific statute to this effect is enacted, which the Treasury opposes.

In the absence of such legislation, the additional R200bn, though ostensibly raised solely for the NHI, will be paid into the National Revenue Fund: in the same way that the proceeds of the plastic bag levy, the sugar tax, and the carbon tax already are. Once this ‘NHI’ revenue has been included in this common pot, it can easily be used to help pay the public sector wage bill, for instance, and so sustain the ANC’s deployed cadres.

The NHI will also require a plethora of new or expanded bureaucratic entities, beginning with the NHI Fund and its nine sub-units – and extending to many other structures. Hence, the NHI system will put many more jobs for pals within the gift of the ANC and its deployment committees.

However, it is in the centralised and state-controlled provision of all health services and products that the greatest scope for patronage – and blatant elite enrichment – will lie.

The best opportunities for black economic empowerment (BEE) in the procurement sphere will go to the cadres deployed to:

Particularly important is a provision in the NHI Bill requiring that all healthcare procurement comply with the Broad-Based Black Economic Empowerment Act of 2003, its accompanying codes of good practice, and the Preferential Procurement Policy Framework Act of 2000 (the 2000 Act).

The 2000 Act supposedly pegs BEE price inflation at a maximum of 10% on contracts worth R50m or more. In practice, however, preferential procurement has long opened the door to price inflation of a far greater magnitude.

As far back as 2012, Gwede Mantashe, then ANC secretary general, urged BEE companies to ‘stop using the state as their cash cow by providing poor quality goods at inflated prices’. He also criticised ‘this thing of having a bottle of water that you can get for R7 procured by the government for R27 because you want to create a middle-class person who must have a business’.

In 2018 the Treasury’s acting chief procurement officer, Willie Mathebula, provided further insight into the massive scope of the problem when he told the Zondo commission that ‘the government’s procurement system is deliberately not followed in at least 50% of all tenders’. Moreover, once the usual tendering rules had been suspended on some spurious basis, ‘a contract which started at R4m was soon sitting at R200m’, he said.

The price controls the NHI Fund will impose on all healthcare goods and services should, in theory, prevent price escalation of this kind. But the maximum prices set by the Treasury for the emergency procurement of personal protective equipment (PPEs) in 2020 did not in fact prevent a host of contracts being concluded at prices well above those levels, as outlined below.

Still more scope for corruption under the NHI

The more NHI controls proliferate, the more bureaucrats will be able to demand kickbacks for helping people to circumvent or benefit from them. Bribes will be solicited, for example, from healthcare suppliers seeking to bypass price controls – or wanting to be included on approved lists, selected as contractors, or receive payment for what they have already delivered.

(Bribes in return for payments due are already rife within the public service, as the Public Service Commission’s director general, Irene Mathenjwa, told a parliamentary committee in November 2019. Corruption of this kind, she says, lies ‘at the core’ of the problem of late payment by the state, for the attitude of many public servants is ‘if you don’t bribe me, I’m not going to pay’.)

NHI corruption will also be difficult to root out when corruption of various kinds is already hard-wired into the public healthcare sphere.

As President Cyril Ramaphosa has acknowledged, ‘citizens are [sometimes] forced to make payments to get access to medical treatment…for services that are meant to be free’. In addition, ‘state property in hospitals and clinics, including vehicles and equipment, is being stolen, hired out, or resold’.

The health supply chain is particularly vulnerable to corruption, the president says, ‘because of the large volume of goods and services transacted’. Abuses already evident include ‘fraudulent orders, tender irregularities, …bribery, and over-pricing’. In addition, as he (coyly) puts it, there has been ‘political interference in the tendering system’, along with ‘a lack of consequence management and an inadequate response from the criminal justice system’.

Mr Ramaphosa made those telling admissions at the October 2019 launch of the Health Sector Anti-Corruption Forum (the forum). The forum, he claimed, will bring stakeholders together and make it easier to ensure that ‘the NHI…pool of funds…is not wiped out through fraud and corruption’. But what the forum will do in practice to counter these evils has not been explained.

In launching the new entity, Mr Ramaphosa appealed to the public not to ‘pay bribes to get treatment’, not to ‘offer money for securing or keeping a job in a clinic’, and ‘not to buy equipment and medicines you know to be stolen’.

But such exhortations will clearly not suffice. Prosecution and punishment will also be needed – which is why the Hawks and the National Prosecuting Authority have been included in the forum. However, both these entities had their budgets slashed this year. They are overburdened and under-resourced and will for many years need to focus their limited capacities on the corruption cases expected to arise from the Zondo commission’s work.

PPE tenders and what they portend

When the Covid-19 pandemic began last year, the government faced an urgent need to secure adequate supplies of face masks, Hazmat suits, and other PPEs for health professionals in particular. But instead of doing their best to meet these important needs, many politicians, officials, and their relatives or associates embarked on a BEE tenderpreneurship binge.

When news of inflated prices and poor quality began to break, Mr Ramaphosa instructed the Special Investigating Unit (SIU) to probe irregularities in PPE contracts concluded between April and November 2020 at a cost of some R31bn.

Among the suspicious contracts (presumably) under investigation are the R125m PPE tender awarded by the Gauteng health department to the husband of presidential spokesperson Khusela Diko and the R3m reportedly raked in from the Free State administration by ANC secretary general Ace Magashule’s sons Thepiso and Thato.

In May 2021 the SIU reported that the value of the contracts it was investigating had risen to R14.2bn, almost half the total allocated to PPE procurement. According to SIU head Andy Mothibi, the unit is making significant progress in uncovering ‘the insatiable pursuit of self-enrichment’ that characterised many of the PPE contracts.

The PPE saga – and the likelihood of massive corruption in the centralised and state-controlled NHI system – put a different gloss on ANC propaganda in support of the NHI.

According to the ANC, the NHI will not only ‘benefit and uplift the poor’ but also ensure that the ‘young carry the old’, the ‘healthy carry the sick’, and the ‘wealthy carry the poor’. People are also being told that the only individuals opposed to the NHI Bill are those who want to ‘push aside other South Africans to make themselves benefit’.

This propaganda is rich indeed, coming as it does from a narrow group of SACP/ANC politicians who plan to use the NHI to advance a destructive socialist revolution, grease the ruling party’s patronage machine – and pursue the blatant elite enrichment that state control over every single healthcare contract and service is sure to provide.

Dr. Anthea Jeffery is the Head of Policy Research at the Institute of Race Relations (IRR).