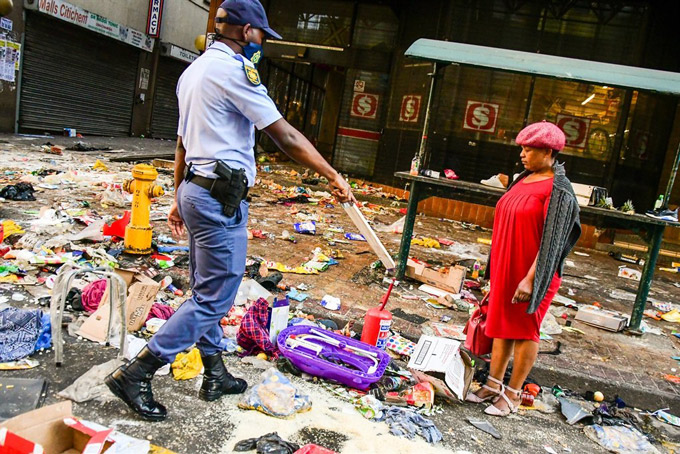 It has been a week since your predecessor, Jacob Zuma, was jailed for his contempt of the highest court in the land.

In the days following Zuma's incarceration, sporadic outbreaks of violence started in KwaZulu-Natal, notably with trucks being burned along the N3 highway.

Since those first sporadic outbreaks of violence, which the authorities couldn't quell, South Africa finds itself at the mercy of armed gangs of looters who are stealing our food, jobs and futures in real-time.

As we write this letter, our journalists in KwaZulu-Natal and Gauteng are being threatened by the looting mobs to have their faces "cut open" for reporting on this complete breakdown of law in order in our country.

#UnrestSA: Follow News24's live update for the latest on the riots rocking the country

Residents of the two provinces, many of them young children, are forced to act as security guards in protection of their businesses and homes, while very few of the deployed 2 500 soldiers are seen actively quelling the unabated looting.

At least two children, aged 14 and 15, have been shot dead in the riots.

The mayor of eThekwini estimates that the economy of Durban will lose R20 billion if the violence is not stopped immediately. This destruction has already catapulted a new generation into poverty.

Gauteng and KwaZulu-Natal, as well as other parts of the country, will see severe petrol and food shortages in a matter of days.

This will probably lead to another round of looting and panic buying, while trucking companies and food producers refuse to put their employees' lives and assets at risk.

It is now abundantly clear that this violence, that your government cannot seem to stop, was instigated by intelligence officials and other politicians or civil servants loyal to Zuma.

Human rights lawyers like Vusi Pikoli, Dumisa Ntsebeza and Howard Varney are pleading for you to announce a state of emergency to reclaim authority as head of state and commander-in-chief. These are unprecedented times.

Your security cluster ministers insist that the situation is not dire enough to warrant a state of emergency. This after more than 70 lives have been lost and billions of rands of property devastated and looted. This after critical infrastructure has been deliberately targeted. So we ask: what will it take to convince your Cabinet that this calamity requires extreme measures?

With all respect, Mr President, your words are no longer enough. No fancy speech or the "long game" you are renowned for will restore peace and stabiity while Zuma's children, sycophants, spies and loyalists are allowed to continue fanning the flames of violence on social media and mobilising desperate people to destroy our country.

No promises by the police or intelligence agency or National Prosecuting Authority that the culprits "will" be arrested are enough to stop the violence, the killings and resume the delivery of food to the people of South Africa.

This is the greatest test of your presidency and so far you have failed spectacularly to honour the oath you took to protect the law-abiding citizens of this country.

We implore you to allow community and religious leaders to join the likes of business organisations in standing up for the protection of their people and businesses against the violence of a few.

The country’s two most populous provinces - which are the country’s most important economic nodes - lie in ruins. No city or small town has been unaffected.

The already shaky economy, already pummelled by recession and Covid-19 - is beyond the brink.

There is no quick comeback here. It means starvation, joblessness and the end of life as any of us knew it. That’s not melodramatic.

It’s fact. Hope that government will take control has hightailed it out of this country.

ALSO READ | #UnrestSA: Should we be concerned about citizens taking matters into their own hands?

Investors won’t rebuild, knowing how little regard the government gave them. If this economy ever starts to recover, it will be through the sheer guts and determination of good citizens who want to rebuild.

No one thinks government will do anything sustainable to repair this. We know government is broke - national, provincial and municipal coffers looted. Where will the money come from?

Vaccination sites are closed. People waiting for their second vaccine fear they’ll never get it. Those who need medicine can’t access clinics or doctors, even the gravely ill. Informal traders, the people who eke out a living on the margins, have been as hard hit as the megastores. Food queues snake for kilometres from the entrances of malls that have not been trashed. Already. What’s the plan to get food to consumers?

People are scared, hiding in their homes, too afraid to venture out. The sounds of gunshots and explosions fill the air, which is choked with smoke for much of the time. Dystopian scenes play out around every corner.

The psyche of the country is profoundly disturbed. Where was the hand of comfort as the country burned and people’s livelihoods were destroyed? Was it too discomforting for your government to extend it?

Where was the regular communication with the media? When questions are being asked of police and other authorities, by a community in crisis, a stony silence is a slap in the face.

It’s evident that people are no longer listening to you when you speak. You’ve lost the respect of many who thought you could lead our country to a better place.

The community has again – after the ravages of Covid-19 - dug deep to show resilience and bravery. Where is yours and that of your Cabinet?

Mr President, when South Africa emerges from catastrophe, this will be a very different country. Many of our factories, warehouses and malls will be burned out shells. So will much of our critical infrastructure which we will need to rebuild. But the biggest scars will be in our hearts, souls and psyches.

This nation has suffered a lot of trauma in its young life, but none has been as brutal as what we have experienced in the last week.

We will be needing you to lead what is set to be a hard and prolonged period of healing. We must say, however, that your efforts and record in managing this gravest of crises gives us very little faith that you will be up to that task.

You don't have much time to reaffirm the supremacy of the law in all towns and cities of South Africa, but firm, urgent action can still save this country from disappearing into the abyss.