A fireman at Renault Group engineering 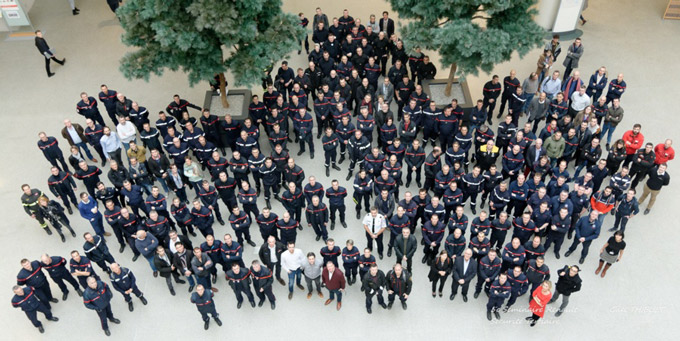 The unique collaboration between Renault Group and fire-fighter services started in 2010, with both parties committed to improving safety of all. Renault Group is the only car manufacturer to work hand in hand with road rescue teams to facilitate their work in the field. Christophe Lenglos is Lieutenant-Colonel in the Yvelines (France) Fire and Rescue Department. He has been assigned to the Vehicle Safety division at Renault Group Engineering customer performance department. He took time to tell us how his involvement with the Group has improved the response time of rescue teams in the field.

It’s not unusual to see fire-fighters at either the Renault Group technical centre in Lardy or the Technocentre in Guyancourt in full kit, ready to leap into action. There’s no emergency, they’re there for training drills. Since 2010, the automotive manufacturer and rescue services have developed a unique collaborative project to facilitate the work of fire-fighters when responding to an accident.

Following a violent accident involving major trauma, the ‘golden hour’ is the hour that follows the initial crash. Every minute counts. Our primary goal as a first responders is to save as much time as possible with each call-out.

A DUO WITH SO MUCH TO LEARN FROM EACH OTHER

Situation-based vehicle extraction exercises and training sessions are often held by teams from Renault Group Engineering and Tertiary Safety to give local fire and rescue squads real-life practice in dealing with post-crash scenarios involving new vehicles before their official release on the market. This approach is an essential step in validating the ‘Decision Support Sheets’ (DSS) the Euro NCAP* certification body has recently added to their list of requirements.

Information session on Arkana with Christophe Lenglos and the team from Yvelines Fire and Rescue Department
at the Montigny-Le-Bretonneux fire station.

"My role is primarily to work with engineering teams during the early stages of design to ensure they understand and incorporate what road rescuers need in their designs. It is also beneficial for fire fighters as it keeps up abreast of the technological advancements and constraints an automotive manufacturer must account for in vehicle design, thus enabling us to make emergency services more efficient and better adapted," outlines Christophe Lenglos.

The passive safety division in Lardy provides such opportunities thanks to its fleet of post-collision vehicles. Claire Petit-Boulanger, Tertiary Safety expert at Renault Group Engineering, says:

Renault Group gives fire-fighters the opportunity to use test car prototypes so they can practice on new generation vehicles. Hence, more than 500 of the Group’s most recent models are used every year to improve vehicle extrication and road rescue techniques.

For Christophe Lenglos, the sharing of best practices is crucial: "Thanks to our Collaboration with Renault Group, we know have up-to-date knowledge. Some of our training content is no longer relevant. The expertise of engineers is reassuring as we sometimes have misconceptions about certain perceived dangers that are far more manageable than we previously thought.“

Specific attention has been paid to electrified vehicles (hybrid, plug-in hybrid, and EV) that are now joining the ranks of the various brands. "Thanks to experience in electric vehicles that Renault Group has been acquiring over more than ten years and its work on battery chemistry, we have developed an informed approach to rescue operations that are well adapted to such vehicles." explains Christophe Lenglos.

INNOVATION THAT IMPROVE SAFTEY FOR ALL

Collaboration has been beneficial for everyone involved. For Renault Group, it has given rise to two innovative solutions that have both helped emergency services considerably reduce their response time.

First, the ‘Fireman access’ gives fire-fighters fast and direct access to a burning battery on either Renault or Dacia plug-in hybrid and EV models. The special access means we can get water into the heart of EV batteries to extinguish fires in just 5 minutes, instead of 1 to 3 hours. The patented innovation received the Renault Brothers GOLD Trophy from Luca de Meo on July 1st.

Second innovation, the ‘QR Code’. The QR code sticker is placed on windscreens and is then scanned by emergency services, giving them all the technical specs they need for their rescue operations. The information is compiled and included on the DSS rescue sheet. When rescue teams arrive at an accident site, the easily recognisable QR code can be rapidly scanned to determine if the vehicle is an EV, HEV, or PHEV model.

Thanks to the QR code, emergency services receive information on the car’s architecture (in particular, battery and air bag locations, ideal spots that are quick and safe to cut through, etc.). Such information is of precious help on the scene of an accident as it helps improve response times. For example, it can help save 15 minutes when extracting someone from a crashed vehicle! These precious minutes can sometimes help save a life!

Training session of extrication and validation of a decision support form.

Originally devised by Renault Group, the rescue sheets initiative has also helped changed road safety in general, as they are now required by Euro NCAP in allocating its star ratings.

The QR codes will appear on all Renault Group vehicles in Europe as of 2022.

SHARING EXPERIENCE, EXERCISES, AND TRAINING IN FRANCE AND AROUND THE WORLD

Renault Group understands how important this expertise can be and has therefore decided to extend their work with fire and rescue services wherever necessary. Fire-fighters in France and abroad (Italy, Portugal, Switzerland, Slovenia, Croatia, Finland, Canada, Colombia, etc.) are increasingly interested in training sessions that hone their skill sets and provide valuable insight into major changes in the world of automotives.

Training day with firemen in Italy

Always seeking greater efficiency in providing such training, the Group’s Engineering division capitalizes on high-tech digital simulation and virtual reality tools. The aim is to give fire-fighters the opportunity to train on new-generation vehicles with immersive VR simulations that accurately reproduce structural deformations that occur during accidents. This approach perfectly goes hand in hand with practice on real vehicles. Once again, every minute counts!

* Euro NCAP: The European New Car Assessment Program is an independent international organization created in 1997. Its main mission is to carry out impact tests to assess the passive and active safety of vehicles. The safest vehicles on the market receive a maximum rating of 5 stars.

A BIT OF HISTORY…

Renault Group and road safety is a story that began more than 60 years ago, when one of the company’s doctors, Dr. Claude Tarrière, set up the accidentology and biomechanics laboratory.

Over the decades, while the brand's vehicles have become progressively safer for those on board, they have become increasingly complex, especially for emergency services. In 2010, driven by its commitment to improve safety, Renault Group – through its Corporate Social responsibility Department – decided to work closer with road rescue services in developing ways to better save lives. The notion of tertiary safety, an area focused on making road rescue operations safer, faster, and more efficient, took on full meaning within the group. It is the next logical step after primary safety (all systems that help prevent accidents or reduce their consequences) and secondary safety (everything that protects passengers during an accident).

Modern cars are rapidly changing, therefore rescue operations need to adapt in order to keep up. When the first electric vehicles hit the market, Renault Group stepped up collaborative efforts with the fire and rescue services. In turn, rescue services came to see Renault Group as not just a car manufacturer, but also a major ally.

2018 was a major milestone in their shared journey. Christophe Lenglos, a ranking officer from the Yvelines Fire and Rescue Department, was assigned to the Renault Group R&D Technocentre. Since then, Lieutenant-Colonel Lenglos has worked alongside Claire Petit-Boulanger, Tertiary Safety Expert who started out at the CSR division (Corporate Social Responsibility). Since early 2021, the pair has been working with the vehicle safety teams at Engineering.

"Our partnership serves three main purposes. First, we work with the people in Engineering and vehicle development daily to ensure they are aware of the constraints and needs of emergency services.

We also take the knowledge that we have acquired within Renault Group and share it with first responders in France and abroad through fire-fighter training sessions.

Lastly, we promote Renault Group’s involvement with emergency workers before the French Ministry of the Interior (DGSCGC) and international organizations (such as World Rescue Organization, International Emergency Firefighters), so that emergency services will have the best possible support when dealing with new vehicles in the future."

THE SPECIFIC CONSTRAINTS OF ELECTRIC AND HYBRID VEHICLES

Electrified vehicles pose an additional challenge that fire and rescue teams must account for when drafting operational procedures: ensuring the electrical safety of a hybrid, plug-in hybrid, or EV model.

For ICE vehicles, the usual step involves securing the regular 12V/14V battery. With electric or hybrid vehicles, given that impact speeds are often above those tested by Euro NCAP protocols, the high-voltage battery (400 volts) and its power cables must be made safe. This operation must be done as safely as possible without slowing down efforts to rescue people inside the vehicle.

For high-voltage batteries, a wide range of various manual safety mechanisms can be found in different locations depending on the manufacturer: boot, engine block, under a seat, etc. These rescue sheets are of paramount importance for fire-fighters.

As part of Renault Group's ongoing work with emergency services, the Renault and Dacia vehicle design teams have ensured that all cables built into the car’s body are not located in areas that are ideal for emergency services to cut through when extracting passengers.

Much like circuit breakers in household electrical circuitry, Renault Group EV models are also equipped with a ‘breaker’ to easily stop all electricity flowing through the vehicle. A prime example of making the breaker switch as easily accessible as possible is how it has been placed in the front passenger footwell on Renault ZOE models.