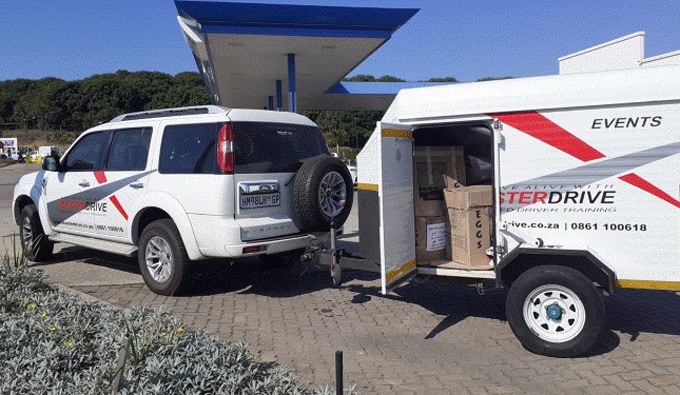 Mandela Day was right after unrest wreaked havoc in South Africa. Making a difference in honour of Nelson Mandela was even more important this year. MasterDrive made their contribution by delivering essential goods to KwaZulu Natal and encourages others to contribute to South Africa’s recovery as well.

The CEO of MasterDrive, Eugene Herbert, says a team of employees set off to deliver much needed essential goods last weekend. “The journey was successful with both employees at our KwaZulu Natal branch and other homes receiving much needed assistance. The team passed through some of the worst hit areas along the way with little to no signs of unrest. Remnants of the previous days were seen at various points where the tarmac was burnt when trucks were set alight and debris littered roadsides.

“It was positive to see additional police presence at areas such as tollgates. The first police roadblock was

encountered in Harrismith where the necessary checks were done to ensure that everything was legally purchased and transported.”

It was also heartening to see communities working together. “Community groups and private security companies could be seen at various points screening those who wanted to come into the area. This was seen right from the north coast down to the south coast. Rationing at fuel stations and shops at that point, however, indicates the difficulty individuals in those areas have yet to face.”

Even though Mandela Day has passed, join MasterDrive in their efforts. “MasterDrive has always believed that Mandela Day initiatives should not be limited to July only. This can be seen in their philanthropic project which celebrates its first year this month as well.

“In this light, we encourage each person to contribute whatever they can to affected communities to help South Africa get back on its feet. The spirit of Ubuntu is one that remains strong in South Africa and now more than ever we need to unite to help those in need,” says Herbert.