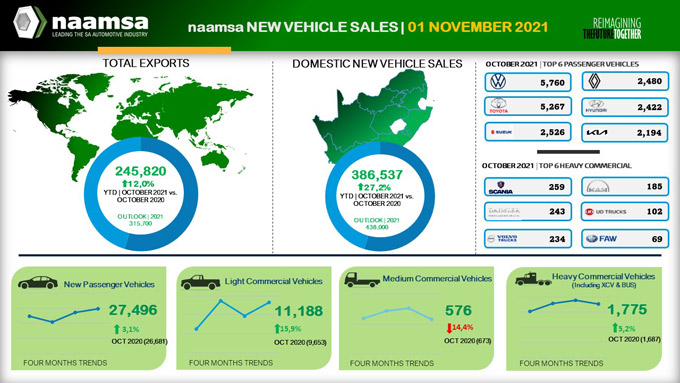 In releasing its October 2021 new vehicle sales, naamsa | The Automotive Business Council said that adverse events that occurred during the month of October, including the three-week strike in the steel and engineering sector as well as the return of an acute load-shedding programme, impacted the new vehicle market and vehicle exports. Aggregate domestic new vehicle sales in October 2021, at 41,035 units, reflected an increase of 2,341 units, or 6,1%, from the 38,694 vehicles sold in October last year. Export sales recorded a decline of 10,159 units, or 30,0%, to 23,685 units last month compared to the 33,844 vehicles exported in October 2020.

Sales for medium and heavy truck segments of the industry reflected a mixed performance and at 576 units and 1,775 units, respectively, showed a decline of 97 units, or 14,4% in the case of medium commercial vehicles, and, in the case of heavy trucks and buses an increase of 88 vehicles, or a gain of 5,2%, compared to the corresponding month last year.

The sigh of relief with the country’s move to adjusted alert level 1 from 1 October 2021 was short-lived due to the adverse events that occurred during the month, including the three-week strike in the steel and engineering sector as well as businesses having to endure several days of rolling blackouts during the month ahead of the local government elections. In addition to COVID-19 supply chain disruptions resulting in vessel and container shortages consequently resulting in higher logistics costs, loadshedding remained an area of great concern impacting on the ability of the industry to plan and grow.

On the positive side, respondents to the Absa Purchasing Managers’ Index [PMI] remained upbeat about an improvement in business conditions over the next six months.

Vehicle exports continued their four-month downward trajectory during the month which could be linked to the three-week strike in the steel and engineering sector impacting on vehicle production as well as new model introductions normally taking time to ramp up to full production. On the upside, the domestic automotive industry will continue to benefit from the strong rebound in global economic activity and the favourable conditions abroad.

naamsa also confirmed that Neale HILL who was recently appointed President of Ford Motor Company Africa, from October 01 this year was elected unopposed as the new naamsa President for a two year term. HILL who serves on the boards of Ford Motor Company of Southern Africa, and Ford Financial Services South Africa said he was humbled by the vote of confidence by all other automotive company CEO’s in electing him to the position of naamsa President. “naamsa is increasingly playing an indispensable transformative role that contributes directly to the sustainable development of the country’s productive economy. I am very pleased to lead our country’s automotive industry in this capacity as we accelerate our role as a major industrial and economic force that adds real value every day, by providing mobility; facilitating trade; creating sustainable jobs; moving people, goods and services; and by serving communities and creating prosperity for the people of South Africa”, said Mr. HILL.