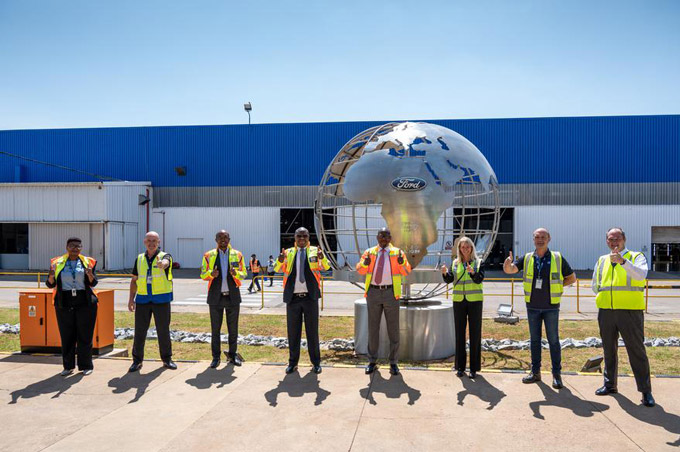 In the lead up to the 2022 launch of the Next-Generation Ford Ranger, Ford South Africa this week hosted a high-level delegation for an oversight visit at its Silverton Assembly Plant and the adjacent Tshwane Automotive Special Economic Zone (TASEZ).

This followed the announcement in February this year of Ford Motor Company’s US$1.05 Billion (R15.8 Billion) investment in its Silverton plant and supplier facilities to modernize its local operations, and expand installed production capacity to 200 000 vehicles per annum.

“It is my honour to join you here today at our Silverton Assembly Plant, a location that truly flies the Ford flag high,” Dianne Craig said. “In February, Andrea Cavallaro announced our US$1.05 Billion investment in South Africa alongside President Cyril Ramaphosa, and it is amazing to have witnessed exactly where and how the investment has been utilized.

“Silverton is one of five Ford facilities around the world that assemble our segment-defining Ranger pick-up, along with two plants in Thailand, and one each in Argentina and the United States. Ranger is truly a global product, brought to customers around the world who love and rely on their Ranger for family, work and play,” Craig said.

“On 24 November 2021, we will reveal the Next-Generation Ranger, which is scheduled to start build next year right here at our Silverton plant. It will be sold in South Africa and exported to over 100 global markets, including the entire African continent,” Craig said. “So this investment is a big deal for Ford Motor Company, as it is for South Africa, as we work towards delivering a world-class product with the highest levels of quality for our customers.

“We truly appreciate and value our partnership with national, provincial and local government which helped make this investment possible. It is impacting communities with 1 200 incremental new jobs at Ford, and an additional 10 000 jobs in the total value chain. So it is changing lives for South Africans, not just in the years ahead, but for decades to come,” Craig added.

The transformation of the Silverton Assembly Plant is already at an advanced stage, with the entire assembly line having already been upgraded and modernized, introducing Ford’s latest technologies and best practices from around the world.

Ford is also building its first on-site Stamping Plant and an all-new Body Shop at the Silverton plant, with the majority of the equipment already installed and being readied for the initial tooling trials early next year. A vast 100 000m2 Ford-owned Frame Line is under construction in the Tshwane Automotive SEZ. The e-coat section of the facility is near completion, with work about to commence on installing the two fully automated robotic assembly lines.

“It is amazing to see how much has been achieved within the Ford Silverton Assembly Plant and the Tshwane Automotive SEZ in such a short period,” Andrea Cavallaro said. “Ockert Berry and his team at Ford South Africa have totally transformed the Silverton plant, and it’s unrecognizable from just six months ago. Modernizing this plant is a crucial step in ensuring that it is comparable with the best Ford plants in the world, and will deliver the highest levels of quality, and at the required volumes to meet the significant demand from around the world.

“I would also like to commend Simphiwe Hamilton and his TASEZ team, who have pulled out all the stops to deliver on the targets, despite the immense challenges posed by COVID-19,” Cavallaro said. “In February last year the TASEZ site was an open field, and now we have two suppliers already manufacturing parts and delivering them directly to the Silverton assembly line, with several others soon to follow.

“It really tugs at the heartstrings, not only to see how we have transformed this place, but also what has been done for the people of South Africa to create jobs, and create a future for them,” Cavallaro added.

Deputy Minister of the DTIC, Fikile Majola, commented: “Ford’s decision to invest in South Africa and in this plant is very important for us, as it supports thousands of jobs in the local communities. Our partnership with Ford in the Tshwane Automotive SEZ is one of our great success stories, as it serves as an example of what government working with the private sector can do.

“Partnerships like this will play an important role in helping drive the African Continental Free Trade Area agenda which President Ramaphosa has prioritized to integrate and develop the African continent,” Majola said. “It is amazing to see construction and production happening at the same time at the Ford plant and in the TASEZ, and I congratulate the team on all the work done thus far. It is now up to government to meet Ford’s deadline when they reach full production to be able to move the vehicles efficiently to the ports via the rail corridors so that we can export these vehicles around the world.”

Gauteng Premier David Makhura echoed the positive sentiment: “Ford’s US1.05 Billion investment was great news when it was announced in February this year, and it’s still the best South African investment story in one day from a single company. We’re grateful for the investment and Ford’s confidence in the country, and we are working closely with all our partners to reciprocate by doing everything we can to make this project a success.

“When we came here in February there was a great deal of excitement, even though we only saw foundations on the TASEZ site,” Makhura added. “But what we saw was great optimism, and its amazing to witness the significant progress that has been made over the past nine months. Aside from the buildings and construction, it’s the job creation that has the biggest impact, and it has been amazing talking to some of the people today who have started their first jobs here at Ford or with the supplier companies due to this project.

“We are looking forward to a long and successful journey with Ford, and we hope the success of the first phase of the TASEZ will lead to further opportunities in the future,” Makhura said.

The global reveal of the Next-Generation Ranger will take place on 24 November 2021. Click here for more information: https://www.ford.co.za/showroom/future-vehicle/next-gen-ranger.html