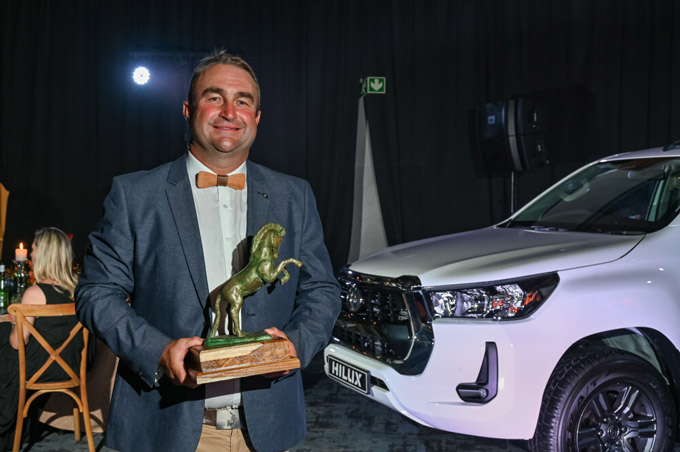 Here is to the men and women who ensure that food insecurity is not an issue in our country – at least at national level. At an event hosted by Toyota South Africa Motors (TSAM), alongside AgriSA, the local farming community was celebrated for ensuring that there is always food in our supermarkets as well as in most homes.

Toyota Young Farmer of the Year Gerhard Bruwer and New Harvest of Year winner Beverley Joseph each drove away in a brand-new Hilux bakkie after winning their respective competitions. Prior to the gala event in Kempton Park, Johannesburg, where the two winners were announced on 18 November 2021, finalists were nominated by their respective Agri-SA provincial councils before they went through a series of grueling rounds of elimination.

These candidates were tested on a multitude of aspects, including their financial and business acumen, farming skills and proficiency in management focusing specifically on their own contribution, independence as well as decision-making authority. The grand prize for Toyota/AgriSA Young Farmer of the Year and New Harvest of the Year is a Hilux workhorse.

Senior Vice President of Sales and Marketing at TSA, Leon Theron says: “ As Toyota, and possibly on behalf of all South Africans, we’d like to thank the farmers for standing strong in the middle of the COVID-19 storm. Our partnership with the farming community has been the backbone of Toyota sales in the LCV segment and we also thank them for making Hilux not just SA’s favourite bakkie – but SA’s most popular vehicle.”

Gerhard Bruwer of Douglas in the Northern Cape – who farms with maize, wheat, barley, sunflowers, potatoes, lucerne, pecans, beef cattle, peanuts, onions and grapes – had to outscore eight other finalists before claiming the top prize. They included Alexander Gibson of Ceres, Duncan Currie of Cathcart, Josè Goncalves of Boksburg, Wernich Lemmer of Hartbeesfontein, Doug Osler of Fouriesburg, Brad O'Neill of Richmond, Leon Lötter of Burgersfort and Kirch Müller of Middelburg.

“I’ve got a great support system and I just want to thank all my workers on the farm… I also want to thank Toyota South Africa for backing farmers, as well as organised Agriculture for creating operating spaces and platforms for us,” says Bruwer.

Beverley Joseph, who produces hops and proteas in George, had an equally tough competition in the New Harvest category. Other formidable finalists included Alfreda Mars of Moorreesburg, Israel Motlhabane of Wesselsbron, Mzewakhe Mthimkulu of Senekal and Phenias Gumede of Jozini.

Joseph says: “This trophy is dedicated to all the women in Agriculture. It’s not an easy environment and you must have hair on your teeth. Someone once told me that when opportunity knocks on your door, you must be ready to open the door and welcome it in. I want to encourage every woman to prepare themselves for those opportunities…”

President of AgriSA Jaco Minnaar says his organisation is proud Bruwer and Joseph. “All the participants are young farmers whom we can be proud of and I call on them to make themselves available in future to serve as leaders in organised agriculture and in their communities,” concluded Minnaar.