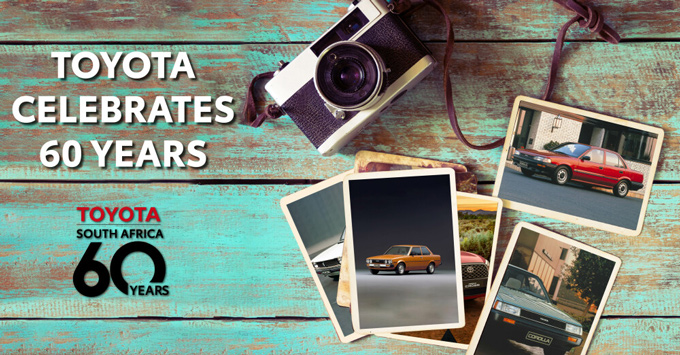 Toyota South Africa Motors (TSAM) has just released a new television commercial (TVC) which commemorates the company’s 60-year anniversary in the country. Since its establishment in 1961, TSAM has become as much a part of local culture as the vibrant South Africans that drive its vehicles. With this in mind, TSAM has shaped its culture around positive contribution to the country we all love.

In fact, the story of Toyota in SA is intricately intertwined with the lives of many people, across the demographic divides of our society. It is also no cliché that almost every South African has a Toyota story to tell. These include millions of individuals who travel by taxis (Toyota has 96% market share) to and from work, farming communities, people in mining as well as the construction industry – who have made Hilux their workhorse of choice.

Then there’s Corolla, which is no doubt one of the country’s most popular family vehicles – spanning some five decades in production. The recent introduction of Corolla Cross is likely to have the historic nameplate continue to live in the hearts of many enthusiasts. TSAM’s latest TVC, which celebrates 60 years of Toyota in SA, is a tribute to the brand’s loyal customer base as well as reaffirmation of the company’s commitment to the people of South Africa. The commercial features a number of significant Toyota milestones, Corporate Social Responsibility (CSR) initiatives, motorsport, environmental as well as other community outreach programmes.

According to Vice President of Marketing at TSAM, Glenn Crompton: “Our approach to sustainable development is aligned to the Toyota Global CSR policy and guiding principles. We realise that we can play a positive role in the societies and environment in which we operate through contributing to the economic and social development, as well as working in harmony with nature.”

TSAM’s latest investment was in the form of the R2.6 billion allocated to the introduction of the Toyota Corolla Cross, which was launched earlier this month. The introduction of the Corolla Cross model has generated a total of 575 new jobs at the TSAM plant while over 1200 direct jobs were created in the component supply base. In addition, Toyota continues invest generously in the development of sport, arts and culture through a number of sponsorships in these disciplines.

Crompton explains that: “As a corporate citizen, giving back to communities – whether through billions of investment in the South African economy or our CSR initiatives – has become second to nature in the six decades that Toyota has operated in SA. We could not have communicated it any better than in our new TVC. It’s both emotive and powerful, and it resonates well with the diverse demographics of our country.”

The TVC was produced by FCB Joburg – a subsidiary of Nahana Communications Group. “Toyota has done so much in South Africa over the years and is such a huge part of the culture and the economy, but it has never been the kind of brand that brags about its own achievements,” says Brett Morris, CEO of Nahana Group of Companies.

“So, in true Toyota style we wanted to find a way to pay tribute to 60 years of Toyota in South Africa by honouring the amazing people of South Africa. Toyota does indeed move the country in so many ways but is also moved by Mzansi's people, who really are such a big part of the Toyota brand,” concludes Morris.