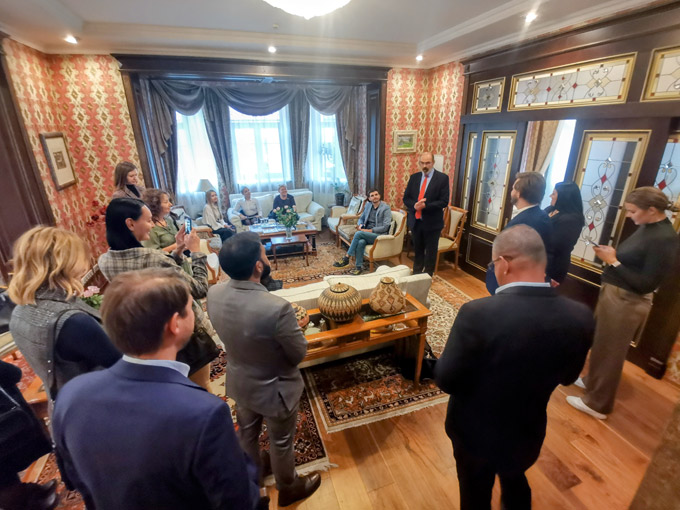 While South Africa was adjusting its Coronavirus risk strategy to Level One, three bold Cape Town tourism partners took matters into their own hands, and travelled to the Ukraine where they focussed firmly on forcing a tourism recovery that would support their businesses, and that of the wider Cape Town and South African tourism sector.

The delegation’s destination activation was held over three days in Kyiv, Ukraine and included the promotion of South Africa and Cape Town to a variety of travel and trade role-players, where they actively promoted the Mother City and South Africa in a concerted effort to support their business strategies, to achieve growth from a new tactical market with an untapped base and major appetite for South Africa.

Their visit was endorsed by the South African Ambassador to the Ukraine. Ambassador André Groenewald gave his Missions' full support in possibly expanding the opportunities of tourism and trade between the two countries. “The Embassy’s participation forms part of the Ministry of Tourism’s Global Advocacy Programme to re-activate the tourism industry in South Africa. Ukraine and Eastern Europe are attractive and under-utilised source markets that could contribute to the revival of the tourism market in South Africa," explained the Ambassador.

Leader of the delegation, Aquila Collection's marketing manager, Johan van Schalkwyk, explained: ”While we at Aquila Collection, saw substantial support from Russia over the past three months, our data indicated a notable increase in enquiries, and visitation from Ukraine to our Cape Town Big 5 safari properties, and therefore it was decided to 'strike while the iron is hot' and plan an in-destination activation, using Kyiv as the hub, to ensure Cape Town – and our tourism businesses – are top of mind for travellers in the immediate post traumatic period of the pandemic''.

A member of the delegation, Heidi Wahl, First Diamond in the Cape Town CBD, stated: “Ukrainian families and visitors were frequenting our studio and supporting the recovery effort over the last three months, and we were excited to partner and collaborate to infiltrate a new and inspiring market”.

The Cape Town office of Turkish Airlines joined the initiative to support this possible economic recovery to South Africa and Cape Town's tourism sector. Trevor Brown, sales and marketing manager, expressed his excitement in participating in this initiative, which would hopefully help unlock a potential new market; “As our route between Kyiv and Istanbul is the second most supported globally, and the connection to Cape Town is easy and hassle free, it makes perfect sense to bolster this easily accessible exotic destination for Ukrainians”.

Brown further noted that the Turkish Airlines', with connection out of Kyiv, Lviv and Odessa, both in and outbound, allow for an enjoyable overnight flight, with arrival in time for a comfortable check in either in Ukraine or South Africa.

According to van Schalkwyk, the tourism market is "ripe and ready" to experience South Africa. "The South African borders are wide open and ready to receive global visitors with only a negative PCR test prior arrival requirement," he said before adding, “while there may be some minor visa regulation currently prohibiting exponential growth from Ukraine, Ambassador Groenewald committed to working with the Cape Town delegation to help improve the relations between the countries and to improve travel between Kyiv and Cape Town. He said that their engagements in Ukraine “most certainly proved a tangible appetite for travel to Cape Town”.

While various meetings, facilitated by Ambassador Groenewald, took place over a number of days, including a formal introduction to Ukrainian Tourism official at the Kyiv Administration, the delegation had a prime opportunity to present Cape Town (and South Africa) to 50 preselected travel professionals at a breakfast networking session hosted at the magnificent BEEF Meat and Wine Restaurant in Kyiv. "These travel and trade invitees have all shown a keen interest in Cape Town and are ready to work with the partners to unleash the wonder of South Africa to their customers", remarked van Schalkwyk.

Ambassador Groenewald contributed to the success of the visit by participating in a few of the engagements, such as the Kyiv City Administration and the breakfast meeting with a number of tourism agencies and operators.

In conclusion van Schalwyk expressed his enthusiasm in the collaboration between the South African tourism sector and that of the Ukraine. “We came home extremely excited by the work done over in the Ukraine. Follow-up engagements have already been initiated back in Cape Town and I believe that this trip will have a positive effect in resurrecting the tourism economy of not only our business but also that of Cape Town and the rest of South Africa.