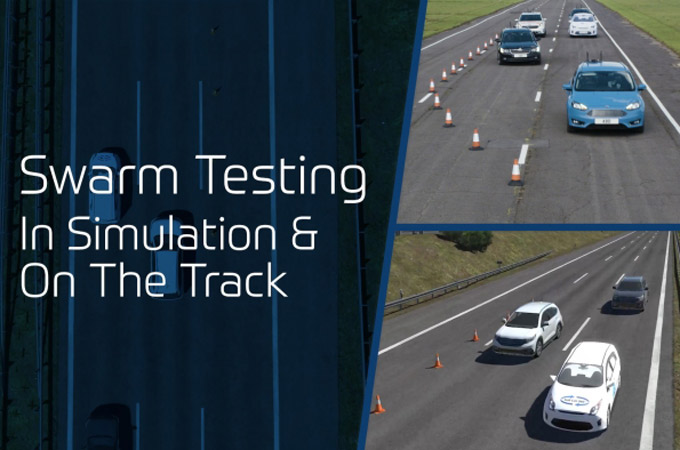 Leading automotive test system supplier AB Dynamics has showcased its unique capability to replicate simulated swarm tests quickly and accurately in the real world and vice-versa. By using a common toolchain, complex scenario testing can be transferred from one environment to the other with centimetre accuracy. This enables the testing and development of ADAS and autonomous systems to be significantly accelerated whilst also reducing risk and cost.

As the industry continues to move towards autonomous technology the complexity of testing is increasing. AB Dynamics recently conducted a track test with VW Group where eight objects were coordinated in a swarm test using the company’s vehicle control robots and wireless telemetry system.

“We are the only company to use the same software toolchain for simulated and real world testing; this means we can develop and run a test in the virtual world and simply ‘copy and paste’ it when at the test track,” said Jeremy Ash, Sales Director at AB Dynamics. “Swarm testing is very complex and can involve the precise choreography of eight or more test items. Our solution enables customers to run thousands of iterations of tests virtually and then confidently replicate a sample of these in the real world for correlation.”

Scenario testing using a swarm of vehicles is a vital aspect of development for ADAS and autonomous vehicle technologies. It assesses the ability of autonomous functions to interpret the behaviour and intentions of drivers and vehicles in the close vicinity. Scenarios such as merge-in, caused by lane closures on dual-carriageways, cut-in and cut-out are common events that force a vehicle using ADAS or autonomous systems to make a decision (brake, merge, accelerate or perform an evasive manoeuvre).

“Thousands of tests are required to establish an autonomous vehicle’s ability to safely navigate such scenarios,” continues Ash. “The use of a single toolchain enables the bulk of these tests to be conducted in simulation – reducing test track costs and the reliance on engineer time. Using the same software that controlled the simulated world, test parameters are essentially lifted to conduct the same tests on track. This correlation provides the necessary confidence to accelerate simulated testing and bring next-generation technology and functionality to market more efficiently.”

AB Dynamics is unique in being able to offer this capability with a single toolchain ensuring absolute test repeatability. It has produced a video to explain the complexities of swarm testing and demonstrate its capabilities in this area.