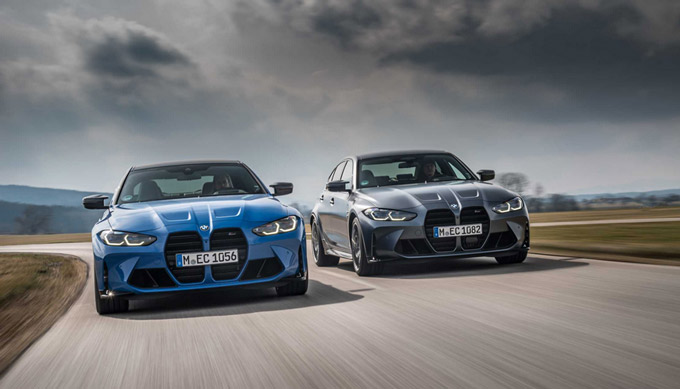 The power from the 375kW straight-six engine fitted in the new models is directed via an eight-speed M Steptronic transmission with Drivelogic. The M-specific all-wheel-drive system then divides it between the front and rear wheels as required to enhance agility, directional stability, traction and track-focused dynamics at all times. This allows the driver to experience an intoxicating interpretation of the hallmark M performance characteristics reflected, among other things, in even quicker acceleration.

The M xDrive system’s specially tuned power transmission control already provides a smile-inducing alternative to classical rear-wheel drive for a host of high-performance models from BMW M GmbH. Teaming up with the all-wheel-drive system is the Active M Differential, which also ensures fully variable distribution of drive torque between the rear wheels as the situation demands. This helps to transfer the drive torque to the road without any loss of power, especially when the car is being pushed hard or has less grip on one side. The M xDrive system and the Active M Differential – complete with its integrated M-specific traction control – link up with the Dynamic Stability Control (DSC) system to ensure precisely judged interaction for the driving situation at hand. The clear aim here is to produce a supremely dynamic driving experience blending the customary M feeling with noticeably enhanced traction and directional stability.

The M xDrive system uses an electronically controlled multi-plate clutch in the transfer case for smoothly adjustable, fully variable distribution of drive torque between the front and rear wheels. The multi-plate clutch’s oil supply has been optimised to keep the variable power splitting mechanism performing effectively even under hard driving on the track. The task of transmitting power to the front and rear differentials is handled by driveshafts engineered specifically for the BMW M3 Competition Sedan with M xDrive and BMW M4 Competition Coupé with M xDrive. The output shafts that relay the drive torque to the wheels are likewise bespoke items. The all-wheel-drive system has a rear-biased setup in classic M style. Normally, the drive power is channelled entirely rearwards, with the front wheels only being brought into play when the rears cannot feed any more power to the road.

The transfer case features a bespoke control unit and integrated wheel slip limitation. This enables it to compensate for any differences in rotational speed between the front and rear wheels exceptionally quickly without having to involve the central DSC management. This results in enhanced all-wheel-drive performance whose principal effect is to further intensify the sense of unshakable poise for which M models are renowned in highly dynamic driving situations, such as powering through corners in a controlled drift.

The improvements in traction, handling stability, agility and dynamism brought about by the combination of M xDrive and Active M Differential also translate into superior sprinting ability. The BMW M3 Competition Sedan with M xDrive and BMW M4 Competition Coupé with M xDrive both need just 3.5 seconds to reach the 100 km/h mark from standstill, making them 0.4 seconds quicker here than their rear-wheel-drive equivalents.

The dynamic transmission of power to the road in the BMW M3 Competition Sedan with M xDrive and BMW M4 Competition Coupé with M xDrive takes place via standard M light-alloy wheels measuring 19 inches in diameter at the front axle and 20 inches at the rear. The forged wheels in twin-spoke design with a Jet Black finish are fitted with tyres measuring 275/35 R19 at the front and 285/30 R20 at the rear. Specially designed track tyres with the same dimensions are also available as an option.

The all-wheel-drive technology in the new BMW M3 Competition Sedan with M xDrive and BMW M4 Competition Coupé with M xDrive is complemented by a double-joint spring strut front axle redesigned for these models and featuring specially adapted front axle geometry and an individually tuned steering ratio. These extensive bespoke modifications for the all-wheel-drive system ensure that both the existing pure rear-wheel-drive variants and their new M xDrive siblings stand out with their engineered-without-compromise, signature M steering characteristics. The all-wheel-drive models additionally benefit from a specially adapted version of the engine oil supply system designed to handle extremely dynamic performance.

M xDrive also allows the driver to tailor the all-wheel-drive system’s characteristics and performance to the driving situation and their individual preferences. The desired setting can be selected directly from the Setup menu of the M-specific operating system, where there is a choice of three different power transmission modes. In the default 4WD setting, the all-wheel-drive system offers maximum traction and precisely controllable handling while maintaining a distinctly rear-biased power split at all times. Activating 4WD Sport mode directs an even greater proportion of the engine’s torque to the rear wheels, even in extremely dynamic driving situations, resulting in sharper agility. The linear build-up of lateral forces so characteristic of M models now also makes it possible to execute controlled drifts. Drivers can also switch off the DSC system altogether and engage 2WD mode, where drive power is relayed solely to the rear wheels. If the optional M Traction Control is fitted, traction can be finely adjusted through ten stages in this setting in the same way as on the rear-wheel-drive models. This form of power transmission without any intervention from the chassis control systems to stabilise the vehicle allows seasoned drivers to enjoy a driving experience of remarkable purity and hone their skills with the help of the optional M Drift Analyser.

Drivers can set and store their preferred M xDrive mode as part of the two individual M1 and M2 configurations, together with the settings for engine characteristics, damper response, steering characteristics, braking system and other parameters. Either configuration can then be called up instantly at any time by pressing one of the two M buttons on the steering wheel.

Individual M feeling: four models each with their own character.

This duo is now joined by the newly arrived BMW M3 Competition Sedan with M xDrive and BMW M4 Competition Coupé with M xDrive. This means the latest model generation, in South Africa, will span four vehicles with distinct characters, each providing their own individual recipe for a sublime high-performance sports car offering unrestricted everyday usability. And customers will soon find even greater scope for matching M’s distinctive approach to high-performance driving with their personal style when the new edition of the BMW M4 Convertible joins the model range later this year.