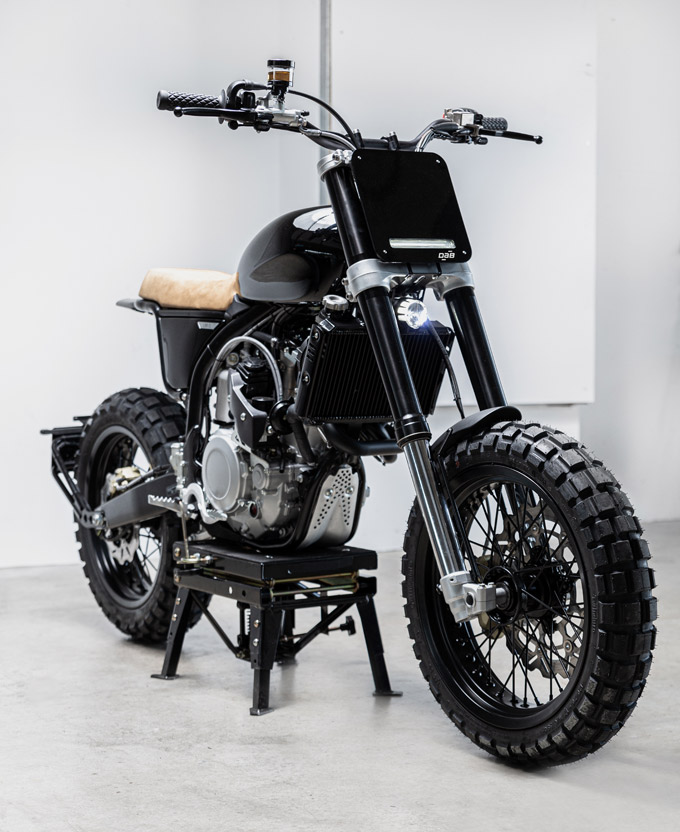 This project culminates months of work developing a new product identity for DAB Motors and marks an exciting step in the company’s evolution - the entry into the world of electric. The manufacturer of daring motorcycles, with the help of industrial design agency Outercraft, has realised an electric concept with a clean and minimalist design style that will inform its successive models.

The CONCEPT-E is at odds with the regular world of motorcycles with its exceptional use of materials. In pursuit of excellence, DAB Motors has incorporated: carbon fibre; ‘Öhlins’ suspensions designed specifically for the project; ‘Beringer’ solid aluminium brakes; and a Gates belt drive, running on aluminium machined pulleys, to maximize power and minimize noise. For unique upholstery, the CONCEPT-E saddle is made from Ripstop, a resistant textile usually used for yacht sails and technical clothing.

A high-tech mobility tool, the CONCEPT-E is DAB Motors’s first electric motorcycle and begins the manufacturer's transition to electric models.

Equipped with a 10kW motor and 51.8V Li-ion battery, the CONCEPT-E is the legal equivalent to a 125cc, easily driven after a few hours of training. The beauty of the CONCEPT-E electric machine is its driving comfort and intuitive use, combined with its powerful instant torque which propels you through the streets, almost silently.

The CONCEPT-E is designed as an object, not just a traditional motorcycle:

“Creating an electric model allows freedom from the usual motorcycle design codes. Integration constraints which differ to those on a gas motorcycle, enables us to use sober and fluid lines placing the CONCEPT-E in a technological urban universe." Pierrick Pichaureaux, Head of design at Outercraft.

CONCEPT-E’s design is based on two key dynamics: the horizontal line bringing simplicity, and the oblique line, which perpetuates DAB Motors’s iconic "flying back" form, giving an impression of speed and lightness at the rear of the motorcycle. The designers and engineers studied the assembly of the materials for the swingarm and dashboard, to elegantly integrate the cables. The LED speedometer inserts directly into the triple trees projecting all the information on to the bodywork.

Minimalist and punctuated with innovation, the CONCEPT-E demonstrates DAB Motors’s desire to show only the essentials, and their signature design intention for future electric models.