FAW Trucks expands popular 8.140FL offering with the addition of an automatic transmission 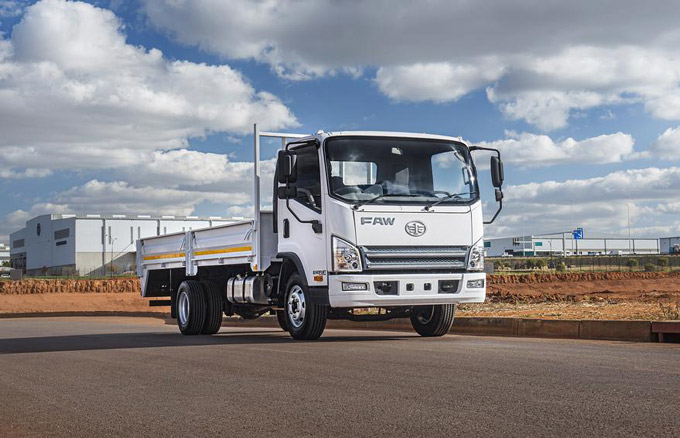 FAW Trucks prides itself on paying attention to what its customers require. It is in response to a strong demand for a value-for-money automatic offering in the medium-weight segment of the commercial vehicle market that it is introducing the 8.140FL-AT.

The 8.140FL-AT has a body and payload allowance of six tonnes, making it the ideal partner for businesses and fleet owners who require a vehicle of smaller dimensions, but with the same durability and ruggedness of its larger brethren. It provides seating for a driver and two passengers and features a spacious and ergonomically designed cab, while air-conditioning and a radio with MP3 and USB functionality are standard.

In its latest iteration it is fitted with a Euro 3 Cummins ISF 3,8-litre engine, an Allison 1000 six-speed automatic transmission and a full air dual circuit WABCO braking system with ABS.

When the 8.140FL was first launched in the local market, initially with only a six-speed manual transmission, FAW Trucks had taken a strategic decision to redesign and re-engineer the truck to be better suited to the demands of the local medium-truck market. Special attention was paid to combining cost-efficiency with the best possible payload and the best turnaround time, without sacrificing any of the quality for which the brand is known.

The SKD kits from FAW China Corporation include the cab, the chassis, axles and other sub-assembly components. Additional parts are sourced internationally and locally. This includes the full-air brakes and the anti-lock braking system, the power steering unit, the air-cut parking brake and the engine.

The latter is a high-pressure, common rail four-cylinder in-line powerplant from the reputable Cummins range and is ideally suited to the medium-weight truck category. Fitted with a turbocharger, it is water-cooled and intercooled.

Key features of the engine include exceptional performance, low operating costs, low weight, low noise and low emissions capabilities. Advanced thermal engineering has made it capable of running at higher operating temperatures, while at the same time reducing the size and cost of the vehicle’s cooling package. The modular architecture of the engine allows for easy access and single-side servicing, reducing operating costs. A waste-gated turbocharger provides excellent performance across the whole r/min range, as well as good response through higher low-end torque.

Along with this tried and trusted engine, the newly launched 8.140FL-AT features a six-speed fully automatic Allison 1000 transmission with a hydraulic torque converter. It also has dual overdrives, with the second overdrive ratio being rather high. This allows for low engine speeds at cruising rpm and, ultimately, enables significantly reduced fuel consumption.

Allison's specialty is commercial-grade automatic transmissions for medium and heavy duty applications and the company’s history includes the development of propulsion systems for aircraft and other military applications.

As far as the braking power of the 8.140FL is concerned, a four-circuit protection valve, full-air brake system ensures easier to maintain than vacuum-hydraulic or air-hydraulic braking systems. The addition of ABS and an air-cut parking brake on a medium-sized truck is invaluable to the safety of the driver, truck and payload.

The suspension is of the straight ladder-type with semi-elliptical leaf springs, together with front double acting shock absorbers and rear auxiliary springs.

The axles, graded for a permissible three tonnes in front and six tonnes at the back, provide ample carrying capacity.

The 8.140FL-AT will be available from FAW Trucks dealers in a number of body derivatives including a drop-side, a taut-liner option, a van body, a tipper, a roll-back and a dry-freight insulated body. Customers can also choose to purchase the chassis cab and fit their own truck bodies to suit their specific needs.

It is sold with a two-year/unlimited kilometre warranty and benefits from the full extent of sales and/or service from representative outlets across South Africa, Namibia, and Botswana. FAW Trucks has a dedicated national parts distribution centre in Spartan, supported by its branches in Durban, Harrismith and Cape Town, which act as hubs to support all FAW Trucks representatives and self-service operators.

Says Mr. Richard H. Leiter, Executive Director of FAW South Africa: “FAW SA is committed to offering vehicles engineered, developed and rigorously tested to meet the harsh operating conditions in Africa. To this end, the FAW 8.140FL-AT represents the strength, reliability, value for money and ease of operations that products from FAW Trucks are renown for. Most importantly, though, is that it too is a truck built for Africa, in South Africa.”