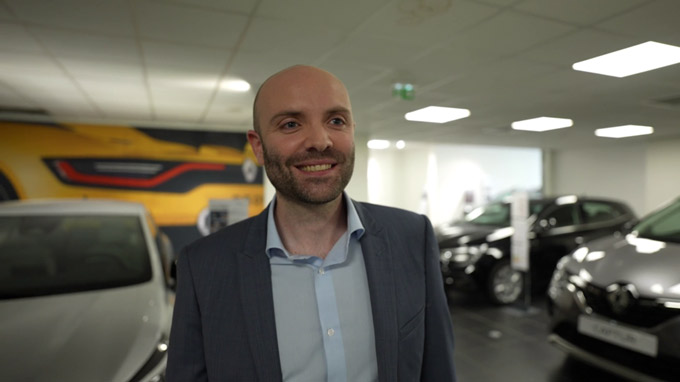 As European pioneer and leader for electric vehicles, Renault relies on the strength of its network of expert dealers. For Valentin, the journey began 10 years ago. He took his first steps at Renault Retail Group (RRG) as a sector dealer at the Renault Rive Droite dealership in Paris. He learned the ropes and soon became an electric vehicle specialist. He now puts his talents and keen advice to good use at the Boulogne-Billancourt dealership where, early this year, he sold his record-breaking 400th electric vehicle!

Valentin took a gamble on electric vehicles some 10 years ago and is now one of the many experts that constitute the strength of the Renault network. Now more than ever, he sees electric vehicles as being the future of automotive and has many an argument up his sleeve to prove his point!

The true strength behind Renault’s electric vehicle sales lies in the expertise of its network. - Valentin, Car Salesman, EV specialist at the Boulogne-Billancourt (France), RRG dealership

Renault’s interest in electric vehicles is anything but recent. As early as 1937, Renault was already looking into the merits of electric models as shown by the 35 Celtaquatre-inspired ‘electric’ taxis made for the Universal Exposition in Paris.

In 1937, Renault made 35 ‘electric’ taxis made for the Universal Exposition in Paris

In a response to issues of pollution that came to the fore in the late 1960s and the 1973 oil crisis, Renault has continually sought to invest in developing clean cars.

Those efforts came to a head in 2012 with the launch of Renault ZOE. As the first affordable and general public all-electric plug-in compact car, it embodied a major milestone for the brand with a diamond logo as it saw its ambitions evolve into a true success story.

Thanks to electric vehicle specialists in nearly all its 3,700 dealerships throughout France, "Renault has a range of electric models that customers like and appreciate because they fulfil certain requirements in terms of range, connectivity, and sustainable development” outlines Valentin.

With a WLTP range of 395km, numerous connected services on the MY Renault app and recycled materials, the 3rd generation ZOE has been built to please! Off-peak recharge scheduling, remotely activated cooling and heating for optimal comfort, real-time visualisation of available charging stations within range… this is just a small sample of the extensive range of features that have been thought of to make life easier for customers. That’s exactly what Valentin knows how to promote.

Visualisation of the attainable zone

The strength of Renault sales teams

An expert of E-mobility and passionate about his job, Valentin knows what he is talking about.

"Renault has spent many years developing expertise in electric vehicles, and us sales representatives can leverage that to our advantage. We know electric vehicles inside and out, we know all there is to know about maintenance, the different charger and charging station types, where charging stations are located, and then some. We have true know-how.”

Valentin’s great strength, beyond his theoretical baggage, is that he can also put himself in his customers’ shoes and give them a truly tailored experience.

"We ask where they live and what they will use their car for, and we find out their needs. We then help them right through their journey into the world of electric vehicles: available charging options in their neighbourhood, financial assistance, the advantages of EV parking, for example. We introduce them to the whole world of electric vehicles.”

Listening to and responding to customers’ needs is part of the Renault DNA. And it has served Valentin quite well so far! With his 400th electric purchase order for a ZOE closed last February and well on the way to selling his 500th EV before the end of the year, Valentin is Renault’s EV sales record holder.

With the Twingo E-TECH Electric padding out the range and a new generation of electric vehicles ready to hit the market in the near future – starting with the Megane E-TECH Electric – Renault is clearly determined to hold on to its position as EV leader in France and in Europe. The perfect recipe for Valentin to sell his 1,000th model far sooner than expected!