In Seville, Renault Group sets up a Refactory for its activities in Spain 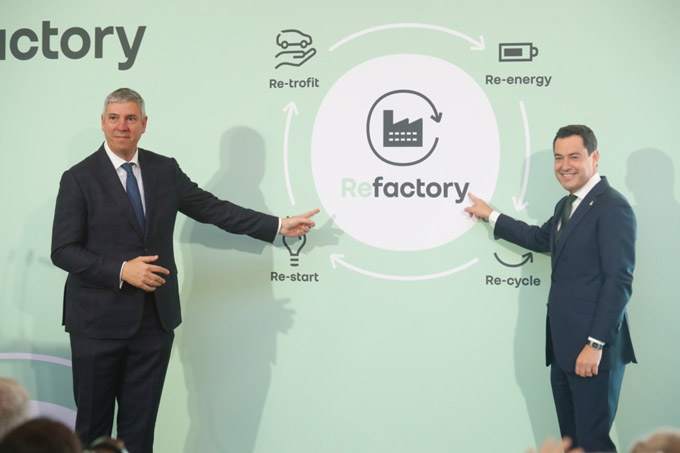 In the presence of Juan Manuel Moreno, President of the Andalusia region, Renault Group today officially launched a Refactory project at the Seville plant. As an extension of the programme implemented at Flins (Yvelines, France), which remains the Group's circular economy strategic hub for Europe, this new Refactory will bring together circular economy activities for Spain based on the vehicle's value potential at each stage of its life cycle.

José Vicente de los Mozos, EVP Industry, Renault Group, said: One year after the launch of the Refactory in Flins, which we are about to celebrate the first anniversary, this project illustrates the Group's strong ambitions in terms of the quality and sustainability of its products in order to meet the challenges of the ecological transition and the issues of more sustainable consumption. Thanks to their competitiveness, our Flins and Seville plants are now demonstrating their ability to invent a new profitable industry model for more sustainable mobility.

In order to convert the potential value generated by the circular economy into a growth lever, the Seville Refactory will be structured around four areas of activity, from maintenance to recycling, in order to support the entire life of the vehicle:

This announcement is part of the industrial plan for the Group's Spanish plants, presented last March for the period 2021-2024. This plan includes the allocation of five new vehicles and a new family of engines for the Castilla y León plants. The plant in Seville will handle the manufacture of two new models of electrified gearboxes for the Group's hybrid vehicles.