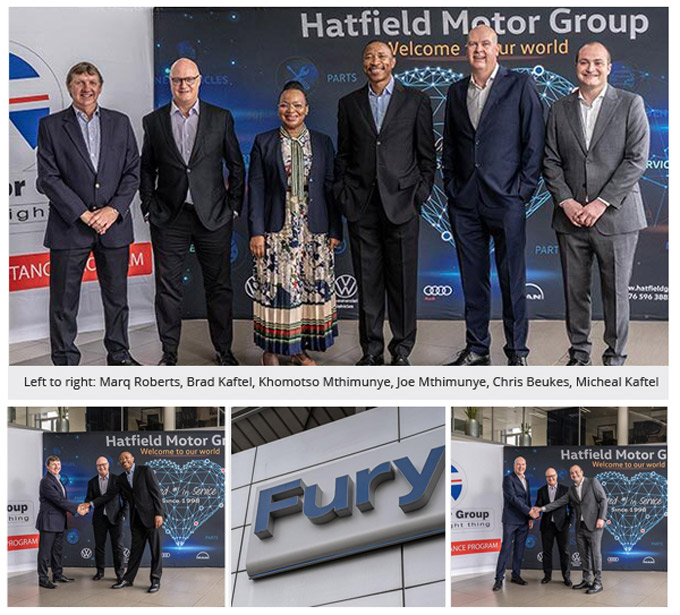 Hatfield Motor Group (HMG) is proud to announce the successful acquisition of the Fury Motor Group, expanding the group’s interest to include the Ford, Mazda, Suzuki, Haval, Isuzu, Renault, Honda, Opel, Fiat and Jeep brands. The Fury Group operates 22 franchises amongst these brands. In addition, the inclusion of 50% of the import and distribution rights for Triumph Motorcycles for South Africa, is a particularly exciting development since it opens a new industry segment for HMG.

For the past 23 years, HMG has cemented its business with the Volkswagen, Audi, Volkswagen Commercial and MAN Trucks/Buses franchises and has developed a reputation for customer excellence. HMG has been awarded the Volkswagen and Audi Group of the Year for the past seven consecutive years (2014 – 2020). Sales efficiency and innovation coupled with customer-centricity being the key focus of the Group.

HMG will now be operating 35 franchises within the South African retail motor industry.

The Kaftel and Mthimunye families are the ultimate shareholders of HMG and this partnership over the past 18 years has been highly successful. HMG is rated with a BBBEE Level 2 status of which Kaftel is particularly proud. “We will endeavour to expand this philosophy into the Fury Motor Group, which will be headed up by Chris Beukes as Managing Director,” he says.

The Fury Motor Group has been an equally formidable motor industry role player, successfully led by Managing Director Marq Roberts and Chairperson and founder of the group Ken Cosgrove. They have built up a highly successful business over the past 25 years. They have an outstanding reputation in the market and are highly rated by their customer base and their OEM principles.

Says Managing Director of HMG, Brad Kaftel: “We plan to further embed the successful business philosophy and processes developed by Fury over the past two decades.

Quintin Honey, Lara Granville and Deon Wilken were the attorneys who structured the deal. They are Directors at the law firm Cliffe Dekker Hofmeyr.

Investec Private Bank through its Private Capital and Structured Property Finance businesses have funded the transaction.

HMG enjoys a long-standing relationship with ABSA Bank, First National Bank, Wesbank, Nedbank’s - Motor Finance Corporation and Standard Bank and the association with these institutions will be expanded to include the new brands
and dealerships.

“HMG is a company that is highly rated by their employees which is evident in the low staff turnover rates, and we are eager to welcome the Fury team to our family,” says Kaftel, adding that trade unions representing the employees of both entities fully supported the merger. The merged entity is expected to create additional jobs as Group synergies are forecast to drive increased sales volumes.

“In closing, we’d like to thank the Competition Commission for its support and the efficient way the application was processed and completed.”