Market share of fuel types in the passenger vehicle market: SA is still lagging in comparison to other countries

The share of hybrid and electric vehicles in the South African passenger vehicle market is growing at a rather slow pace. Original Equipment Manufacturers (OEM) are directing more resources into developing low-carbon vehicles, with the intent of addressing the issues of CO2 emissions, and the ever- increasing cost of petrol and diesel.

Market share of fuel types in the Passenger vehicle market 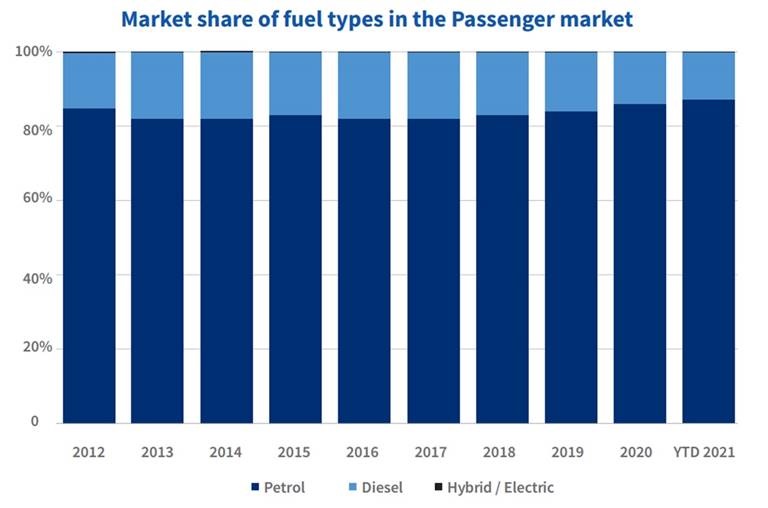 “There is a global discussion around non-fossil fuel powered vehicles, and many countries and OEMs have committed to targets aimed at phasing out petrol or diesel-engine vehicles, in favour of electric and hybrid options,” says Pieter Wessels, Managing Director, Lightstone Auto.

In parts of northern Europe, more than 50% of monthly new Light vehicle sales are either electric or plug-in hybrid vehicles, with vehicle types such as the Ford Mustang Mach-E, the Volkswagen ID.4 and the Volkswagen e-up dominating sales. Notably, a number of these countries have incentivised the purchase of hybrid or electric-powered vehicles through various tax exemptions, making them competitively priced when compared to petrol-powered vehicles.

“In South Africa, we are not quite there yet with only 0.1% of passenger vehicles sold in 2021 being either electric or hybrid options; a trend we’ve seen over the last decade,” Wessels adds, “The limited number of options, and the associated price tags attached to these vehicles have dampened appeal among consumers. The sparse (albeit growing) charging network availability and an unreliable electricity infrastructure in the country has also had an impact on sales.”

Share of hybrid / electric power in the Passenger vehicle market 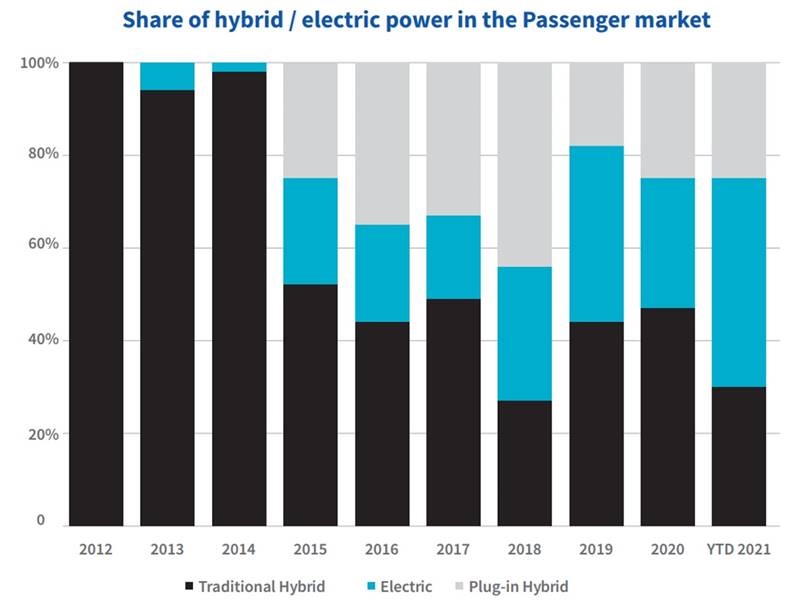 The information also revealed that in 2012 only five *marques had a hybrid offering in the local market, with domestic sales being dominated by Toyota, Lexus, and Honda. Currently there are a total of 11 marques.

The change in the spread between the traditional hybrid, the plug-in hybrid, and the all-electric sales has also been significant, with the latter, after humble beginnings in 2013 (6% of hybrid / electric sales), gaining momentum as more options entered the market and currently holding a 45% share of the hybrid/electric market.

Wessels concludes, “In South Africa, we have yet to see the hybrid/electric market make any significant inroads into the petrol/diesel market share. Since 2015, the weighted average price of hybrid and electric vehicles has consistently exceeded that of the overall Passenger vehicle market, occasionally at levels more than double the market average.”

*A marque is the name of a famous company that makes motor vehicles, or the vehicles it produces.