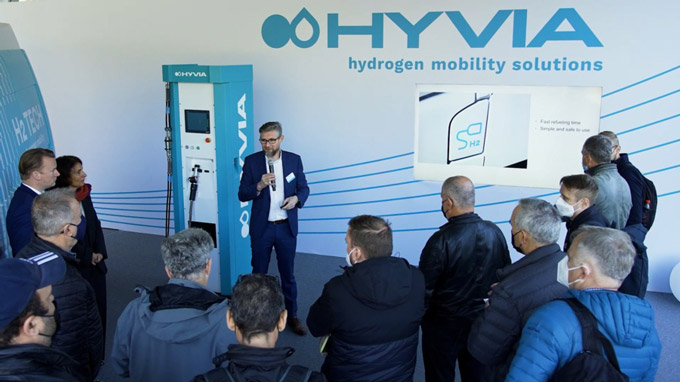 Having already revealed three green hydrogen prototypes in the seven months since its creation, HYVIA – the company born of the union between Renault Group and Plug Power – has made ‘speed’ the name of the game. CEO, David Holderbach, explains how he rallied together a team of people who dream green and why it has been crucial to act fast.

Last January, Renault Group CEO, Luca de Meo, revealed the Group’s Renaulution strategy and announced a considerable push into market of hydrogen solutions. HYVIA, a 50/50 company between Renault Group and Plug Power, was launched in June as a response to the urgency of the situation. The company’s guiding principle is to act fast as the energy transition can no longer wait.

While it usually takes a few years to design a vehicle, everything at HYVIA is fast paced. Between June and December, it staffed teams, unveiled three prototypes for hydrogen-powered Light Commercial Vehicles, was part of numerous events on sustainable mobility, and started tests for its production models. All before even celebrating the company’s first anniversary!

The birth of HYVIA is remarkable, both in how it was created and in the design of its prototypes. We all had to act fast, and move together, to devise ways to decarbonize mobility.

With tightening environmental regulations and general consensus heading in the same direction, HYVIA knows that it must act fast in order to provide an organised response that meets customer expectations by breaking through the current constraints of hydrogen. The young brand has embarked on an adventure that brings together skilled and enthusiastic people.

David Holderbach and his team embody agile management and the start-up mindset: make speedy decisions, streamline processes, and seek out and utilise skill sets wherever they may be. HYVIA, is a family of 50 employees with plenty of motivation to share around, excited to tackle the challenges of hydrogen-powered green mobility. A group of people driven by their shared desire to have a positive impact on the energy transition. Low-carbon transport: that is their north star, a goal they all embrace. In the eyes of David Holderbach, this is the sort of enthusiasm that is essential if the company is to reach its ambitious goal of achieving 30% market share in the hydrogen Light Commercial Vehicle market by 2030.

The team embodies agile management and a start-up mindset

Changing the game in 200 days

In less than 200 days, HYVIA has already marked some major milestones. Three hydrogen vehicle prototypes have been launched since its inception: Renault Master Van h3-TECH, Renault Master Chassis Cab h3-TECH, and Renault Master Citybus h3-TECH. HYVIA has also included a refuelling station solution because the company sees little point in selling vehicles without also a comprehensive solution for hydrogen refuelling and recharging. A feat that builds on the combined expertise of Renault Group and Plug Power. Nicolas Benech, Director of Engineering, talks us through the journey and the reasons behind their motivation:

We learn as we go. There is a real emulation, a buzz, a desire to really understand what’s at stake and offer quick solutions. We look to the teams at Renault Group for their experience in Light Commercial Vehicles, and the people at Plug Power for their in-depth knowledge of hydrogen solutions. We are now in the testing and convergence phase for our first vehicles!

A green future is now

For fleets operators and local governments that use vehicles intensively, the current range of hydrogen solutions is lacking. The solutions on offer are poorly adapted. To meet the growing demand that is gaining in urgency, HYVIA has developed a unique ecosystem based in France. To speed up the process, the company has chosen to alter Master E-TECH Electric models made in Batilly (north-eastern France) and assemble fuel cells and refuelling stations at the Flins Re-Factory on the outskirts of Paris.

As David Holderbach points out, "We are in contact with fleet operators and local governments, 'early adopters' who wish to go hydrogen. We want to offer them turnkey hydrogen solutions: in other words, hydrogen vehicles and green hydrogen fast-refuelling stations.

Driven by the desire to be a part of the change that is under way, HYVIA it is taking fast action and embracing a journey that has only just begun.

In 2022, HYVIA will roll-out its comprehensive ecosystem, with three products designed specifically for corporate and local government fleets: