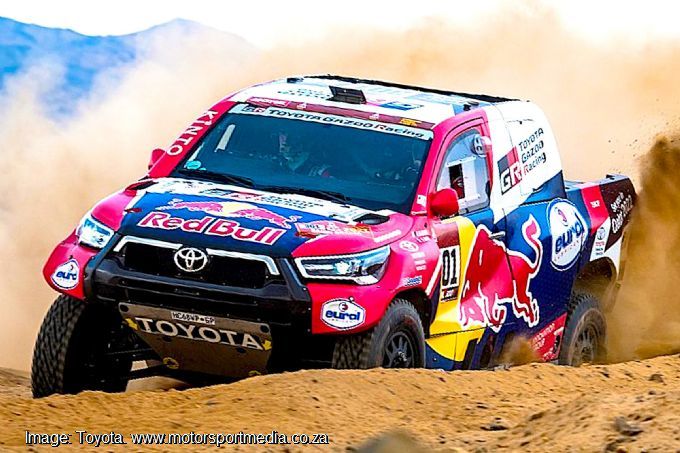 South African cars and crews starred, as against all odds, Dakar 2021 came under starters orders earlier today. 286 cars, bikes, trucks and other contraptions hit the road in anger in Saturday's Prologue, to determine their starting order for Sunday's opening stage.

Sheikh Al Qassimi's Peugeot starts ninth ahead of Sebastien Loeb in the Hunter. The fancied Mini buggies driven by Stephane Peterhansel starting 14th and Carlos Sainz 28th, and SA hero Giniel de Villiers in 18th are set for a dusty start on Sunday. Another South African crew, Shameer Variyawa and Dennis Murphy were a provisional 26th in their Gazoo Toyota Hilux.

On two wheels, defending champion Ricky Brabec made his last off road position count as he went fastest by six seconds from Honda teammate Joan Barreda Bort, with rookie Daniel Short’s KTM and Botswana’s Ross Branch a splendid fourth on his Dakar factory debut for Yamaha.

Hero rider Sebastian Bühler was a fine fifth for Hero from Andrew Short's Husqvarna, Kevin Benavides on another Honda, Pablo Quintanilla's Husqvarna, Toby Price's KTM and Joaquim Oliveira on another Hero. Botswana gentleman rider James Alexander will line up 84th on his Yamaha.

Another WRC star Kris Meeke was quickest of the Light Cars on his dubut run in the Dakar for PH Sport. He beat US pair Seth Quintero and Mitch Guthrie's REd Bull OT3s. Alexandre Giroud will start first of the quads when Dakar gets under way on Sunday. The Frenchman was quickest in Saturday’s prologue ahead of Manuel Andujar and Kamil Wisniewski.

The Truck Prologue was yet to resume at the time of writing — come back later for news of those frontrunners.

Saturday’s Prologue does not count toward the actual Dakar 2021 race. The 25 km stage is purely to set the starting order for Sunday’s opening stage of the 4800 km race through the Arabian Desert over the next two weeks.

Fans can follow the Auto Live Ticker to keep up with the Dakar 2021 action as it happens every day throughout the next two weeks on theauto.page/sport. A full race report will be published on www.motorsportmedia.co.za as soon as possible after the car finish each day.