Al Rajhi, Brabec win on a tough day in the desert 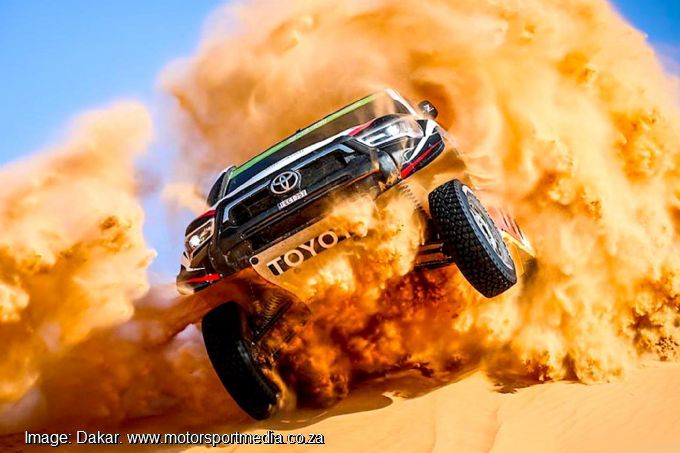 Among those to struggle were Botswana bike hero Ross Branch, who lost over 40 minutes as he duct taped his Yamaha back together after an early crash. He was still fastest of all in the middle of the stage as he charged home on his damaged machine. Giniel de Villiers and Alex Haro Bravo had a tough day, losing close to 50 minutes when they suffered four punctures on their Gazoo Hilux and had to wait for spare wheels. They still moved up to 8th overall at Baragwanath’s expense.

SA car stars Baragwanath and Taye Perry were struggling to the finish as we wrote, after hitting trouble in their SA-built Century early in the day. Shameer Variyawa and Dennis Murphy on the other hand enjoyed a positive run home to 17th in the third Gazoo Hilux.

Peterhansel had made the day his own as he charged away up front after Mini teammates and 2020 winners Carlos Sainz and Lucas Cruz dropped out of the lead early on and second overall Nasser Al Attiyah’s Gazoo Toyota Hilux charge slowed. That left Al Rajhi in second and able to strike as Peterhansel faltered, to take a delighted home stage win and his first at the Dakar since his maiden day victory in 2015. Botswana gentleman biker James Alexander was still running on his Yamaha.

13-time Dakar winner Peterhansel was left to chase Al Attiyah home on the road to claim second in the  cars and open his advantage up to just under 8 minutes over the Qatari triple-Dakar winner overall. Fellow triple-winner Carlos Sainz remains third, 41 minutes off the lead. Although he has led from the second day, Peterhansel has not won a stage on Dakar 2021.

Of the rest, Kuba Przygonski and Timo Gottschalk’s Hilux came home fifth on the day from Cyril Despres and SA adventurer Mike Horn’s Peugeot sandwiched by Yazeed Seaidan’s and Alexey Kuzmich and Matiu Serradori and Fabian Lurquin's SA-built Century-Corvettes. The consistent Vladimir Vasilyev and Dimitri Tsylo’s Mini 4x4, the Hunter BRX driven by Nani Roma and Alexandre Winocq and Sheikh Khalid Al Qassimi and Xavier Panserai in a Peugeot were next home.

Californian Ricky Brabec made it a factory Honda 1-2 as he led Chilean Ignacio Cornejo Flormino in to the Marathon bike bivouac at Sakaka. KTM trio, American privateer Skyler Howes, Brit Sam Sunderland and Aussie Daniel Sanders were next up ahead of French marquis Xavier Soultrait, and Australian Toby Price, who had fought at the front but dropped to end up sixth on his KTM.

Friday's winner Joan Barreda struggled to 14th as he opened the road, Honda teammate Kevin Benavides led but fell back to 8th and Branch ended up 27th for the day after dropping back below 80th. The flip-flop lottery Dakar Bike overall lead was turned on its head again as Flormino now leads from Price, Sunderland and Soultrait, with today's troubled Benavides and Barreda also within ten minutes of the lead. Branch has slipped to 15th.

In other action, Saleh Alhisaif was looking good to make it a Saudi double on the day with 150 km left to race in the Light Cars aboard his Can Am as we wrote. He led the similar machines of Reinaldo Varela and Aron Domzala. Manuel Andujar led Italo Pedemonte and Alexanre Giroud in the Quads and Dimitri Sotnikov led Andrey Karginov, Anton Shibalov and Airat Mardeev in a Kamaz 1-2-3-4 among the Trucks.

Sunday's bivouac sees riders, drivers and navigators servicing their own vehicles at the midpoint of the two-day marathon stage that continues with 375 km of racing to Neom on Monday.