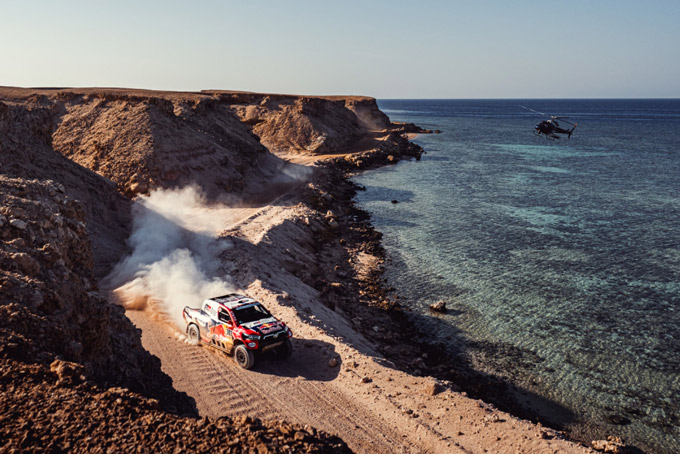 Stage 9 of Dakar 2021 saw TOYOTA GAZOO Racing’s leading crew, Nasser Al-Attiyah and Mathieu Baumel, lose ground to the overall race leader, Stéphane Peterhansel, over the course of a 465km-long special stage that started and finished at Neom, on the Red Sea coast. Two punctures early in the stage forced Al-Attiyah/Baumel to be cautious, and in the end they surrendered 12min 00sec to the overall lead.

Punctures also hampered the progress of Giniel de Villiers and Alex Haro, who suffered two flat tyres within 2km of each other early in the stage. The pair were forced to drive in the dust of slower competitors after losing significant time on Stage 8 – a result of four punctures on the day. Stage 9 saw them approach the stage with caution, but they managed the third-fastest time on the day, finishing just 19sec behind teammates Al-Attiyah/Baumel.

“If you look at the overall result, we’re now nearly 18 minutes behind Stéphane,” said a clearly frustrated TOYOTA GAZOO Racing Team Principal, Glyn Hall, from the bivouac at Neom. “I don’t like depending on someone else’s misfortune to win a race, I want our team to be the fastest. But if I reflect on the whole race, we’ve now had 48 punctures between the three cars still running. And simply put, that’s just too many, and it has taken the edge off the race for us. It means we can’t really have a strategy, we can’t plan anything as a team, and as a result even Nasser is pretty down at the moment. Today was a stage when he really needed to gain some time, but instead he had two punctures. He said he hit nothing in the road, and on inspection we found only small holes in the tyres. Nothing like the cuts that you’d expect if he had been off the road. It is really difficult to push for a win when we face these challenges, like 48 punctures.”

Shameer Variawa and Dennis Murphy suffered only a single puncture in Stage 9, but the navigational errors slowed their progress. The pair started as the 7th car into the stage, after a good performance on Stage 8. But time lost searching for two waypoints saw them slide to 18th on the stage, losing 32min 35sec on the day. Despite this, they’ve improved to 23rd in the overall standings, with three stages to go.

Stage 10 will see the rally return to the spectacular rock formations and canyons around Al Ula. The timed section of the stage is 342km long, with a liaison distance of 241km. Crews will leave behind the shores of the Red Sea as they turn inland, before taking on the final stages over the coming days. Dakar 2021 is set to finish in Jeddah on Friday, January 15th.