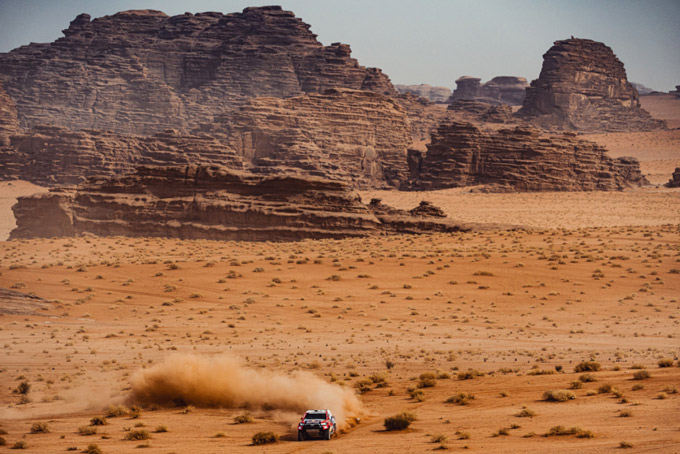 Another set of solid results saw TOYOTA GAZOO Racing consolidate their position at Dakar 2021. The team’s leading crew, Nasser Al-Attiyah and Mathieu Baumel, finished second on the stage, trailing stage winner Yazeed Al Rajhi (Toyota Hilux) by just 2min 04sec at the end. Al-Attiyah/Baumel also gained 49sec over rally leader Stéphane Peterhansel (MINI), but still trail by 17min 01sec in the overall standings, with two stages to go. Stage 10 brought the rally from Neom to the canyonlands of Al-Ula, with a timed section of 342 km and liaisons of 241km.

Giniel de Villiers and Alex Haro struggled in dust early in Stage 10, before finding themselves slightly off the ideal route and in thick camel grass. This cost them some time, but they re-joined the main track shortly after and managed to post the 6th-fastest time, 6min 12sec behind Al Rajhi. They suffered no punctures on the day – their first puncture-free stage of the event – though they had to change a wheel due to a bubble in one of the sidewalls. They managed this task during one of the decontrolled sections, so it didn’t cost them any time.

Stage 10 brought another clean run for Shameer Variawa and Dennis Murphy, whose only complaint was the thick dust kicked up by slower competitors, which hampered their progress somewhat. They also recorded a puncture-free day and finished 14th on the stage.

With ten stages behind them, Variawa/Murphy find themselves in 23rd place overall, 8hr 4min 01sec behind the leaders. De Villiers/Haro are up into 8th place, 3hr 43min 28sec behind Peterhansel.

“Toyota had another really good stage today,” said TOYOTA GAZOO Racing Team Principal, Glyn Hall, from the bivouac at Al-Ula. “Yazeed won the stage, with Nasser in second, so we couldn’t really ask for much more. But the reality is that we are still more than 17min behind Peterhansel, and though we’ll never give up the fight, the fact is that we are running out of stages. Tomorrow is the last big stage, so let’s see what Nasser and Mathieu can do. But we can certainly be proud of the number of Toyotas in the top positions even now.”

The penultimate stage of Dakar 2021 will see the crews race from Al-Ula to the town of Yanbu, on a route that was shortened from 511km to 464km due to erosion in the final sections of the track after heavy rains in the area. The race is set to finish in Jeddah on Friday, January 15th.