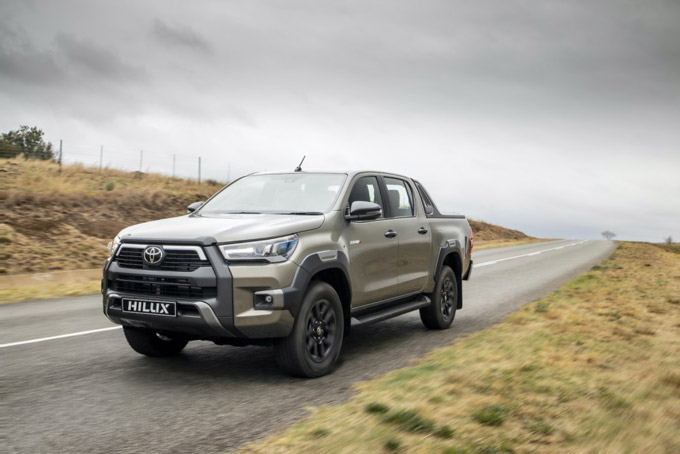 Toyota South Africa Motors (TSAM) has kicked off the 2021 retail calendar with 9 033 units sold in January. This translates to a remarkable market share of 26% out of the 34 748 total units sold in South Africa this year. Toyota’s best-selling vehicle was the Hilux, confidently shifting 2 661 units for the month.

TSAM’s Senior Vice President of Sales and Marketing, Leon Theron, points out: “Testimony to the enduring appeal of the Hilux nameplate is the fact that it still managed to garner the top spot for SA’s best-selling commercial vehicle. What’s also really telling is that 2 383 of these Hilux sales were via the dealer channel – higher throughput than any other model sold in SA.”

In addition to being overall leader across all segments, the Hilux has also propped up sales in the LCV category, helping Toyota to an admirable share of 41.9% in this classification. Other notable performances in the LCV category include Hiace with 785 units as well as the evergreen Land Cruiser Pick-up with 268 units sold.

The total sales of new passenger vehicles at Toyota for the month was 5 015 – which accounts for a market share of 21% in the hotly contested segment. TSAM’s performance in this category continues to reflect the popularity of the company's SUV range with sizeable contributions coming from the segment-leading Fortuner which retailed 820 units and the RAV4, which had a similarly good showing with 436 units sold.

Other noteworthy sales performances were recorded by four of the company’s more affordable models, namely the Corolla Quest (1 024), Starlet (995), Agya (512) and Avanza (421). On the luxury front, the Land Cruiser 200 and Prado posted sales of 187 and 156 apiece, while the more niche Lexus NX and LS sold 11 and 10 units, respectively.

To keep Toyota, Hino and Lexus vehicles in good running condition, a total of 108 807 models were serviced last month while no less 1.22 million part pieces were supplied to domestic dealers, with a further 278 539 shipped outside of the country.

According to the National Association of Automobile Manufacturers of South Africa (NAAMSA) domestic sales at 34 784 units reflected a decline of 5 629 units, or 13.9%, from the 40 413 vehicles sold in January last year.

“It should be noted that the 2020 new vehicle market recorded its lowest aggregate sales total in 18 years. The macro-economic effects of COVID-19 will therefore continue to undermine business and consumer confidence and inhibit growth over the medium term. Although the current low interest rates, coupled with low inflation, could be regarded as building blocks to stimulate the new vehicle market, a full recovery to pre-COVID-19 new vehicle sales levels could take around three years,” says Naamsa.

Globally, Toyota recorded a total of 9.53 million units last year, including those sold by its group’s mini-vehicle maker Daihatsu Motor Co. and truck manufacturer Hino Motors Ltd., with the overall figure down 11.3% from a year earlier. Despite sales contracting, Toyota nevertheless managed to regain the top spot as the world’s largest retailer of motor vehicles. The company’s aggressive sales strategy, which saw it roll out a series of new models, contributed to relatively solid sales in 2020 compared to other automakers.

Regarding the local market’s outlook, Theron says: “In the light of the first month’s sales, I’m cautiously optimistic about 2021. We’re still battling COVID-19, consumer sentiment is low and unemployment is rife… but we continue pinning our hopes on the resilience of our nation. We also believe in the strength of our dealer network, the loyalty of our customers, the commitment of the entire TSAM workforce as well as the quality of products.”