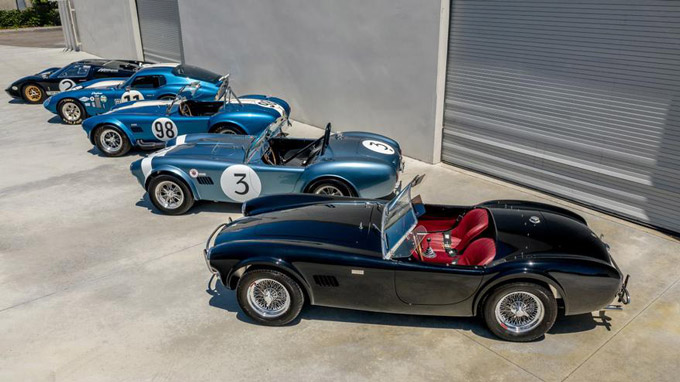 One of the most famous motoring love stories is the one between Carroll Shelby and Ford Motor Company which began in the 1960s. Despite Carroll Shelby’s passing in 2012, it’s a love story so powerful that it continues to be celebrated the world over with new anniversary models dedicated to the legend himself. These include the Shelby GT-H, Super Snake and the many Heritage Cars.

Love for Ford comes in many shapes and sizes but the match between Carroll Shelby and Ford stands out as a highlight, and for this reason Ford South Africa is paying tribute to its relationship with Shelby during this Month of Love.

“Throughout Ford’s history, certain individuals have been destined to leave their indelible mark for all to see and experience for generations to come. Carroll Shelby was one such person - an extraordinary human being who took the world by storm through his achievements with Ford from the very beginning. It is a love story for the record books and Carroll’s fierce passion as well as his dedication still shines through Ford Motor Company and Shelby American,” says Atloli Lesela, Brand Manager at Ford South Africa.

A chicken farmer by profession, Carroll also had a passion for motor racing and horsepower which earned him a spot in the US Automotive Hall of Fame. During the 1960s, he was fascinated by Ford’s V8 engine and believed that it was well-suited to all forms of motor racing. Under his own company, Shelby American, he began transforming the AC cars by fitting Ford V8 engines to them.

He didn’t need to wait long for success; his first labour of love produced the race-winning AC Cobra throughout highly competitive motorsport events in the USA and in Europe. The Cobra’s successor, the Shelby Daytona Coupe also won the World Manufacturers’ GT Championship, bestowing it with the honour of being the first American vehicle to win the prestigious championship. At the same time, the Cobra was a major success for Ford dealers, and together Ford and Shelby would define the muscle car segment and lead it into the next chapter with the Ford Mustang.

Shelby’s influence with the Mustang brought the muscle car’s past, present and future together all at once. At the time, Lee Iacocca, Ford Division General Manager, was concerned that the Mustang, while selling well, lacked a performance image. He enlisted the help of Carroll Shelby and when the Mustang GT 350 made its debut in 1965, it quickly established the Mustang as a thoroughbred performance icon – both on the road and the track. Carroll’s love for the Mustang nameplate continued to be amplified with the GT500, added in 1967. This was the first time that the Mustang’s hood was enlarged to hold a big block V8, and that performance heart and soul is still a vital part of the Mustang’s DNA many years later.

At around the same time, Carroll had taken over Ford’s GT40 program with one of the main objectives being to beat Ferrari at Le Mans. This heroic and triumphant story has been recreated in the movie Ford v Ferrari with Matt Damon playing the role of Carroll Shelby. Interestingly, Carroll Shelby is the only person to win the 24 Hours Le Mans as a driver and as a manufacturer with the Cobra Daytona Coupe.

After a hiatus, which saw Carroll travel around Africa, he returned to the Ford Mustang. Although the Mustang had evolved into a modern-day sports car for new markets around the world, Carroll was still able to add his own character, unique power modifications and cosmetic upgrades with a series of special editions.  Shelby upgrades on the Mustang continue to be carried out at authorised Shelby mod shops globally. “There are only seven Mod Shops outside of America,” says Peter Lindenberg, owner of Shelby South Africa. “Two are in Canada and Europe and then one in Australia, China and South Africa in Malmesbury, Western Cape. Our technicians are trained at Shelby American and we only use Shelby components.”

“For those who are looking for real American muscle in a car that historically has proven to have a future embedded value, there is nothing out there to compare with Mustangs, and the range of Shelby Heritage cars including Shelby Daytona, Shelby Cobra and the GT40 MKII from the Shelby stable. Owners of Shelby vehicles feel the love for their ride on a daily basis,” says Lindenberg.