Volkswagen, still the most awarded brand in the history of the Cars.co.za Consumer Awards 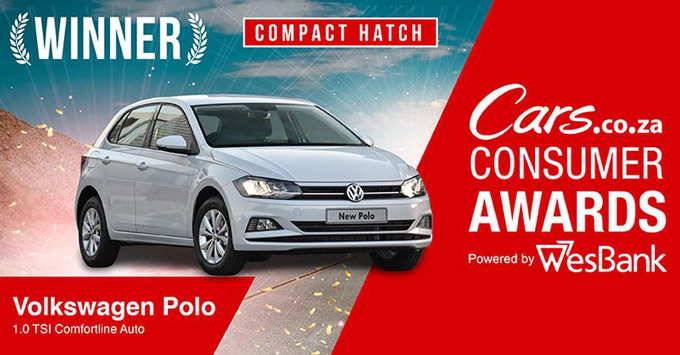 Volkswagen won three category awards at the annual Cars.co.za Consumer Awards which were broadcast on national television on 15 February 2021.

The wins at the 2020/2021 Consumer Awards come after a record-breaking 2020, where the Volkswagen brand in South Africa achieved a 21.6% passenger car market share, the highest in the history of the brand as well as the highest of all Volkswagen markets worldwide.

“With 50% of the final scores being based on after-sales data that incorporates customer feedback from South African vehicle owners, as Volkswagen we are proud of how our customers continue to put their trust behind our incredible range of vehicles,” said Mike Glendinning, Director: Sales and Marketing at Volkswagen Group South Africa.

Widely regarded as South Africa’s most definitive and prestigious automotive awards programme, the Cars.co.za Consumer Awards, which are supported by WesBank, have become a highlight in the automotive calendar since the inaugural event six years ago.

Volkswagen’s first win of the night was the Compact Hatch category which went to the Polo. The Polo has won this category for the last three years. The Polo is also South Africa’s second best-selling passenger car with 16 335 units sold in 2020.

The second award for Volkswagen went to the Golf GTI TCR which is a final swansong of the Golf 7 model range. With less than a year on sale in South Africa, the Golf GTI TCR won the fiercely contested Hot Hatch category. This is the fifth time in the six-year history of the Cars Awards that the Golf GTI has won this category.

With less than two years since being introduced in the local market, the T-Cross defended its Compact Family Car title with a back-to-back win. The T-Cross has also become Volkswagen’s best-selling imported vehicle with 5 693 units sold in 2020.

“The fact that the locally-manufactured Polo has won the Compact Hatch category for three years in a row, is a testament of our world-class manufacturing facility in Uitenhage. I am also incredibly proud of the how our compact SUV, the T-Cross, has managed to not only defend its title with another win this year, but has become a dominant player in the A0 SUV segment. As Volkswagen gears to launch the Golf 8 GTI in South Africa from the second quarter of this year, the win by the Golf GTI TCR is a fitting tribute to the Golf 7 range in South Africa,” concluded Glendinning.

The Volkswagen brand still holds the record of the most category wins in the history of the Cars Awards; since inception Volkswagen has won 19 categories at the Cars.co.za Consumer Awards.