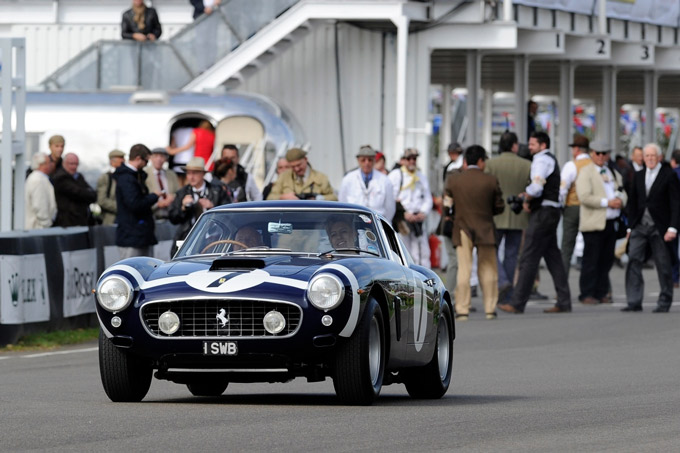 Once again, the prestigious event assembles the finest collection of cars ever, in the heart of the City of London

The London Concours 2021 once again gathers together the most incredible collection of vehicles ever witnessed in the City of London, across three days, when proceedings begin at the Honourable Artillery Company from 8-10 June.

Nearly 100 performance icons, past and present, will park up on the five-acre oasis of manicured lawn, hidden just off City Road – a mere stone’s throw from iconic London landmarks such as the Barbican and the Gherkin – from 8-10 June 2021. The main concours line-up of judged vehicles is split into classes which have been carefully curated to provide one of the most eclectic London Concours events so far – visitors can expect classes such as ‘Italian Berlinettas’, ‘Great Marques’, the ‘Lost Marques’ and ‘Iconic British Designs’ among many more.

The Italian Berlinettas class is a celebration of the golden era of sports car design from the country that was simply untouchable for creating masterpieces, this class is a collection of the finest Italian coupé designs of the ‘60s. The class will feature everything from a Ferrari 250 GTE, through the Ferrari 275 GTB 6/C to the De Tomaso Mangusta and the Alfa Romeo Sprint Speciale – this class features 11 of the most beautiful and iconic Italian cars ever made.

The Great Marques class this year celebrates Porsche and Lotus. From 356 to 911, there’s no shortage of automotive legends in the Porsche line-up. The challenge was whittling them down to just 10 of the rarest and most spectacular for this ode to Stuttgart’s finest. And for Lotus, with a long lineage of motorsport heroics and a model line-up of some of the most thrilling cars ever created, Lotus rightly takes its place in the spotlight at the London Concours this year – as the pursuit of lightness, visualised.

In an industry that is fast-moving, heavily regulated and often financially ruinous, manufacturers that may have deserved to stay, are often forced to disappear. The Lost Marques class is a celebration of some of the best marques that are no longer in business. This class will feature ten cars, from some of the finest manufacturers that no longer grace modern showrooms. The cars on display encompass everything from the Austin Healey Frogeye Sprite to the Iso Rivolta, and from the Sunbeam Tiger all the way through to the unusual Unipower GT.

The Iconic British Designs class features some of the finest British automotive designs of all time celebrated alongside their designers. Think Spen King and the Range Rover, Peter Stevens and the XJR15 or Frank Stephenson and the McLaren 12C. 10 of the most celebrated of British designs will feature in what is possibly the most eclectic classes in the show with designs ranging from the ultra-compact original Mini to the elegant lines of the Aston Martin One-77.

When it comes to British designs, however, there is one that people cite more than any other. At this years’ London Concours there is a display dedicated to the Jaguar E-Type. This year marks the 60th anniversary of the unveiling of the E-Type, the start of a transformation from automotive icon to cultural phenomenon. Its popularity has never faltered, and the car is celebrated at London Concours this year with 11 of the finest examples. Ranging all the way from the early series one cars, through to series three and not forgetting the stunning low drag and lightweight coupes as well as the inimitable Group 44 race car.

Bringing the London Concours a touch more speed, the 200mph Club will celebrate the early pioneers and recent contenders from the world’s most famous manufacturers – that have broken the 200mph barrier. Once the holy grail of performance, the 200mph-mark still remains out of reach to all but the most exotic of vehicles. In this class we celebrate 10 legendary vehicles that have achieved the feat, from the Ferrari F40, F50, F60 and LaFerrari, through Lamborghinis and Bugattis old and new, as well as more modern metal such as the McLaren Senna.

The event this year is spilt over three days, extended from two in 2020. The first day will be a VIP preview day for car owners, VIP guests and media. The second day is style day, where the event shines a spotlight on the worlds of design, fashion and luxury. While the third day is supercar day where the event will welcome a collection of the latest performance innovators into the HAC. These will include the latest offerings from Bugatti, Ferrari, Lamborghini and many more, with these cars joining the collection of 70 vehicles already on display.

Supercar day sees the London Concours turn its attention to the very latest marvels of high-performance automotive endeavour: the Supercars. On Supercar Thursday, selected owners of up to 60 of the finest road cars will drive them into the private, hallowed grounds of the Honourable Artillery Company, and form a world-class display of supercars for London Concours visitors to marvel over.

Outside of the car displays, London Concours will also feature a number of pop-up luxury boutiques, including most notably that of Breguet as the Presenting Partner of the event. The company will bring to London Concours, a collection of its most rare vintage timepieces, freshly serviced and restored. Argent, Bell Sport & Classic, Everrati, Thornley Kelham, Nicholas Mee & Co, Rodin and JIA will also be showcasing their latest offerings at the event.

Billed as the ultimate luxury automotive garden party in the heart of the City, London Concours features a number of premium food and drink options, including cocktails and champagne by Veuve Cliquot. There are also a number of lunch and evening food options with cocktails for entertaining, from catering partner Searcys – for more information click here.

Tickets to the London Concours are available from londonconcours.co.uk, with a full day adult admission ticket costing £40, and concessions from £20.

Featuring in the ‘200mph class’, the F50 is part of an illustrious list of Ferrari’s flagship cars, including the F40, the Enzo and – most recently – the LaFerrari. The 4.7-litre V12 engine was developed from Ferrari’s Formula One engine of the time, helping the car to reach a top speed of 202mph – and thoroughly earning its place in this elite club.

A true example of 1960s elegance, the 250 GT SWB is a stunning mix of gorgeous form and racing function. Powered by the much-revered small-capacity ‘Colombo’ V12 engine, the SWB is as captivating to drive as it is to look at. You’ll find it this year in the ‘Italian Berlinettas’ class along with 10 of the most beautiful Italian exotics ever created.

The One-77 is one of the rarest Aston Martins ever produced, with just 77 built. Priced when new from just over £1m, the One-77 is powered by a 7.3-litre V12 engine and can hit 220mph. The car is celebrated in 2021 alongside designer Marek Reichman in the Iconic British Designs class.

Mechanically based on the Le Mans-winning Jaguar XJR-9, the XJR-15 was produced by JaguarSport a subsidiary of Jaguar and Tom Walkinshaw Racing. Powered by a 450bhp, 5.9-litre mid-rear mounted all-alloy Group C-spec V12 engine, inside a carbon-fibre tub, this XJR-15 is One of only 27 road going examples produced – and will be celebrated alongside its designer Peter Stevens in the Iconic British Designs class.

Built as a homologation special, only 500 of the early ‘thin-gauge’ lightweight 2.7 RS models were ever built. The first model to wear the ‘RS’ moniker, the 2.7 represented, for many, the pinnacle of the 911’s career. Sporting wide wheel arches and the iconic duck-tail spoiler, the car’s distinctive profile is immediately recognisable. It will be part of the ‘Great Marques – Porsche’ display.

Another road-going homologation car, the legendary Porsche 959 was originally designed to compete in the infamous ‘Group B’ rally class. Only 292 cars were ever produced. When it was launched, the 959 was ‘the fastest road-legal car in the world’ serving as a testbed for Porsche for both turbocharged power and all-wheel drive – technologies which have made their way into many modern Porsches. Again, this car will feature in the ‘Great Marques – Porsche’ display.

Another example of 1960s elegance, an ultra-lightweight two-seater coupé, the Elite or ‘Type 14’ was produced from 1958 to 1963. The car’s most distinctive feature was its fibreglass monocoque construction, which was used for the entire load-bearing structure of the car save a steel sub-frame which supports the engine and front suspension. Only 1,030 Elites were built. There will be one in the ‘Great Marques – Lotus’ display.