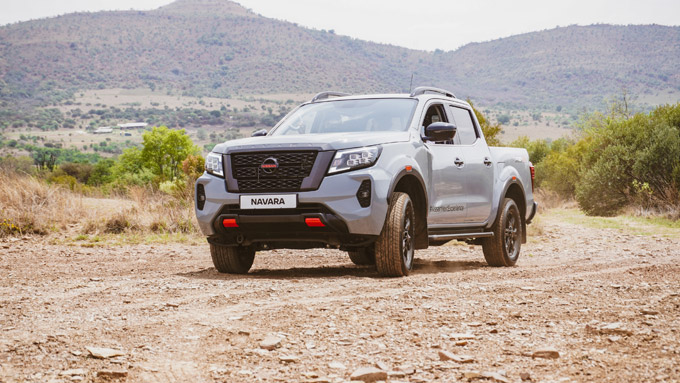 In early October 2021 I attended an interesting function in Hartbeespoort, where selected senior South African and Pan African journalists were introduced to the Nissan Navara family range, and in a series of activities we were shown its impressive capabilities

An enjoyable day indeed, spiced up by the banter between the macho males and the high heel shoe brigade of female warriors. While we put the Navaras through their paces, I started to see the similarities between our antics on the test tracks, and the stand-up comedy “Defending the Caveman”, which attempts to resolve the war between the sexes. The play is a fine balance between looking at life from the male point of view, while still being sympathetic to the female perspective. The inflection point was the thought in my mind that name Navara is of Japanese origin and means "defender". However, the name could also be of Portuguese origin, but I am sure the suits at Nissan would plump for the Inuit meaning for Navara, which is "God's bright light".

Chief suit from Nissan Africa, managing director Mike Whitfield, would definitely concur, and at the function he said that the company was committed to building on its 60-year heritage on the continent by bringing a vehicle made in Africa for Africa to Africa while working with governments who wanted to create their own sustainable automotive industries. The all new Navara has now created the beachhead, and shipping into Africa has begun, completing the latest milestone in a journey that began earlier in 2021 with the start of production for the vehicle in the company’s Africa’s LCV manufacturing hub in Rosslyn, outside Pretoria, in South Africa.

The vehicle, which is the toughest vehicle that Nissan has ever made, is packed with Nissan Intelligent Motoring features yet built to withstand severity level 56, an in-house metric which describes the most extreme driving conditions in the world – a standard which applies to many countries in the continent. “Africa is the last automotive frontier,” says Whitfield, “with a motorisation rate of 42 vehicles per 1 000 people, against the global average of 182. India with a similar population and GDP per capita sold 4.4-million vehicles in 2018, as against Africa’s 1.3-million. An African automotive industry could sell 5-million vehicles a year by 2050, but most of all could be the greatest catalyst for the implementation of the African Continental Free Trade Agreement, signed in January this year, which will create the largest trading bloc in the world.”

Nissan’s sales director for Sub Saharan Africa Hide Kuwayama agrees, saying that Nissan Africa is very excited about the progress of Ghana’s first ever Nissan assembly plant which will be the most modern and most advanced in West Africa when it goes into production early in 2022. “Sub Saharan Africa has four of the fastest growing economies in the world this year. The greatest challenge is the grey market, where 80% of the fleet of vehicles on the continent are imported second hand and are not designed for African conditions. Our all-new Nissan Navara, the best we have ever made, is literally built of more: it hasn’t just been tropicalised, it has a reinforced chassis, the suspension is different and the roll over angle is the best in the market.”

Nissan marketing director Stefan Haasbroek adds that the design of the all new Navara had focused on four pillars: rugged and tough, utterly capable; value for money with high levels of safety across all models; Nissan’s legendary smart technology; and, exceptional drive comfort. “We recognised that the Navara will be bought both by fleets and by individuals so this is a vehicle that is as useful working on the road during the week as it is for relaxing at the weekend. It was designed to appeal as much to the man on the building site as it is for the high-flying corporate mom doing the sports run with her kids and living her best life. It literally is built of more.”

My colleague, Howard Keeg, managed to wangle a test review of the new Nissan Navara, and he concurs with the prognosis of all three gentlemen, and he notes that the Navara is mobility for all seasons, and the proof of the pudding is that the Navara is loved both by the caveman and the cavewoman.