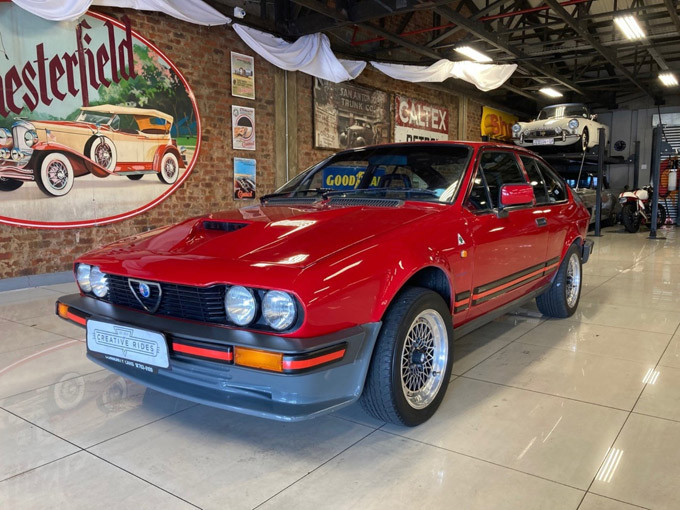 An international bidding battle for a 1980 Alfa GTV 6 3L that started at R200 000 and ended at R1.1 million rand was the nail-biting finale to the biggest vintage and classic car auction of the year in South Africa that drew a virtual global audience of 15 000 viewers.

“The star lot of the day was without doubt the Alfa GTV 6, which was also the last lot in a packed catalogue of some of the rarest collector cars I’ve ever seen.

“Lot 106 was a trans-Atlantic bidding war between collectors in Australia and South Africa and the bids climbed rapidly from R200 000, with the hammer eventually falling at R1.1m.

“The good news is this extremely rare 3L beast that was originally designed for the Group 1 local racing circuit is going to be staying in South Africa.”

After the Alfa, the next highest prices achieved on the day were:

Two other stand-out lots with fierce international bidding were for a 1958 Chevrolet Apache and a 1953 Mercedes Benz W186 Model 300 Adenauer, both of which achieved sale prices of R600 000.

“The remainder of the classic cars were bought by collectors in England, Australia, New Zealand, Zambia and Botswana, and we’ll be shipping those vehicles to their new owners in the next few weeks.

“Among the South African buyers, the majority were from Gauteng, with fairly strong representation from the Western Cape as well.

“Numerous bidders also made multiple purchases at the auction, with one very avid local collector snapping up eight cars for his private collection.

“Several buyers have indicated to us that their purchases this weekend will be going to private car museums across the country.”

Van Reenen notes that while strict Covid protocols limited attendance at the live sale to 150 bidders, scores more were bidding online throughout the day, while the 15 000-strong global audience of the live-stream broke last year’s viewing record by 3 000.

“The pre-sale online public interest in these cars also far exceeded the records set last year – by some 2 million views! By Saturday morning 3.5 million people had viewed the image carousel of the auction cars and watched the video.”

Van Reenen says a highlights reel of the auction will soon be available on the High Street Auctions social media channels.