50 shades of blue: an iconic colour in motion 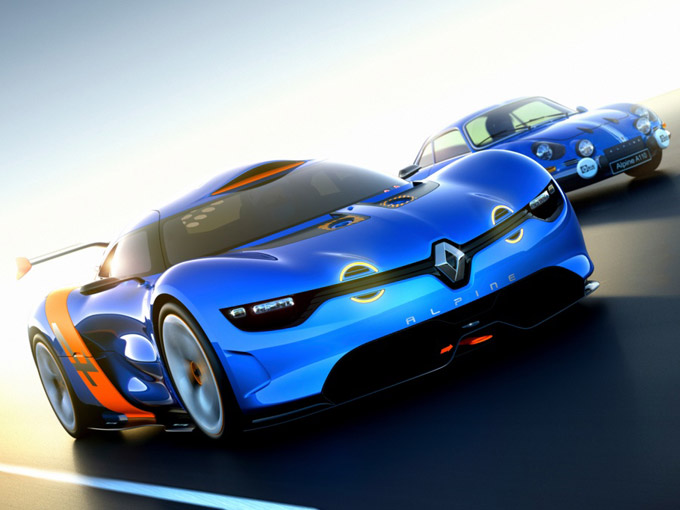 Close your eyes a moment and imagine you’re gazing at an Alpine! There’s every chance you will picture it in blue. In the collective subconscious, that is the colour most readily associated with Renault Group’s sports car brand as a result of its use for race, rally and road cars over a period of decades. But, as Design Director Antony Villain explains, there isn’t just one Alpine Blue…

Many motor enthusiasts have a mental picture of a blue Alpine Berlinette skipping nimbly through a rally stage. Indeed, the A110’s triumphs in the sport in the 1960s and 1970s made an indelible mark on generations of fans, fuelling a near-Pavlovian link between the trademark livery of those cars and the brand.

Here at Alpine, blue is seen as more than just a colour – it is a territory

Yet blue was by no means the finish of choice in the early days. When founder Jean Rédélé first presented his early production to the then-Renault CEO Pierre Dreyfus at the Régie’s headquarters near Paris in 1955, he showed up with one blue car, one white and a third in red.

Blue, but also white and red: the original colours of the Alpine cars are varied

It was only with the introduction of the A110 that the metallic blue that would go on to become a hallmark of the brand first appeared. The story goes that a customer had specified Panama Blue for his berlinette and that salesman Jacques Cheinisse – a keen rally driver who would later be enrolled as the make’s Sporting Director – was so taken by it that he chose the same finish for the A110 he ordered and took rallying at the beginning of 1963.

The option went viral and soon became the default livery of the make’s works berlinettes, thereby sparking a lasting, textbook association of colours. The decision also tied in neatly with the notion of French racing blue that was employed for many years in motorsport (along with red for Italy, green for Great Britain and white, then silver for Germany, etc.), in keeping with a tradition that survived in grand prix racing until 1967.

It was through motorsport that the blue colour became associated with the Alpine brand.

That said, Metallic Alpine Blue – long referred to as RE331 – was not the only blue that Alpine customers were able to specify, since the catalogue also listed Metallic Azur Blue, Metallic Acier Blue, Metallic Pacifique Blue and Metallic Estoril Blue as possibilities, amongst others.

“There was never really a single Alpine Blue,” observes Antony Villain. “Back in the day, there was also a variety of yellows and reds and oranges.” Interestingly, the colour of the last A110 to roll off the line at Alpine’s Dieppe plant in Normandy, in 1977, was a splendid Metallic Normand Green!

It was the French berlinette’s success in motorsport (along with the option’s attractive price!) that made metallic blue such a resounding hit with buyers. “In the 1980s, a considerable number of Alpines that weren’t originally blue were repainted by their owners,” smiles Antony Villain. In fact, there are more blue A110s around now than there were at the time, when metallic blue accounted for just 30 percent of orders!

In 2012, when Renault decided to celebrate the A110’s 50th anniversary in style in the form of the A110-50 concept car, metallic blue was the natural choice for its body colour. “It was hailed as the iconic Alpine Blue, but it was actually different,” says Antony Villain. “Then, when the Alpine brand was revived, one of our first missions was to come up with a livery for the Alpine prototype entered in endurance racing. We didn’t have much time and ended up opting for the same colour as the concept car, and we have continued to run it ever since.”

This blue continues to feature on the current A110 road cars, the Alpine Elf Matmut Endurance Team A480 and Alpine F1 Team’s A521. The latter, however, employs a specific, slightly lighter variation developed in conjunction with engineers at the Formula 1 team’s base in Enstone, England, with the aim of standing out more clearly against black racetrack surfaces and enhancing the legibility of sponsor visibility on the cars.

Shades of blue to come

Alpine’s Design Director and his team are not tied to this colour, however. They are free to be creative. “As designers, we look forward, into the future. While blue may be a cornerstone, it provides us with an infinite variety of shades. That’s what makes it so interesting. The challenge we face is to find new tints, new processes and new depths of hue in order to move with the times and as new technologies emerge.”

The future Alpine range could effectively spring a surprise or two when it comes to body colours...

There is no single "Alpine blue" but a whole range, always in evolution.