The road to the 'Olympics of Karting' starts here 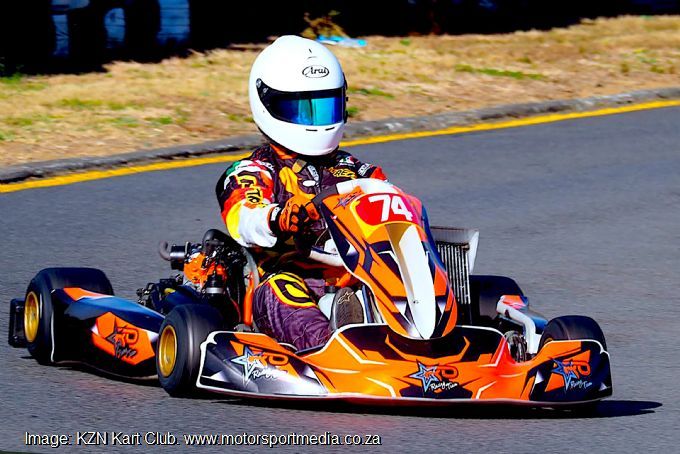 It’s time to light that blue touch paper, step five paces back and behold the action when karting’s Rotax Max Challenge 2021 kicks off with a cracking regional race at iDube near Camperdown in KZN on Sunday 7 February.

There is only one way to reach the ‘Olympics of Karting’ Rotax Max Grand Finals — in essence the Max World Title — and that is to win a South African or African championship first. And that all starts with KZN’s finest — and a handy troupe of out of town visitors rumbling the Thunderdome, as the picturesque and challenging hillside iDube track is popularly known.

Starting with the quickest, KZN champ Rob Whiting will have Jozi visitors, his Gauteng counterpart Jamie Smith, Niko Zafiris and Divan Braak to deal with, in the direct drive gearbox DD2s. And in DD2 Masters, Jonathan Pieterse will be up against the determined Alistair Mingay, Shane Foley, fast lady Beverly van Heerde, Stan Whiting, new boy on the block Allan Spies and the experienced Chris Grobbelaar.

DD2 will be a cracker in the nationals from early March. Multi SA champion Bradley Liebenberg is expected to take Jamie and brother Brandon Smith, Nick Verheul and the rest of the upcountry guys on. And expect fireworks in the Cape from next weekend too, as SA champ Seb Boyd races WP rivals, Umpie Swart, Jason Coetzee, Charl Visser, Joseph Oelz and others. Eugene Brittz, Philippe Chapat, Conor Hughes will be at it in National Masters too.

Then they all race together at the first of the four Rotax Max Nationals end March. Now that will be something to watch. And then some…

Excitement is tangible in the top chain drive Senior Max as several top KZN Juniors step up at iDube. Not least Troy Snyman, along with Juandre Nel and Louden Bamford. That should keep Senior regulars Riley Horner, Nick Wuite, Jack Rowe and Daniela Marzoppi and Odi Lee on their toes.

Max Masters is big in Natal and with champion Shane Foley moving up, expect Eric Marzoppi, Richard Horner and Richard van Heerde to fight that one out. And popular and entertaining as ever, Alan John Rice, James Stewart, Alan Johnston, Peter John Garbutt and Shaun Yeld will tussle in Masters Silver Cup this year.

Looking ahead at Senior Max in the other regions, expect SA Champion Tate Bishop, Jason Coetzee, brothers Charl and Kyle Visser and Andrew Rackstraw to be on the pace in the Cape, and Kian Grottis and Dane van Heerde among those to be on it in Gauteng. All of them racing together, is another great Rotax Max SA National prospect.

Troy Snyman should be the lad to beat in KZN under-15 Junior Max and Corben Spies and Nikheil Kulpersad plan to do just that. They're joined by upcountry wildcard Tyler Robinson and rookies Teja Govender and Maahir Wahab on Sunday. Reza Levy, Ethan Stier are set to stir up the WP Junior pot, while SA champ Muhammad Wally will chase the NR double with rookies Erich Heystek, Jayden Goose, Dhivyen Naidoo snapping at his heels.

In the primary school classes, Travis Yeld, Caleb Odendaal and Berlin Robinson will be the kids to beat in under-13 Micro Max in the KZN opener. Other names to keep an eye on as the seasons progress are Keagan Beaumont, Joaquim de Oliveira, Joshua Smit in the Cape and Mo Moerat, Erich Heystek and Caleb Odendaal in Gauteng.

KZN champ Travis Mingay will not only have rapid regular rivals Kyle Spies, Dylan Watkins and Keira Naidoo to deal with in under-11 Micro Max on Sunday, but also Bambino graduates Harry Rowe, Busani Sithole and Troy Pieterse. Add out of towners Christian Verheul, Mattao Masson, and Rafael da Silva for a cracking grid at iDube. Also look out for Aiden and Keagan Beaumont, Regie Mailula and Ruald Hartzenburg in the other regions.

Last but most definitely not least, the baby Bambinos, where KZN kids Troy Pieterse, Kaiden Pistauer and Kaiden Thaver are ready to do battle in the Zululand hills. They have a quartet of out of town rivals to keep them on their toes in the form of Mathew Shuttelworth, Rafael de Sousa and Santiago Frade. Another name to look out for this year is 2021 Max rookie Noah Cronje — he’s former Rotax Max World Champion Mark’s son.

The KZN Rotax Max season opener at iDube on Sunday 7 February will be followed by the first Cape round at Killarney on Saturday 13 February. The first Northern Regions round is at Benoni's Formula K raceway on Saturday 6 March, before the opening SA National round back at Killarney over the last weekend in March.

All of that counts toward the 2021 South African Rotax Max Challenge, which is what drivers must first win to qualify to take on the best Max karters in each class at the ‘Olympics of Karting’ international Rotax Max Grand Finals at the end of the year.