Only SA's best karters get to wear Max green and gold 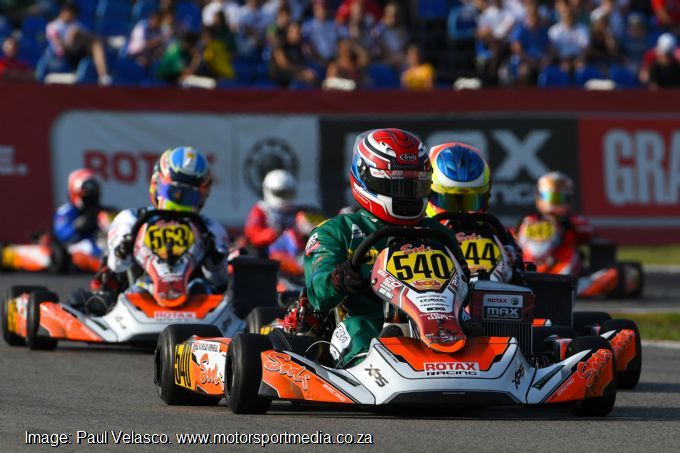 “A driver or a parent cannot just go out and buy a drive with a top team in the Grand Finals,” Rotax Max South Africa boss Ed Murray explains. “Unlike where money talks throughout motorsport, where some billionaire parents go to the extent of buying Formula 1 teams to further their kids’ careers, Rotax Max Karting remains true to its ideals.

“A driver must first win a National Rotax Max Championship, or win their class in the African Open in order to qualify to represent South Africa in the Grand Finals every year, Murray pointed out. “That’s the way it has always been and that’s the Rotax Max difference — we reward success, so only the very best are eligible to compete in our flagship event. ”It’s why they refer to the Grand Finals as the ‘Olympics of Karting’. Because only the very best drivers every year qualify to race there.”

So, in order for a racing kid to make the Rotax Max big time, they need to deliver an excellent year on track, beat the best karters in their class and age group in the country; win at regional and national level to clinch that championship. That is how they earn a treasured ticket to the Grand Finals. The Rotax Max year starts with a KZN regional at iDube this weekend, before the Cape Max karters get racing next week, and then the Northern Regions race from early March.

Four of each drivers’ best regional scores also count toward their Rotax Max Challenge tally. That mainly comprises their points scored in the four Nationals in Cape Town, at Benoni in Gauteng iDube in KZN and at the home of Rotax Max, the Zwartkops International Kart Circuit in Pretoria in October. Each National class champions is then invited to represent SA in the Grand Finals. The only other way in is to win the wildcard African Open, also at Zwartkops in August.

All eight Grand Final Rotax Max Challenge classes race in SA championships. It all starts with the kindergarten of karting, baby Bambinos for 5 to 9 year olds. Bambinos do not form part of Rotax Max per se, but from there, racing kids step up to seven to 11-year on Micro Max on bigger kid kart chassis with detuned but still tightly controlled and monitored 125cc watercooled 2-stroke Rotax Max engines. The SA Micro Max champion wins a ticket to the Grand Finals.

After two years in Micro, the next step is up to nine to 13 year old Mini Max, with similar, slightly more powerful engines in the same kid kart chassis. Like the rest, the Mini champion earns a seat in the South African Rotax Max Grand Final team. Once they turn 14, karting kids take a big step up to high school age group over-11 to under-15 Junior Max. Significantly faster and far more demanding to drive, full-sized chan-drive Junior chassis run powerful 125cc watercooled Rotax 2-stroke engines.

Even more powerful, open age group Senior Max is the top chain-drive class. Senior runs at a heavier minimum weight for its fourteen year or older driver and kart on the scales after the race. Senior Max karts are also used in Master Max for elder and ‘bigger-boned’ drivers at a yet higher minimum combination mass. All Rotax Max Classes run to strict weight limits, while tight technical and strict racing regulations ensure a level and fair playing field across the board.

DD2 is the premier Rotax Max karting class and the fastest of them all. These direct drive water-cooled 2-stroke machines have 2-speed gearboxes and direct drive and attract SA’s top race and kart drivers from their fifteenth year and older, to compete at the highest level. A second DD2 Masters class is the playground of SA’s top over-31 age karters.

“The Rotax Max Challenge has, and always will strive to deliver competitive, fair and attractive racing bound by strong and sensible rules in a clear and understandable structure that rewards driving excellence above all else,” Ed Murray concluded. “You can go all the way in Rotax Max karting, but you have to earn that glory, every step of the way.

“We now look forward to another great season, to crown our champions and to once again take the best possible green and gold South African Rotax Max team to the 'Olympics of Karting'!"