Ever dreamed of racing touring cars? now you can! 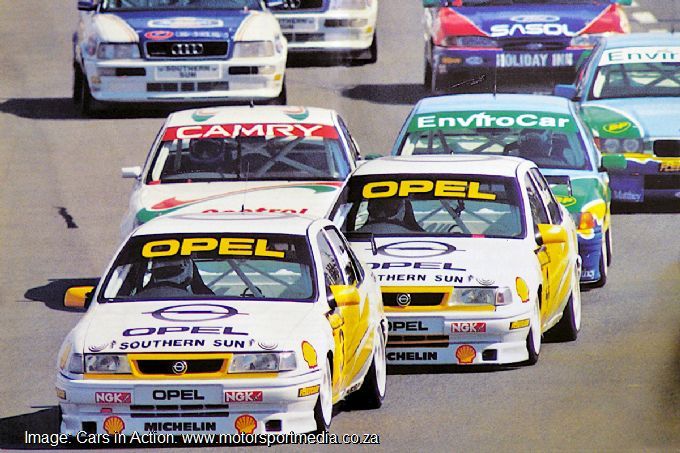 Historic Racing South Africa is abuzz on the news of the arrival of the new Youngtimers class as an experimental category for 2021 ahead of a step up to a regular championship class on the Historic Tour from 2022. HRSA Youngtimers will race in the spirit of the great South African Touring Car years, but rather than employing their exotic and expensive regulations, these cars will be built to rules that will ensure close, fun racing at a most attractive budget.

The brainchild of enigmatic HRSA chair Stewart McLarty, HRSA Youngtimers will cater for 2-litre or 1600cc front-wheel driven four-door saloon cars that were in production between 1 January 1987 and 31 December 1996. The class will run in a power to weight balanced formula as a low budget entry point to Historic Racing in South Africa.

Catering for the likes of the Nissan Sentras and Primeras, Opel Monzas and Astras, Audi A4s, Volkswagen Jettas, Toyota Corollas and Camrys, the Ford Telstar and Alfa Romeo 155, HRSA Youngtimers will also be open to other cars that fit into the regulations. They include the Honda Ballade, Ford Escort and Mazda Etude, Renault Megane, Hyundai Elantra and others considered eligible by the HRSA.

“Youngtimers will look like classic Touring Cars out on track, but they will actually cost a minute fortune of what those halcyon race cars did to build and run, thanks to simple production-based rules and greatly reduced modifications,” HRSA chairman Stewart McLarty explains. “They will have the visual allure of a pukka Touring Car but you will be able to build and race them for not much more than beer money and have a hell of a lot of fun doing it!”

Designed to deliver ultimate racing enjoyment, HRSA Youngtimers will compete in a half hour plus a lap format off a grid in reverse order of championship positions, with a compulsory pit stop. Driver changes will be encouraged to promote teams of two drivers to share the cost of developing and running their cars to make the racing even more affordable to the individuals. Single driver entries will suffer a five second penalty in their mandatory pit stops.

Until there are enough cars for HRSA Youngtimers to race alone, the series will start as a separate class behind the regular Pre-81 HRSA Saloons with co-drivers sharing a car, each driving a heat. Success ballast will be applied to the top three in each second race, with winners suffering a 15 kg dumbell bolted into their car, second 10 kg and third 5 kg, for the following race.

Youngtimers will be normally aspirated series production cars verified by a HRSA Technical Passport. In typical Touring Car style, they can use a same-make HRSA nominated engine and gearbox from that specific brand. The driveline will however remain completely standard and rivals with similar equipment will be able to claim a winning car’s engine by paying the cost of replacing the engine to the claimed engine’s existing owner plus a R5,000 HRSA fee.

An HRSA approved race unit may replace the original ECU, original exhaust manifolds remain, but an MSA noise-legal free-flow may replace the original pipe along the same route. Radiators are free in their original position and additional coolers are permitted within the bodywork. Brakes may be upgraded to the highest original specification and ABS is allowed if originally fitted. Youngtimers will race HRSA approved semi slick tyres on 14 and 15-inch wheels.

Bodywork remains completely standard, although an HRSA approved aftermarket rear wing may be fitted and rear and side window glass may be replaced with clear polycarbonate. No chassis modifications are allowed beyond braces fitted between the top strut mounts and bottom chassis legs, while fenders may be subtly rolled to cater for lowered suspensions.

The four doors, boot and bonnet must open and shut as normal and all lights and indicators must work. Standard interiors should be gutted, but the original dash must remain, although racing instruments may be fitted. Cars will be fitted with a full roll cage and MSA required safety equipment to ensure a genuine period Touring Car feel.

“Youngtimers are newer than traditional Historic Race Cars and they represent the fastest growing section of Historic Racing across Europe,” McLarty explains. “We had to South Africanise the concept to make it acceptable here, but it seems the class has been a hit with enthusiast racers from the get-go. “We are aware of six or seven cars already being built over and above our '95 Mazda Etude prototype build that is now well advanced too.

“The prototype will be running soon and we will use it to demonstrate the merits of the new HRSA Youngtimer concept to potential competitors, sponsors, and the media, among others, while fine tuning to specification and rules.  “There has been many a call to deliver a cheap and competitive racing formula in South Africa and HRSA has taken the initiative to fill that void, McLarty concluded. “We are most excited by the prospect of the HRSA Youngtimers!"