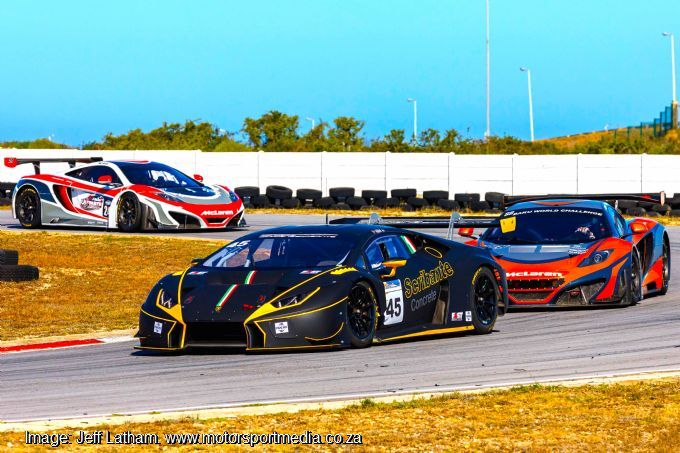 The second round of the Algoa Motorsport Club’s Eastern Province Championship races delivered some close and historic racing at the Aldo Scribante Racetrack on Saturday. Local entries were spiced up by out of town visitors and a significant one hour race that served to set Balance of Performance for SA’s all-new GT Racing Series.

Stephen then made off at the front with White and Arangies in hot pursuit, but White was first to stop and emerged ahead of Stephen. The veteran chased the youngster down, but Stewie kept Michael behind for a close 0.3 second victory. Charl Arangies had to pit twice for a puncture, but still raced home third ahead of Aldo Scribante’s Lamborghini and Sun Moodley's Porsche GT3 was fifth.

Local hero Silvio Scribante’s Lamborghini was running fourth but hit trouble when his Lamborghini's onboard jacks jammed in his stop, Xolile Letlaka had issues with his Lambo, Paul Hill’s Aston Martin had a clutch issue and Harry Arangies’ Porsche 911 GT3 Cup also ran into trouble. The new SAGTRA Series will run in a two one-hour race format alongside the SA Endurance Series starting at KZN’s Dezzi Raceway 10 April.

The visiting GT cars also added a little variety to the EP Modified races as Xolile Letlaka’s Lamborghini beat Sun Moodley’s Porsche to an easy first heat win. Behind them, it was business as usual as Deon Slabbert’s Class A Polo was the first local home ahead of a great dice between Class B winner Ian Riddle’s BMW and Quinsley Sale in a Class A Nissan 350Z.

Kelsey Davidson took Class D in her Polo in sixth from Steve High’s Class C Chevy Cruze and class rival Geoff Stephen’s Golf a lap down ahead of tenth man Philip Weise’s Class X BMW. A troubled Duncan Lethbridge was next up in his Class B Polo from Calvyn Ferreira’s Class X Golf and the Class E gang eased by Jeandre Marais’ Polo half a second clear of Daniel Bright’s Citi Golf.

High had the Audi sorted for race 2 as he and Slabbert put one over Moodley’s Porsche for the win. Sale was fourth from Class B, D, C and X  winners Riddle, Davidson, Steve High and Ferreira. Stephen was next up from Wiese, Class E winner Jeandre Marais, Phillips and E runners Boshoff and Forword. Njumbuxa did the Club proud when he beat Harri to the Class F win as Geyser ran into trouble and Bright retired.

Dylan Grobler was a busy lad in the Junior Motorcycle races as he beat Ethan Diener in all three Honda NSF100 races. Behind them encouraging AMSC Development duo Anikilitha Nombana and Thandolwethu Mphuthi entertained, as they diced the day away. Grobler then left Jessica Vermaak and Ethan Diener to play in the Honda CBR 150 races as William Kew and Michele Konig followed.

The third round of the Algoa Motorsport Club’s Eastern Province Championship happens at Aldo Scribante on Saturday 10 April.