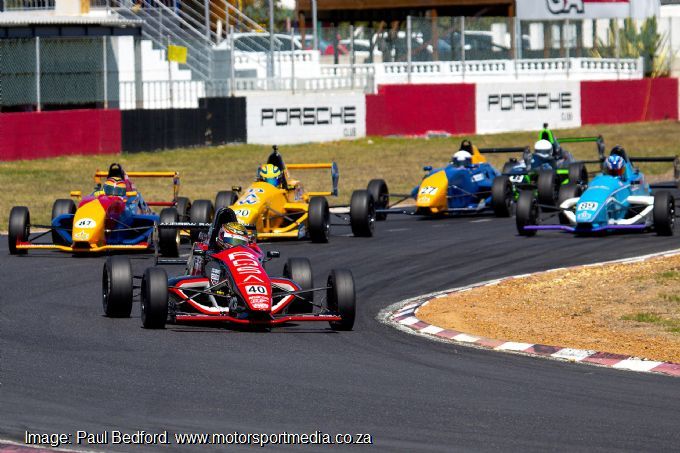 The opening round of the 2021 Investchem Formula 1600 championship at Killarney was all about one man. Cape Town local hero Andrew Rackstraw utterly dominated as he laid claim to the quarter-million rand champion's prize and test drives in a race winning Chemical Logistics Toyota Corolla GTC and a Formula Renault single seater at the end of the year.

Behind Rackstraw, young gun Jarrod Waberski starred to second overall ahead of Nicholas van Weely, who fought his way back to third after a challenging weekend. Ian Schofield had a remarkable weekend en route to a stunning double Formula Ford kent victory. The writing was on the wall from Friday morning as Rackstraw cemented his home advantage as he cantered to top the three practice sessions by over half a second each.

Behind them, Dean Venter topped the non-wings and slicks Formula Ford Kent grid in his Chamber LXXVII Mygale ahead of the effervescent Ian Schofield's Investchem Mygale, Graham Hepburn’s Qualipak JHB Van Diemen, Allen Meyer in an Investchem van Diemen, and the rest.

The Cape Southeaster was blowing and Killarney dusty as Rackstraw blasted off pole position to lead the way. Van Weely used all of his experience to bounce the three rookies ahead of him off the line and move into second to fill his local rivals’ mirrors. Waberski sat third from le Roux, Vos, Holtzhausen, who soon passed Vos, Andrew Schofied and Tracey.

Behind them, Hepburn did not start in the Kents, while Ian Schofield went off in a dusty incident inside Turn 4 after contact with Venter, who stopped early. There was a little chaos as the F1600 pack arrived back at T4 in the dust and wind, but they managed to get through with van Weely all over the back of Rackstraw. But Ian Schofield and old man Ronald van Weely went off as the Kents arrived.

Rackstraw was under pressure from van Weely up front with Waberski and debutant le Roux in close attendance until a slower Kent car saw Waberski and le Roux drop back. Then van Weely went off at Turn 5 to gift Waberski, Le Roux, Holtzhausen and Vos second, third, fourth and fifth. Holtzhausen jumped le Roux with a lap to go for third behind the flying Rackstraw and Wabeski and ahead of le Roux, Vos, van Weely, Andrew Schofield and Tracey.

The second race was a far more straightforward affair as Rackstraw led away and Waberski slotted into second ahead of van Weely, who delivered another lightning start. It took the wily van Weely a lap to pass the resilient youngster, by which time Rackstraw was long gone. Behind them, front row starter Holtzhausen sat fourth from Vos, le Roux, Andrew Schofield and Tracey, but Holtzhausen stopped with two laps left to race.

All of which meant that the dominant Andrew Rackstraw took a full points haul away from his home race with pole position, two race wins and two fastest laps too, let alone the overall win over an impressive Jarrod Waberski. Nicholas van Weely clambered back to third overall from top rookie Josh le Roux a fine fourth on his Investchem Formula 1600 debut, Alex Vos, Andrew Schofield, Brendan Tracey and the also impressive Ewan Holtzhausen.

Ian Schofield’s Kent win was perhaps even more impressive, considering his come from behind act in race 1 to take the day from Allen Meyer, Jeff Gable, Graham Vos and Steve Venter.

Now attention shifts to the rest of the field’s home track at Zwartkops in Pretoria on 17 April. Will Andrew Rackstraw continue to dominate there, or will the locals make good…?