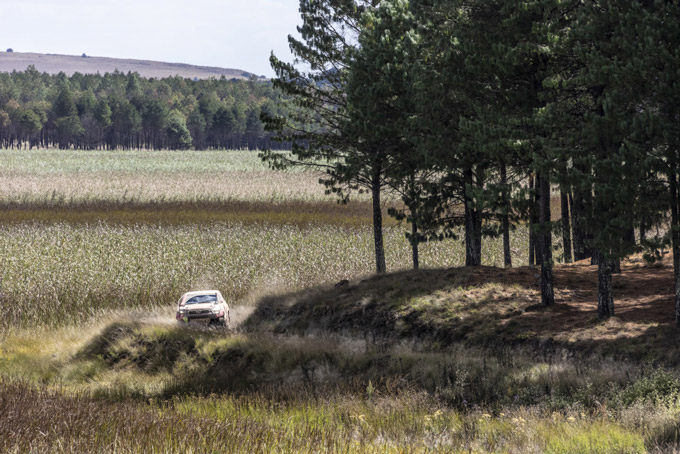 The opening round of the 2021 South African Cross-Country Series (SACCS) took place in the area around Dullstroom on 26 and 27 March, and saw Guy Botterill record a solid second place in his first national cross-country race. The TOYOTA GAZOO Racing SA driver is a multiple national rally champion, but he filled in for defending champion Henk Lategan, who was sidelined after his crash at the Dakar Rally earlier this year.

Botterill was partnered with navigator Brett Cummings for the race, and the pair set about their task with determination, despite posting only the 10th-fastest time in the qualifying race, which took place on the Friday of the race weekend. The Class FIA Toyota Hilux is very different from the rally car that Botterill usually drives, but the Natalian took to the big cross-country vehicle like a duck to water, though he found the wet track conditions challenging.

“There’s probably a lot more to learn about the Hilux,” said Botterill after the qualifying race. “But I didn’t feel completely out of place behind the wheel. To me, the biggest differences are the height off the ground, as well as the car’s ability to deal with rough terrain.”

Once the flag dropped for the main race, Botterill / Cummings made the most of the opportunity, and quickly climbed up the standings. They powered into second place overall by the end of Day 1, completing the first of three race loops in the innovative race format used at the Mpumalanga 400.

“Going to bed in second place, not even two minutes behind the race leader, was very exciting,” said Botterill. “The prospect of fighting for the lead over the final two race loops was very appealing, and we couldn’t wait to get back in the car.”

Day 2 of the race saw the Toyota Hilux pairing in the thick of the fight, until a navigational slip saw them tumble down the order.

“There was a hairpin marked on the road book, but the distances between the book, the GPS and the markers didn’t make sense. We turned too late, and lost the best part of six minutes hunting for the route,” explained Botterill.

This pushed them down in the overall standings, but the rally driver managed to maintain a highly competitive pace, and he fought hard to make up time. In the end, Botterill / Cummings finished second in Class FIA, some six minutes behind the Ford Ranger of Lance Woolridge and Elvene Vonk.

“Of course, we are disappointed having lost the time due to navigation – exactly the amount of time we finished behind the winners in the end,” said Botterill. “But even so, I’m delighted with a second place during my national cross-country debut.”

The weekend saw Giniel de Villiers, now reunited with Dennis Murphy, set the second-fastest time in the qualifying race, only to lose significant time due to power steering problems early in the first race loop, on the Friday of the race weekend. The man from Stellenbosch fought back on Saturday’s first race loop, steadily climbing up the standings before a puncture put paid to his charge. De Villiers / Murphy finished fifth in the end, after a challenging weekend in Dullstroom.

Things were even more challenging for Shameer Variawa and stand-in navigator Danie Stassen. The pair started the race cautiously, posting the sixth-fastest time in qualifying as they got used to each other in the car. Disaster struck on the first race loop, however, when their Toyota Hilux made contact with a rock hidden in deep muddy ruts.

“There was no warning at all,” said Variawa of the incident. “The one moment we were racing flat out, the next we were looking up at the sky after a massive impact on the bash plate.”

The car stayed on all fours, and Variawa drove to the end of the loop in pain – the impact had damaged the lower part of his back, and he had to undergo x-ray examinations before continuing on the Saturday.

“I was still in some discomfort when we started the race on Saturday, but the team managed to repair the car overnight, and Danie and I decided to go racing,” said Variawa.

The pair set a competitive pace despite Variawa’s discomfort, but their race was curtailed with a clutch problem mid-way through the afternoon’s racing sections.

“Overall, it was a tough day at the office for us,” said TOYOTA GAZOO Racing SA Team Principal, Glyn Hall, after the race. “We had high hopes for Giniel and Dennis, especially after a strong qualifying result. But the power steering problem put paid to their chances. Shameer showed true grit and determination to continue racing despite Friday’s impact, only to be let down by a clutch issue near the end of the race. Guy and Brett did us proud by flying the flag on Guy’s national debut, and even though they lost out on victory, we are very pleased with their second-place finish.”

At the same time, brothers Johan and Werner Horn showed their class by dominating the race in Class T. The Malalane Toyota Hilux campaigned by the brothers is one of the older cars in the field, but despite this they proceeded to qualify as the top Class T competitors and held onto that position until the end of the race. Not only that, but they recorded the third-fastest time across all categories, putting nearly 20 minutes between themselves and the next Class T crew at the finish.

The next round of the 2021 SACCS is the Sugarbelt 400 – a race that hasn’t featured on the calendar for a number of years. The crews will return to the sugarcane fields and forests around the KwaZulu-Natal town of Eston on 21 and 22 May, and TOYOTA GAZOO Racing SA will be hoping to bag more valuable points at Round 2.