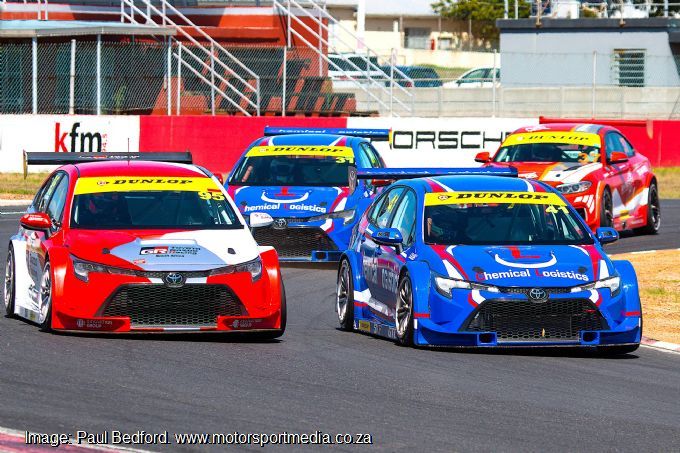 Investchem Racing heads to Zwartkops with two of its Global Touring Car drivers on top in the title chase and the third man tied in fourth as the series descends on Pretoria fully intent on delivering the race of the day at Saturday 17 April's second round Extreme Festival races.

“It’s great to have picked up the overall winner’s trophy and to be leading the championship at this early stage,” Robert Wolk admitted. “But it's a touch frustrating not to have won a race in the Cape! “I plan to address that this weekend, but I am certainly relishing another brilliant couple of Global Touring Car Races at the tight, twisty and exciting Zwartkops.”

“To have scored my maiden GTC win at my home track was a dream come true,” Julian van der Watt confirmed. “My Europerformance Race Driver SA Ford Focus also delivered beyond expectation and I was able to dominate the reverse-grid second race at Killarney — now we need to see how the build-up goes up in Pretoria before planning our strategy for the races — bring it on!”

Investchem Racing’s third former Formula 1600 champion Scott Temple is also relishing the Zwartkops races. “It was so close at Killarney that anyone could have won,” Scott pointed out. “It will probably be the same this weekend so it’s all about tactics and to plan where to be when the chequered flag falls. “On behalf of the whole team, we’d like to thank Investchem Racing's Ian Schofield for his incredible contribution to this great class!"

“We are delighted with progress in Global Touring Cars so far this year” Investchem Racing boss Ian Schofield concluded. “Cape Town was incredible — all the cars were still in the same camera shot in a great show and all six cars finished both races. “Toyota is building a new spec Corolla with the latest chassis and wiring loom for Mandla and Gazoo Racing has now committed for another two years. Another pair of twin cars are undergoing a total transformation to once again star on the GTC grid — watch for news on that soon!

“As far as our cars are concerned, all we need is for the lads to keep on delivering as they are — Stuart Thompson and the WCT team are doing a fantastic job behind the scenes and we are confident that all the effort we have put into transforming GTC is going to pay great dividends."