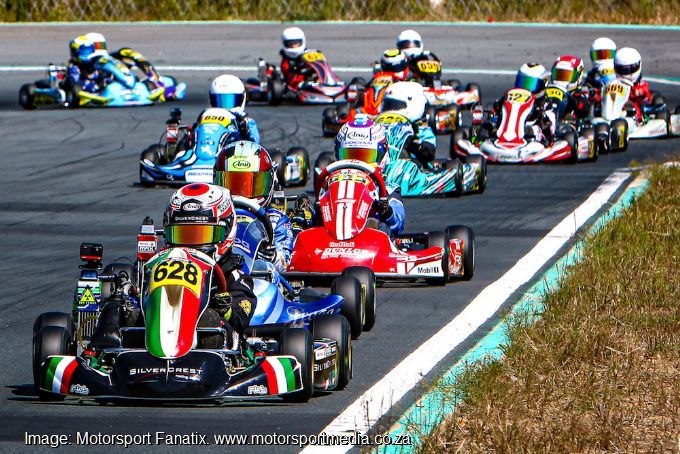 The Gauteng Rotax Max Challenge returns to home ground when the region’s top kart racers gather for the third round of the series at Zwartkops on Saturday 8 March. Not that the racing should be any less spectacular but this and the previous rounds swapped venues with the Formula K raceway in Benoni, which also hosted the second national round where the locals shone last weekend. So the allure to prove who’s who among Gauteng’s top dogs are will be as fierce as ever….

Brandon Smith arrives at the recently upgraded figure of 8 Zwartkops International Kart track as the premier direct drive gearbox kart DD2 favourite. Not only did he beat Nicolas Spanoyannis to take the day in the regionals last time out, but Brandon was also right in the thick of the national action last week. Both men will have to deal with Jamie Smith, Niko Zafiris, Divan Braak and Ian Allnutt, but also DD2 Masters frontrunners Eugene Brittz, Nick Verheul, Phillipe Chapat and the rest.

Kian Grottis will no doubt be the man to beat after ruffling the Senior Max feathers at the national last week. He will however have Hamza Jassat and and Tahier Ramlall, Tyrone Sterne, Roshaan Goodman, Olerato Sekudu, Ryan Wustmann and Andrew Hill chasing hard to make an impression there.

Another poser is whether surprise Formula K national winner Jayden Goosen will be out among the regional under-15 Junior Max field. So being, he will have SA champion and leader in both ’21 title races Muhammad Wally to deal with. Arch rival Troy Snyman often makes the trip up from KZN to race the upcountry regionals too, where Moosa Kajee is capable of surprising and Karabo Malemela, Ricardo Tebbutt and Nicolaos Vostanis will all be keen to make a point.

Wian Boshoff has been untouchable in both the Gauteng and national Mini Max under-13 races of late and thus has a sizeable target on his back. Caleb Odendaal, Erich Heystek, Kent Swartz, Georgia Lenaerts and Berlin Robinson will be among those taking aim.

Spice Mailula is the kid to beat in under-11 Micro Max in 2021, but both he and Kegan Martin will be keen on incident free weekends following their sizeable crash last time they chased the same piece of regional tarmac. Don’t ignore Mattao Mason who picked up the pieces ofter that incident, Rafael da Silva, Taylin Patel and Aadam Kajee there, either

Matthew Shuttleworth is riding the crest of the baby Bambino wave right now, but that’s no guarantee he will end up on top among the karting kindergarten this weekend. Logan Billau, Rafael de Sousa and Maddox Mason are all right on the pace there and Kayde Cornofsky, Diego Antunes, Santiago Frade, Shayaan Mohamed, Brodi Cooper Dowling and Bophelo Molatlhegi will be keen on a piece of that action, too.

Spectators were still banned from the races and all sporting events at the time of writing. Many hope that will change soon.