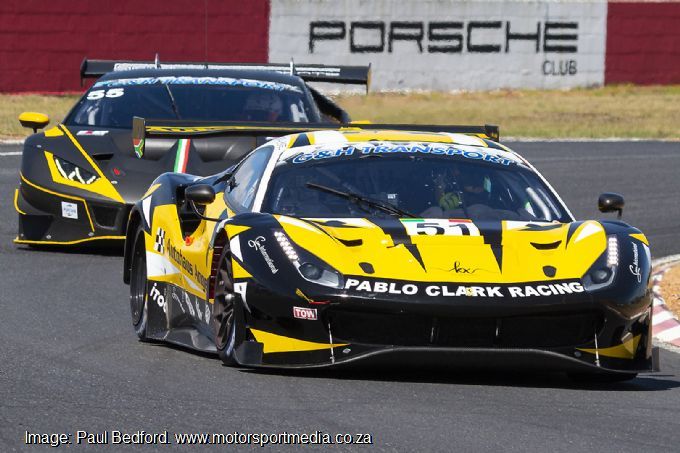 The South African GT Challenge returns to Phakisa when the G&H Extreme Supercars race alongside the annual Phakisa 200, the Volkswagen challenge, Formula Vee and Mobil V8s in Welkom on Saturday 15 May. Tyre wear concerns at the Free State racetrack will see race distances slightly reduced to a couple of 12 lap sprints, but if the season opener in the Cape was anything to go by, fans expect no shortage of on track action.

Marcel Angel heads up from the Cape to defend his lead in the Balance of Performance National GT class in the Autohaus Angel Ferrari 488 GT3. The Jozi-based Pablo Clark Racing-prepared machine will have the Giannoccaro brothers Gianni and Ricardo’s G&H Transport Lamborghini Gallardos, Marius Jackson in his Megafibre Audi R8 and series chairman Mark du Toit’s Trans Africa Racing Ferrari 430 GT3 to keep him honest.

Overall victory is likely to be another matter however, on the tight, twisty and abrasive Phakisa Freeway. Charl Arangies arrives as the G&H Extreme Supercars points leader following a dominant albeit lucky triple victory at Killarney. Arangies and his Stradale Into Africa Lamborghini Huracan will be particularly keen to consolidate that advantage in the absence of Franco Scribante. His mighty Porsche is still being repaired following a monumental Cape Town crash.

Dayne Angel and his Autohaus Angel Porsche GT2 will be out for an overall win in Welkom. He’s keen to avenge losing the final race win to a jumped start penalty down in Killarney. He will have his work cut out though, not just by Arangies, but also his Stradale teammates Xolile Letlaka driving an Into Africa McLaren this weekend, and Ant Blunden’s Sajco GSP Porsche 997.

A little further back, series newcomer Richard Pott adds a little variety with his Lotus Exige. He’s in for a baptism of fire as he goes up against veteran Ben Morgenrood’s wild Lexus GT, the Loureiro brothers Rick and Paulo's BMW 335s and Jonathan du Toit’s Ferrari 430. And expect a tight Class D battle between historic refugees Richard de Roos and Stefan Snyders’ classic Porsche Carrera RSRs and pair of Trans Africa Racing BMW Z4M Coupés, amongst others.

Spectators remain banned from racetracks as part of lockdown protocol, but the entire Phakisa race day will be live streamed. Find it on the youtube and also at the Extreme Festival facebook page all day Saturday.