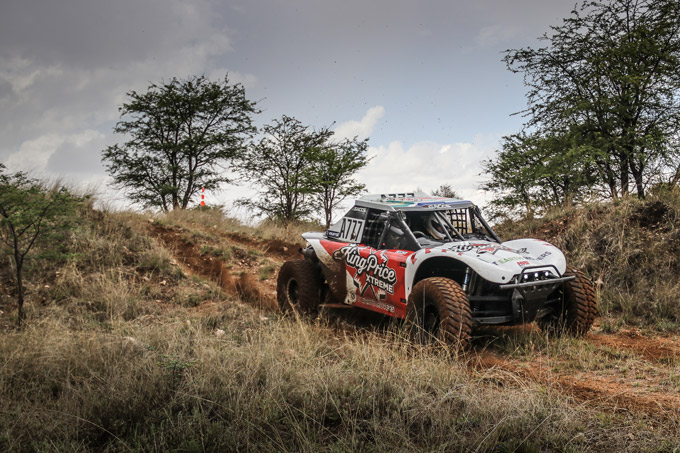 The field in the Special Vehicle Category of the 2021 South African National Cross Country Series (SACCS) might have been relatively small this year, but it delivered exciting racing in both the Class A and Class G Championships, and although the main titles have found new owners, the order in the runner up standings could still change after the final flag drops at the Toyota Gazoo Racing SA Parys 400.

With six of the seven races of the SACCS done and dusted, the upcoming TGRSA Parys 400 will form the seventh and final round of an exhilarating season, and the final chance for competitors to add points to their tally to confirm or better their standings.

As in 2019, the overall and Class A championship titles again went to Lance Trethewey and Adriaan Roets (King Price Xtreme BAT) who bagged the honours with two rounds to spare. In the Overall Drivers’ Championship, Trethewey has earned 183 points, 88 points clear of second-placed Cecil Larney (95 points) who is also leading the Class G championship for Side-by-Side vehicles where teams are competing with the Can-Am Maverick SxS.

The season has been a baptism of fire for the Larney brothers, Cecil and Elardus, but they persevered and scored points after each event, like Trethewey/Roets. Larney, however, is not out of the woods yet as Trethewey’s team-mate, Boela Botes (Porter) is currently third (86 points) after winning the recent Vryburg 400. Clint Gibson (Dirt Sport Stryker) missed the last three events and is fourth (60 points), and if he skips the Parys 400 and Bazil Bezuidenhout (55 points) scores points, the latter, who is the second Class G driver in the overall standings, is in with a chance to overtake him.

Bezuidenhout is followed by two more Class G drivers, Dean Bradbury (47 points) and youngster Kent Rutherford (32 points). The rest of the top ten drivers consists of John Thomson (31 points) in eighth place; Lood du Preez (Farmers Meat Stryker) in ninth with 30 points and Nico du Rand with 28 points while Geoff Minnitt (Class G) is 11th and one point behind Du Rand. Bradbury, Thomson and Du Rand have only competed in selected events and the second half of the top ten can look totally different depending on the participation and results of teams at Parys.

In the Overall Navigators’ Championship, Elardus Larney and Jay Pretorius, who sits next to Botes, have secured their podium positions, but only nine points separate second-placed Larney from Pretorius and the pressure will be on. Reigning champion Rikus Hattingh navigated for both Bazil and his father Coenie Bezuidenhout at the season opener in Mpumalanga is fourth (67 points).  Gibson’s regular co-pilot Alaric Smith is only seven points adrift in fifth place. Bradbury’s navigator, Timmy Botes (47 points) is sixth with Thomson’s navigator, Maurice Zermatten (31 points) seventh, one point ahead and the target of Tiaan Swart (30 points) who reads the notes for Du Preez.

Du Rand’s navigator, JG Claassen, is ninth (28 points) with Gerhard Snyman, who sits next to Minnitt, 10th (27 points) well poised to move up a few places if the team can finish and score points at the season finale in the Free State.

In the Class Championships teams are awarded five points for starting a race, and this combined with irregular participation and the musical chairs situation where drivers made use of various navigators, the standings look somewhat different and teams will be under pressure at the final event as nominal points separate competitors in the standings.

In the Class A Drivers’ Championship, Botes (98 points) could keep his runner-up position if the outgoing champion Tim Howes (81 points), who only competed in the first three events of the season, does not challenge him. Gibson is fourth (75 points) and a final good set of points could put him on the podium while Du Preez (62 points) rounds off the top five.

It was not the best of seasons for Sandra Labuschagne-Jonck (Moto-Netix KEC Racing). She is sixth (30 points) followed by Nic Pienaar (20 points) who competed in his first national event at Vryburg.

In the Class A Navigators’ Championship, Roets (186 points) leads Pretorius (98 points) with Smith (75 points) third. The standings are as close and on the same seesaw as their drivers with Swart (62 points) fourth and in with a chance of finishing on the podium pending their result and the participation of Gibson/Smith. Howes’ navigator, Don Thomson, is currently fifth (45 points).

Zermatten (41 points) is sixth; Sandra’s husband, Jaco, is seventh (30 points) and Carl Swanepoel, who partnered with Pienaar, is eighth (20 points).

Cecil Larney has secured the Class G Drivers’ Championship title with 159 points. Behind him, Bezuidenhout (91 points) is second with Rutherford (79 points) third, but both will be under pressure to perform to keep their positions with Rutherford still in with a chance to finish the season as the runner-up. Bradbury (77 points) is fourth and his participation could throw a spanner in the works while Minnitt (60 points) is fifth.

Things are looking slightly different in the Class G Navigators’ Championship where the podium has been set with Hattingh claiming the second spot (111 points) and Timmy Botes (77 points) third. Claassen (52 points) is fourth with Snyman (50 points) fifth and also in with a chance to better his position.

Behind Snyman, Werner’s brother and navigator, Leon and Rutherford’s regular navigator, Kabelo Mokanyane have both accumulated 43 points while Justin Rutherford, who sat next to his brother at the TGRSA 1000 Desert Race scored 36 points, is eighth. Erasmus’ navigator, Edward Odendaal, is ninth (15 points) and Himmel’s navigator, Francois Schoonbee, is 10th (10 points).

The TGRSA Parys 400 takes place on 20 November from the Parys Airfield in the Free State.