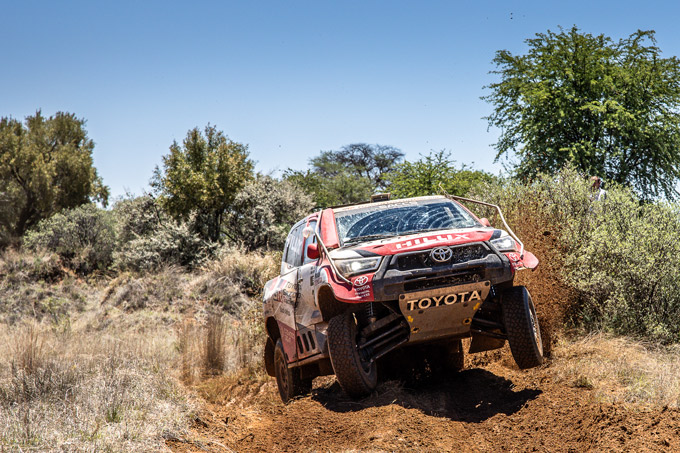 With six rounds of the 2021 South African National Cross Country Series (SACCS) now almost something of the past, the seventh and final event will be the Production Vehicle Championship title decider and with no breathing space between the frontrunners, the Toyota Gazoo Racing SA Parys 400 promises to be a nail-biting race from start to finish.

Four different teams claimed an overall victory during the season and betting on a winner for the final event, the TGRSA Parys 400 that takes place on 20 November in the Free State, will not be a wise decision.  Although the Class T Drivers’ and Navigators’ Championship titles as well as the Overall and FIA Class Navigators’ championships have been secured, the rest of the titles still needs owners while the overall standings and the standings in the various classes could look different when the dust has settled.

Three drivers are in the running for the Overall Drivers’ Championship title. A total of 30 points are up for grabs with only 28 points separating the defending champion and leader, Henk Lategan (Toyota Gazoo Racing SA Hilux) 138 points from Lance Woolridge (Ford Castrol Cross Country Racing Ranger) in second with 124 points and third-placed Brian Baragwanath (Century Racing CR6) who has accumulated 110 points. Lategan and Woolridge have both won twice this season with Baragwanath scoring 45 points when he won the TGRSA 1000 Desert Race in Upington.

And while they will battle it out at the front, Chris Visser (Toyota) and Gareth Woolridge (Ford Castrol Cross Country Racing Ranger) will bang bars for fourth place as they are on equal points (77).  Giniel de Villiers (Toyota Gazoo Racing SA Hilux) claimed the Sugarbelt 400 victory 20 years after winning it for the first time in 2001. He is currently fifth, but does not score points towards the championships as the team prepare for the upcoming Dakar Rally and are testing the prototype Toyota Hilux T1+. This means Johan Horn (Malalane Toyota) who is the leading Class T driver on the overall standings, can still work his way into the top five as he needs 14 points to overtake De Villiers.

In the Overall Navigators’ Championship, Brett Cummings (Toyota Gazoo Racing SA Hilux) has successfully defended his title. Cummings read the notes for stand-in driver, Guy Botterill, at the season opener when Lategan was recovering from a shoulder operation. With 156 points, Cummings is clear of second-placed Elvéne Vonk (124 points) who sits next to Lance Woolridge. Vonk is, however, not safe as Leonard Cremer (110 points), who has been reading the notes for Baragwanath from the second event, is close enough to overtake her if Woolridge/Vonk put a wheel wrong.

Boyd Dreyer, Gareth’s navigator, is currently fourth (77 points) with Albertus Venter, who has teamed up with Visser for the last four races, only 12 points behind in fifth place. And as De Villiers’ navigator, Dennis Murphy, will also not be adding more points to his 64, Werner Horn (51 points) stands a chance to pass him and can even get to Venter if things fell apart for Visser/Venter.

In the various class championships, competitors earn an additional five points for starting a race and the standings are looking somewhat different compared to the overall standings.

In the FIA Class Drivers’ Championship, Lategan (163 points) still leads Lance Woolridge (154 points) with Baragwanath (143 points) in third place. There is, however, no breathing space between these three who cannot afford to put a foot wrong in the Free State. Gareth Woolridge (111 points) is fourth, but multiple champion Visser (105 points) could catch him. Ernest Roberts/Henry Köhne (Century Racing CR6) changed their weapon of choice for the 2022 Dakar Rally during the season and could not complete the recent Vryburg 400. Roberts is sixth amongst the FIA Class drivers (85 points) followed by De Villiers (81).

Eben Basson (Red-Lined Motorsport VK56) needs eight points to overtake De Villiers, but will be hounded by Johan van Staden (Moto-Netix KEC Racing) who trails him by a single point after earning points after each of the six events. Shameer Variawa (Toyota Gazoo Racing SA Hilux) could not finish two races and finds himself in 10th place (69 points) with an opportunity to move up a place or two if he can gather more good points.

Variawa could also lose a position or two as Dewald van Breda (Century Racing CR6) is only one point behind after a consistent season while Philip Botha (Red-Lined Motorsport) is 12th (65 points). Basson and navigator, Gerhard Schutte, will also be looking for more points, and to keep up their impeccable performance this season.

The FIA Class Navigators’ Championship title has also been wrapped up and belongs to Cummings (191 points) with Vonk (154 points) and Cremer (138 points) safely on the podium although a mishap for Vonk could mean a runner-up result for Cremer. Dreyer (111 points) is fairly safe in fourth place while Köhne and Venter both have 85 points and the battle will be on for the final spot in the top five. Murphy (81 points) is currently seventh, but Schutte (74 points) and Sean van Staden (73 points), who navigates for dad Johan, could overtake him. He can also drop out of the top 10 if Variawa/Danie Stassen produce the goods giving Stassen enough points to add to his 69.

Rose and navigator Arno Olivier are the only team in the top four who have not yet won this year. The outgoing champions, Johan and Werner Horn, have won three events, but could not finish two. Johan is fourth between the Class T drivers (135 points), but a good haul could see him finish on the podium.

In the Class T Navigators’ Championship, Olivier (138 points) is second, two points ahead of Prinsloo’s navigator, André Vermeulen (136 points) and eight points ahead of Werner Horn (130 points) who missed the TGRSA 1000 Desert Race. A nail-biting battle for the final two podium positions, is looming. Rubuluza’s navigator, Fanifani Meyiwa, is fifth (85 points) with Jan-Harm Hugo, who partnered with Johnstone for four events, sixth (80 points). Vince Van Allemann, who shares the cockpit with Dylan Venter, is seventh (72 points).