Alpine snatches a high-flying podium to conclude the season 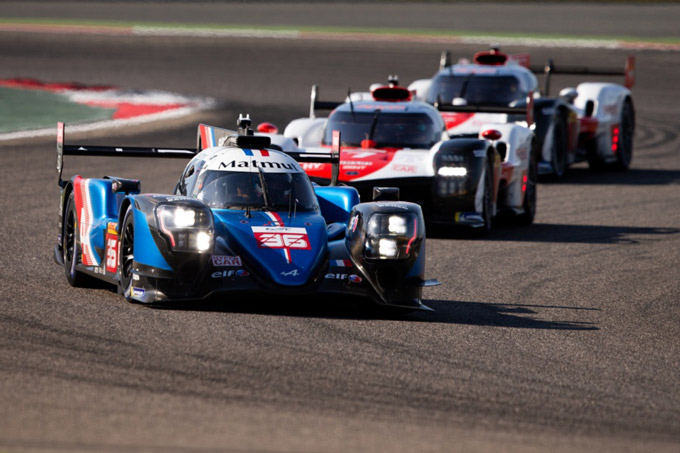 Just five days after the first race at the Bahrain International Circuit, the FIA WEC returned to the same track for the 2021 season-finale.

Thanks to the lessons learned the previous week, the team put its knowledge to good use during the three free practice sessions. Matthieu Vaxiviere then confirmed the progress made by setting the third-fastest time in qualifying, with a reduced gap to the pole position compared to last Friday.

Nicolas Lapierre, who was in the car for the start on Saturday, made a perfect getaway, overtaking the two Toyotas in the opening corners. The Frenchman dominated the first quarter of an hour before his rivals had an easier time with the back-marker traffic on lap nine. Not about to throw in the towel, Nicolas Lapierre kept the leaders in sight, but a mechanical issue with the diff shift forced him into the pits.

The Alpine Elf Matmut Endurance Team mechanics then carried out a lightning-quick intervention of only seven minutes to get the A480 back on track with Matthieu Vaxiviere. The French driver found himself shotgun on the field, nearly five laps behind the leaders, but engaged in a race against the clock to get back to the sharp end of the field. After clearing the GTE Am contingent, he handed over to André Negrao, who attacked the GTE Pro and LMP2 cars as night gradually set in.

Despite his efforts being slowed by an increasing number of full course yellows, the Brazilian drove a double stint, as did Matthieu Vaxiviere after him. Back behind the wheel, André Negrao rejoined the top five with two hours and fifteen minutes to go before Nicolas Lapierre got back in the car for the final sprint.

Coming out of the pits in seventh place, Nicolas Lapierre showed as much flair as his teammates, putting the n°36 Alpine back into the top three. After a final pit-stop, the Frenchman resumed his march forward to secure third place with twenty-three minutes to go.

With six podium results in as many races, Alpine Elf Matmut Endurance Team finishes its maiden campaign in the FIA WEC premier class in second place in the teams championship. Mathieu Vaxiviere, André Negrão and Nicolas Lapierre are third in the drivers championship.

Tomorrow, Les Bleus will conduct a day of testing with Nicolas Lapierre in the A480. The 2022 FIA World Endurance Championship season will kick off at Sebring, USA, where the Prologue (March 12-13) will precede the 1000 Miles of Sebring (March 18).

"We started the race strong with Nicolas, but the scenario took a new twist as we encountered our first and only reliability issue of the season. After losing only seven minutes in the garage, thanks to the great work of our mechanics, we set ourselves the goal of continuing our podium streak as third place was still within our reach. We kept pushing, but we also know it would have been difficult to do better anyway. We all have to rethink our approach to be more competitive in the future. Above all, I want to highlight that the team has taken a step forward in all areas this season, laying solid foundations for the future. I want to thank them for their work and congratulate them on their first Hypercar campaign."

"Reliability had been impeccable all year, but we had a small issue today. We would have preferred a clean sheet, but the team did another great job and rose to the challenge, which is great for the first season in the premier class. We can be proud that we gave it our all, and hopefully, we can get into the fight a bit more and really be challenging for wins next year."

"It was intense. After Nicolas' excellent start, everything changed with our diff shift issue and we had to push right to the finish to score another podium. We managed to get back to third place. It was a great year for the whole team. We've had our ups and downs, but we've learned a lot for the future, and I'm very happy about that."

"This race allowed us to pressure our rivals from the start, and we would have liked it to last a little longer. We were able to show some positive things despite our mechanical problem; the speed with which the team fixed the car was remarkable. We have gained experience throughout this first season in Hypercar. I'm confident we'll be ready to fight for the win when we hold all the keys."