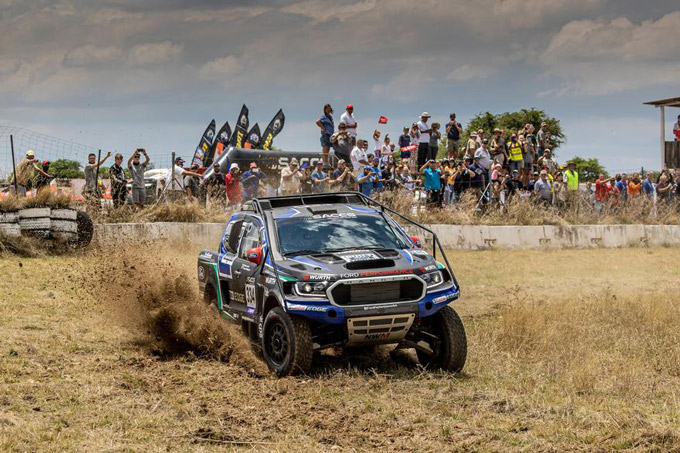 In what has been one of the most exciting and hotly contested seasons in the South African Cross Country Series (SACCS) for many years, the championship battle will go down to the final race of the season on Saturday 20 November 2021.

The event will once again be held in the Free State town of Parys, billed as the Toyota Gazoo Racing SA Parys 400. This year it will be a one-day race, with a short qualifying sprint in the morning to determine the starting order for the two race loops.

It will be a nail-biting affair, with the championship standings reflecting the finishing order at the thrilling penultimate round, the Vryburg 400, where the Ford Castrol team of Lance Woolridge and co-driver Elvéne Vonk (334) crossed the line a mere four seconds behind their championship rivals and current points leaders Henk Lategan and Brett Cummings (Toyota), and ahead of Brian Baragwanath/Leonard Cremer (Century).

The Ford Castrol crew, in their Neil Woolridge Motorsport (NWM) EcoBoost-powered Ranger, have claimed two wins from six races this season, and will be giving it everything to add a third victory to their 2021 campaign to give them the best shot at the FIA-class title.

In the drivers' championship, Lance is just nine points behind Lategan, with Baragwanath a further 11 points adrift. With 30 points up for grabs for the race win, there’s everything to play for when the action commences in Parys.

The navigators' title is unfortunately beyond reach for Elvéne, who trails Cummings by 37 points. But, with third-placed Cremer just 16 points adrift, she will be doing everything in her power to guide Woolridge to maximum points in Parys to give him the best chance for championship glory, and secure her runner-up status in the final rankings.

Team-mates Gareth Woolridge and Boyd Dreyer (377) have scored two podiums and three fourth-place finishes in what has been a challenging and frustrating season for the second Ford Castrol Ranger crew. They have been the fastest competitors in the field on several occasions, but luck certainly hasn’t been on their side this year.

Nevertheless, their sheer determination and tenacity has seen them progressively move up the rankings, with Gareth currently fourth overall in the FIA-class driver’s championship, 34 points behind Baragwanath, and six ahead of Chris Visser (Toyota) – so consolidating fourth place will be the younger Woolridge’s primary objective.

Co-driver Boyd still has a chance to claim the last step on the final FIA-class championship podium for navigators, as he trails Cremer by 27 points, with a 26-point margin to fifth-placed Henry Kohne (Century).

“It is fantastic that the fight for the championship goes all the way to the final race of the season,” says Neil Woolridge, NWM team principal. “It’s going to be hard work taking the fight to Toyota, but it was very encouraging to see how close we were in Vryburg, trading places throughout the race.

“As we’ve seen on many occasions in the past, anything can happen in cross country racing, and we will certainly be giving it everything for this race.”

The Class T championship has been dominated by the Neil Woolridge Motorsport-supported Ford Ranger privateers this year, who have been a model of consistency and performance. The father-and-son pairing of Malcolm and Frans Kock (T4) have romped away from the competition, with two wins and three podium finishes handing them an unassailable lead in the championship on 174 points. As a result, they will be crowned Class T champions for 2021, regardless of how the battles play out in Parys.

However, going into the season finale it’s impossible to predict which crews will join them on the championship podium. Christo Rose and Arno Olivier (T58) are currently second on 138 points in the driver’s and navigator’s championships – an impressive feat considering it’s their debut season in the V8-powered NWM Ford Ranger.

They are closely shadowed by Wors Prinsloo and Andre Vermeulen (T41) in the third NWM Ranger on 136 points a piece, while Johan and Werner Horn (Toyota) are hot on their heels, with 135 and 130 points respectively.

The Ford NWM Development Team of Bapi Rubuluza and co-driver Fanifani Meyiwa (T49) continue to make great strides in the series, having finished second at the 4x4 Mega World 400 at the beginning of October, and ending fourth in Vryburg four weeks later.

Bapi is currently seventh in the Class T drivers’ standings on 85 points, with the potential to move up a couple of places if the crew finishes well. Fanifani is placed fifth amongst the Class T navigators.

The race will be based at the Parys Airfield, which will serve as the start/finish and designated service park. Competitors will have a short 15km qualifying race in the morning, followed by two loops of the 175km race route, separated by a scheduled 30-minute service stop.

Although access to the designated service park (DSP) will remain restricted in compliance with the current COVID-19 regulations, there will be plenty of opportunities to watch the cars racing during the event.

Fans can follow all the action and track the position of the crews using the RallySafe app which can be downloaded free of charge for iOS and Android devices. Also, be sure to follow the Ford Performance SA social media channels, listed below, for regular race updates.