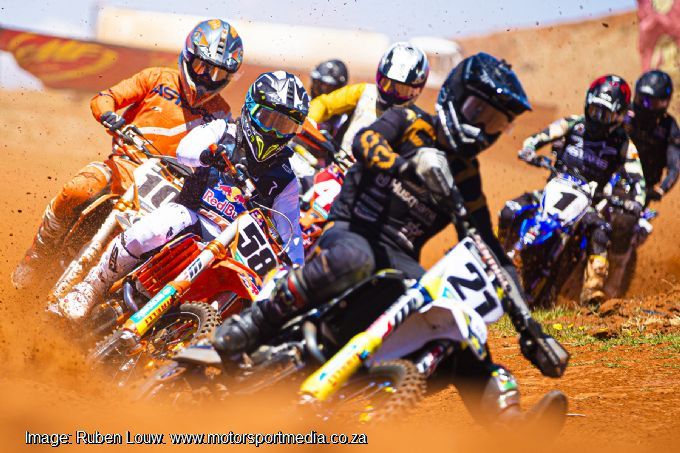 250cc MX2 title is however wide open. Tristan Purdon still leads that chase, but Cameron Durow is close enough behind to take it and Goosen is also still in with a shout. If Durow wins both motos and Goosen, Raynard or any of the others beat Purdon too, Cameron can still steal it. Also keep an eye on KTM trio Jayden Proctor, Stav Orland and Leonard du Toit, and Dalton Venter’s Yamaha among the quarter-litre lot.

Husqvarna rider Grant Frerichs has Ian Topliss's Yamaha to worry about before he takes the madalas MX3 title. Honda duo Bruce Viljoen and Philip Harper will want to upset there and its also not yet over in Ladies Motocross. Kayla Raaff’s Kawasaki has KTM lass Leah Heygate breathing down her neck, while the de Lima sisters, Jadene and Cheyenne are always there or thereabout on their Husqvarnas.

Red Bull KTM lad Jonathan Mlimi need just score a handful of points to wrap up the 2021 High School 125 cc Motocross championship. Judging by recent form, he seems in line to achieve that in the first heat. Title rival Ethan Hoffman will however do his utmost to stem that Mlimi title charge on his Out of Africa Monster Energy Yamaha. And don’t ignore Barend du Toit and Miguel de Waal’s KTMs and Luke Grundy and Wiaan du Plooy’s Husqvarnas.

The 85 cc Pro Mini title chase is however one of the closest in this year’s championship. Trey Cox and his Red Bull KTM will need to bounce back following a less than spectacular showing last time out, if he is to defend his slender title advantage. He has to contend with recent form lad Neil van der Vyver’s Rockstar Husqvarna and double winner last time out, Emmanuel Bako now on another Husqvarna, Alon Orland’s GasGas and Damien Venter’s KTM.

KTM kid Matthew Correia leads another double winner last time out, Tyler Petersen’s Husqvarna in the 85 cc Juniors, with Andrew Venter’s KTMs still in title contention. Corriea however has enough of an advantage to just follow his rivals home to clinch that one. Caden Weise on a Husqvarna and Kassim Hassim and Mienke Cawood’s KTMs are among those who could play interference though.

The 65cc motocross title appears set to be a straight fight between Blade Tilley on a GasGas and Blake Frost’s KTM for championship honours. They are separated by 14 championship points after sharing the wins and seconds last time out. Don’t discount Husqvarna lads Sven Larsen and Nicol Smit, Evan Frost’s KTM and Aiden Henley’s Out of Africa Monster Energy Yamaha among their opposition.

Trenton Kretzmann arrives in Pretoria as the baby 50cc motocross favourite. He’s built up a handy championship lead over a star season. But he never had it all his own way at the last national and as we all know, it’s never over until the fat lady sings. Which is why Aiden Retief’s KTM and Rayden Woolls’ GasGas are waiting to pounce in the wings and Lou Rademayer’s Husqvarna, KTM duo Ross Mackenzie and Kaylin Oosthuizen and the rest are ready to disrupt.

It all goes down at Rhino Park outside Pretoria on Saturday 20 November. That appears to be an excellent way to spend a sunny summer’s Saturday, now that vaccinated spectators can attend racing again.