The war might’ve been won, but the battles will continue to the end in Special Vehicle Championship at TGRSA Parys 400 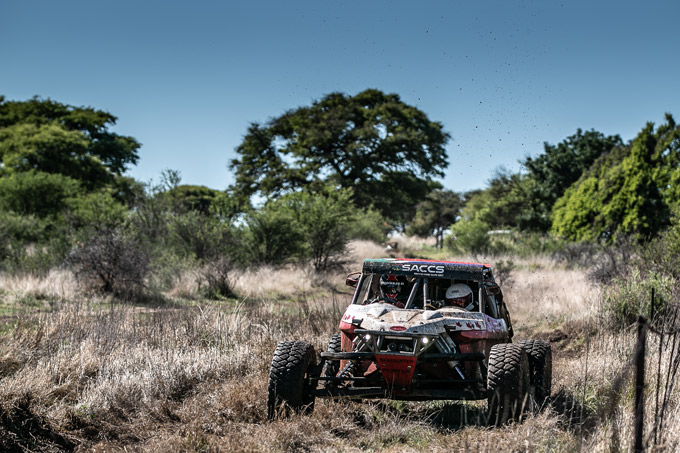 The war for the championship titles in the Special Vehicle Category of the South African National Cross Country Series (SACCS) might have been won, but the battles for podium positions and the final standings will continue at the TGRSA Parys 400, the seventh and final round of the 2021 season that takes place on Saturday, 20 November.

The Overall as well as Class A and Class G champions have secured their titles and will have no pressure, but the rest of the field will go to Parys with the aim to finish the season on the podium or to better their overall and class championship standings. Victories, podium results and race finishes will be the name of the game and Parys will serve as the chosen battlefield.

Lance Trethewey and Adriaan Roets (King Price Xtreme BAT) are the 2021 Overall Special Vehicle Drivers’ and Navigators’ Champions as well as the Class A champions with nothing to lose, however, they enter new territory, and  have upgraded to the Production Vehicle Category where they will compete with a Century Racing CR6 in the FIA Class. The pair were victorious at five of the six previous events with their team-mates, Boela Botes/Jay Pretorius (Porter) claiming the victory at the recent Vryburg 400.

Botes/Pretorius are now second in the Class A championship and another victory will be a perfect way to round off their season.

Botes/Pretorius, are currently third in the overall standings, but are likely to claim second spot in the absence of the Larney brothers who are currently second. The Larney brothers Cecil and Elardus, are the 2021 Class G Side-by-Side Champions, and demonstrated their determination when they took three 10 hour penalties during the season and won the tough TGRSA 1000 Desert Race in Upington and the recent Vryburg 400, in their pursuit of the title.  The pair will unfortunately sit out the last event of the season due to mechanical issues.

In Class A, Lood du Preez/Tiaan Swart (Farmers Meat Stryker) can better their standings with a good result while another race finish or even a win or podium result, will be the perfect way for the Jonck couple of Sandra Labuschagne-Jonck and Jaco (Moto-Netix KEC Racing BAT) to round off their challenging season. Eswatini based John Thomson and Maurice Zermatten (Mormond Zarco) will again be on the start line as will Nicolas Pienaar/Carl Swanepoel (BAT) who competed in their first national cross country event at Vryburg and walked away with good points.

Although the Larney brothers have claimed the Class G title where all the teams are making use of the capable Can-Am Maverick SxS, things could change behind them and teams will have to deliver the goods to ensure the best position in the final standings. Bazil Bezuidenhout/Rikus Hatting are second and will feel the pressure from the youngsters, Kent Rutherford/Kabelo Mokanyane who have proven that they can run with the big names.

Werner Mostert (King Price Xtreme) has acquired the services of young Chris Visser (Jr) – the son of legendary racer, Jannie Visser – to read the notes while brother, Leon is still on light duty after an injury, and will hope for a clean event without technical challenges. Regulars Geoff Minnitt/Gerhard Snyman will be in action and good points can move them up in the standings while Theo Erasmus/Edward Odendaal and Peter Walter/Shaun de Villiers, who missed a few events, will also dust off their race attire for the TGRSA Parys 400.

The Class P title could easily go to Keith and Andrew Makenete (BAT) who just need to finish as they will accumulate enough points to jump from their current third position to take the title.

The TGRSA Parys 400 is a one-day event that will start at 07:30 on Saturday, 20 November with the 15 kilometre Pirelli Qualifying Race to determine the starting order for the main race.

The main race starts at 09:30 and will consist of a 175 kilometre loop teams will need to complete twice to receive the chequered flag. All the action will take place from the Parys Airfield where the Race Headquarters, Designated Service Park (DSP) and Start/Finish will be situated. Spectators are unfortunately still not allowed in the DSP area.

The race can be followed on the RallySafe App that is available for download from the iStore and Google Play Store.