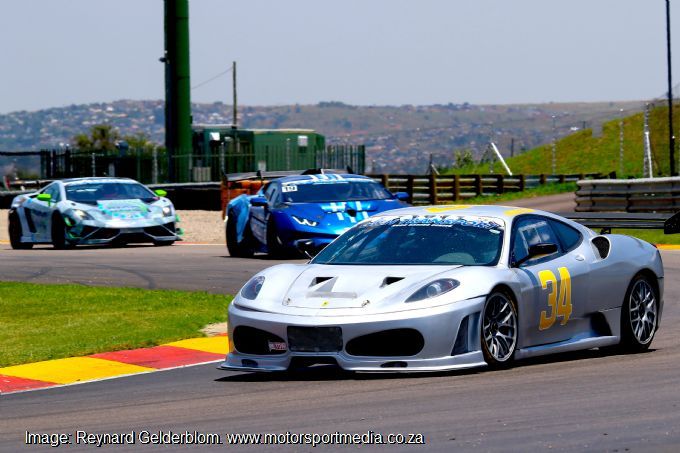 The 2021 G+H Transport Extreme Supercars and the SA National Balance of Performance GT3 championships came to a head as the last two races of the season dodged changeable conditions to deliver unpredictable action at Zwartkops on Saturday. Ferrari men Jonathan du Toit and Charl Arangies came out on top of the overall and GT3 podiums on the day, while Arangies and Gianni Giannoccoro carried off those respective 2021 titles.

Zeelie led Lourero away with Arangies, Morgenrood, Jonathan du Toit and the rest in Pursuit. Then Loureiro stopped and Morgenrood slowed, leaving Zeelie leading Arangies and Jonathan du Toit. The stricken Lexus allowed GT3 trio of Parton and the Giannoccoros to close in and deliver a tight battle with Mark du Toit closing in. Morgenrood eventually slowed further to leave the GT3 quartet to duke it out between them.

Then second man Arangies spun in turn 4 to rejoin well down, before leader Zeelie slowed and stopped on the final lap. That left class A man Jonathan du Toit to a last gasp win from GT3 trio, Gianni Giannoccaro who had passed and left Greg Parton to fight off Mark du Toit for fourth. Ant Blunden put one over slowing GT3 man Ricky Giannoccaro for sixth, Deon du Plessis put the recovering Arangies between him and Class C rival Jackson, and Letlaka and Sanne were next home.

The second heat proved a shake-up when Arangies made a bold move into turn 1 to take the lead and clear off. He left Zeelie with Morgenrood’s Lexus all over the back of his rapid little MR2. Behind them, Jono du Toit had Lambo trio, Ricky and Gianni Giannoccoro and Parton on his case. Zeelie soon shook Morgenrood off and left him to fend off du Toit and the Lambos. But Zeelie once again slowed on the last lap to let Morgenrood through to third from Zeelie.

So, Charl Arangies is the overall G+H Transport Extreme Supercars champion. He used five cars — a Lamborghini Huracan and a Gallardo, a Porsche 911 and two Ferraris, a 360 and this F430 to do the trick. And Gianni Giannoccoro and his G+H Lamborghini Gallardo Supertrofeo are the 2021 G+H Transport National Balance of Performance GT3 champions. The class champions are Ben Morgenrood in A+ Xolile Letlaka  in A, Ant Blunden in B,  Marius Jackson C and Uli Sanne in Class D.

The 2022 G+H Transport Extreme Supercars Championship gets going all over again at the annual Zwartkops Passion for Speed, which opens a new South African racing season early in February.