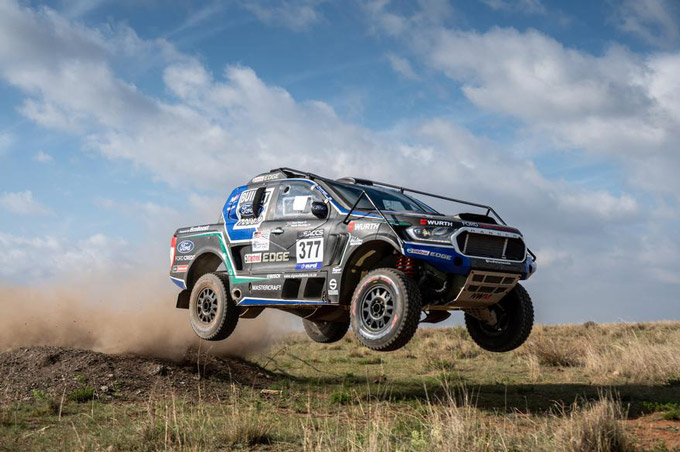 One of the most exciting and competitive South African Cross Country Series (SACCS) championships in many years was wrapped up this weekend, with the Ford Castrol Cross Country Team of Lance Woolridge and Elvéne Vonk (334) finishing second overall in the Production Vehicle and FIA-class standings.

In the first season competing with the all-new 3.5-litre EcoBoost V6-powered Ford Ranger, designed and built by Neil Woolridge Motorsport (NWM), Woolridge and Vonk rounded off the year with a second-place finish at the Toyota Gazoo Racing SA Parys 400 in the Free State, cementing their runner-up positions in the title chase for drivers and navigators.

It was a close and thrilling affair for most of the season, as the leading Ford crew scored two victories and three podium finishes – but it wasn’t quite enough, with the title going to the Toyota crew of Henk Lategan and Brett Cummings.

“We knew coming into this race it was going to be a tough task to beat Henk and Brett, and unfortunately on the first loop I just didn’t feel confident in the car’s handling, so this cost us a lot of time,” Lance said. “It’s disappointing to lose out on the title when we’ve been so close, including winning first time out in Dullstroom, followed up by the victory at the 4x4 Mega World race, and then losing out in Vryburg by just four seconds.

“However our non-finish due to a minor technical issue at the Sugarbelt 400 is what cost us the championship,” Lance added. “But I think we’ve had a great season, and the fact that we’ve been able to make it so competitive this year is testament to the great team we have. So let’s see what next year brings with the new T1+ regulations.”

The second FIA-class Ford Ranger pairing of Gareth Woolridge and Boyd Dreyer (377) saw their frustrating season end in disappointment. They posted fastest stage times on several occasions this year, but luck certainly hasn’t been on their side – and this played out in the season finale too. The talented young crew were within 28 seconds of the leaders at the mid-way point at the Parys race, but they were unfortunately caught out braking from high speed in a tricky sand section that pitched the car sideways, leading to a fairly minor roll.

They were able to continue for a short distance put a damaged oil cooler led to their retirement. Nevertheless, they scored two podiums and finished fourth in the FIA-class championship, and will undoubtedly be in contention next year.

“It’s been a very difficult season for us,” Gareth said. “So often we’ve been leading or fighting for the victory, only for it to slip away from us. The first half of the race today was fantastic and we were chasing hard, with less than half a minute separating us from the lead. The car suddenly snapped sideways under braking after a long 180km/h straight. I caught the slide on full lock, but we hit a sand bank that led to the roll.

“The car landed back on the wheels, and we didn’t lose much time getting going again, but we soon smelled oil and had to stop,” Gareth explained. “As frustrating as this is, the positive takeaway is that we have been fast and challenging for wins, so now we look forward to the 2022 season and aim for better results.”

For NWM team principal, Neil Woolridge, the Parys event was a mixed bag of emotions. “We did everything we could to give Lance and Elvéne the chance to fight for the title, but unfortunately it wasn’t quite enough. On the flip side, we won two of the seven races this year and stood on the podium on six of the events. For a brand-new car with a completely new engine it is an exceptional result, especially competing against the big budget Toyota has, and they aren’t multiple Dakar Rally and international cross country winners for nothing.

“Our team can be extremely proud of the results this year, which contributed to the very close racing, and our ability to take the title fight right down to the wire,” Neil added. “We’re taking this knowledge and experience forward to prepare the cars for the T1+ rules for next year with the wider dimensions, bigger tyres and longer travel suspension. We’ll come back fighting fit and ready for action next year.”

The Neil Woolridge Motorsport-supported privateer teams proved the class of their field this year, competing with the V8-powered Rangers in Class T.

Malcolm and Frans Kock (T4) took the title at the previous round in Vryburg, and weren’t able to make the final race. This left Wors Prinsloo/Andre Vermeulen (T41) and Christo Rose/Arno Olivier (T58) to wrestle over the final podium positions, along with the ever-present threat from the Toyota crew of Johan and Werner Horn.

The race win ultimately went to Prinsloo/Vermeulen as they secured their second victory of the season, which promoted them to second in the final Class T standings for 2021. Rose and Olivier concluded their first season in Class T as runners-up in Parys and third in the championship, with their Toyota rivals retiring with a blown engine.

“I am delighted with our Class T results this year, with our privateers doing NWM and Ford proud by winning four of the seven races, and taking the lion’s share of the podiums throughout the season,” Neil Woolridge said. “It’s so important for the SA Cross Country Series to have the privateers involved at this level of the sport, and contributing to the spectacle with lots of close racing.”

“The whole team is extremely proud of what Bapi and Fanifani have achieved this year,” Neil said. “We as experienced competitors often don’t realise how difficult it is for a new team to come into the sport and learn how to drive a specially developed, high-performance V8-powered race car in this type of terrain. Yes, the Development Team had its difficulties this year, and they were down in the dumps after crashing out at the Desert Race.

“But they never gave up and were rewarded with a second-place finish at the 4x4 Mega World 400. That podium was a very special moment for all of us,” Neil added. “The crew has learned a lot, they gained a lot of confidence and their pace has improved consistently, giving them two fourth places in a row. The sport desperately needs to be more inclusive and diverse, and to attract wider interest and participation amongst competitors and fans alike. Bapi and Fanifani are great ambassadors for cross country racing.”